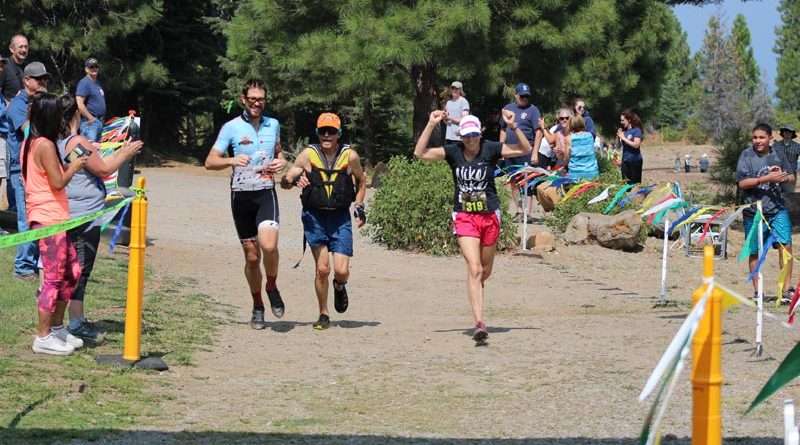 Last year the three-member team of the North Arm Regulars, consisting of, from left: Michael Leonard of Reno, John Shower of Greenville and Doreen Pinelli of Santa Rosa won their division. The Courage Triathlon encompasses a 2.8-mile run, followed by a 7.1-mile bike ride, and ends with a 4.1-mile voyage kayaking along the west shore of Lake Almanor.
News
August 21, 2019August 26, 2019 Stacy Fisher, Staff Writer

The fifth annual Courage Triathlon charity event, under the auspices of Courage Worldwide and locally organized by Courage Triathlon coordinator Jo Vice, consists of running, biking and kayaking, with individuals as well as three-person teams competing for handcrafted prizes by the Edge Art Gallery in Newport, Oregon.

The fundraiser starts and ends at Plumas Pines Resort, 3000 Almanor Drive West in Canyon Dam this Saturday, Aug. 24, with the start of the race at 10 a.m. sharp.

Courage Worldwide, a non-profit founded by Jenny Williamson and headquartered in Sacramento is designed to help house teen girls 18 years of age and young female adults who have been sexually abused through the sex trafficking trade.

The triathlon features a 14-mile loop encompassing a 2.8-mile run, followed by a 7.1-mile bike ride, and ending with a final leg that consists of a 4.1-mile kayaking voyage along the west shore of Lake Almanor, and then a short, final run to the finish line.

Age categories for competitors are broken down into groupings, from teenagers through 70 and older.

Vice said the idea for a triathlon originally began with Courage Ambassador Dawn Hershberger’s efforts to create a fundraiser with a group of law enforcement officers trying to find ways to raise money for a cause that has now become a yearly event in Plumas County.

Noting that the sex trafficking trade is a multi-billion dollar industry in the United States alone, Vice said the triathlon is extremely important to the mission of Courage Worldwide, that of protecting as many victims of sex trafficking as possible and increasing community awareness.

To participate in the Courage Triathlon, competitors pay $90 per individual, or $210 for a three-person team, with 100 percent of the proceeds going directly to providing services for victims rescued from sexual exploitation.

In addition to participating as individual racers, a number of fire and law enforcement agencies participate as team members in the annual triathlon or provide other assistance.

They’re a big part of the triathlon, said Vice, providing support through their partnership with the organizers, particularly the CHP, which assists in coordinating traffic, as well as the USFS-Almanor District and other groups.

As it does each year, the Bizz Running Company times the race. Doug Cain Sound productions will provide music during the event.

Check out the Courage Worldwide website at: courageworldwide.org to donate (under the drop menu labeled Take Action), and for additional information on the organization.

For further information on the Courage Triathlon in Lake Almanor, contact Jo Vice at 249-3228 or Dawn Hershberger at 310-2768.