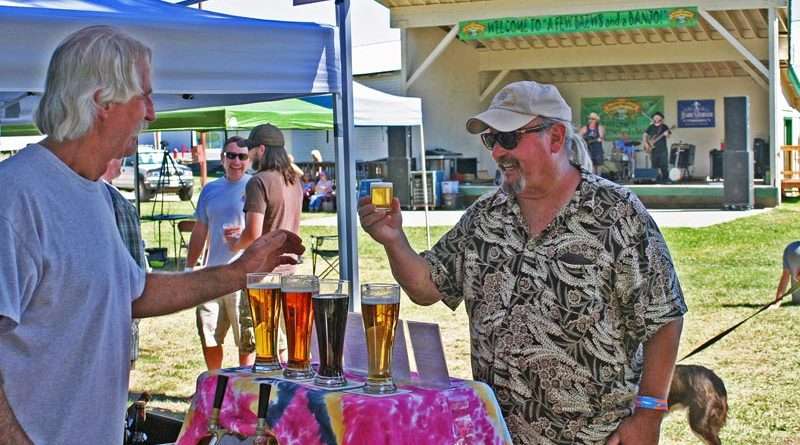 What could be better on a hot summer day than to delight in a few glasses of ice-cold beer? Chester Park will once again be the venue for A Few Brews & A Banjo, featuring beer tasting and music Saturday, June 22, starting at 2 p.m. Photo by Stacy Fisher
News
June 19, 2019June 18, 2019 Staff

What could be better on a hot summer day than to delight in a few glasses of ice-cold beer? On Saturday, June 22, starting at 2 p.m., Chester Park will once again be the venue for A Few Brews & A Banjo, where a sizable crowd of beer lovers gather at the popular event every year to wet their whistles — an event that has been helping to raise funds for area schools’ arts programs since 2004.

Produced in collaboration with Plumas Arts in Quincy (plumasarts.org), guests spend a perfect afternoon in a scenic park alongside the North Fork of the Feather River.

Sip on a variety of tasty micro-brews from local breweries, with beer samplings from 2 p.m. to 7 p.m. There will also be nonalcoholic beverages and food for sale by Sierra Smoke Pit.

Presale discount beer tasting tickets for $25 are available at Plumas Bank in Chester and B&B booksellers, 278 Main St. At the gate the ticket price will be $30.

The event is staffed by community volunteers who help with the setup, beer serving, cleanup, takedown, and all other aspects of the event.

Relentless was created in 2018 in Lassen County. Guitarist Mike Pepetone and his vocalist wife Julianne Pepetone have performed locally since 1992 in numerous bands, including the Saloonatics Blues Band that won the 2001 Siskiyou Blues Competition. Thomas Braun (bass) has worked with the Susanville Symphony since 2004. Dave “Pee Wee” Besancon (drums, guitar), another long-time music veteran, rounds out the basic Relentless lineup. They play a variety of their own compositions and quality songs by other composers, including rock, blues, country and folk music. Often, Gary Renaud (voice, guitar), a former Portola resident, joins in with his own original songs.

The result is an eclectic entertainment experience unique in Northern California.

Hot Flash is a six-piece party band from Northern California that plays everything from Chuck Berry to Prince.