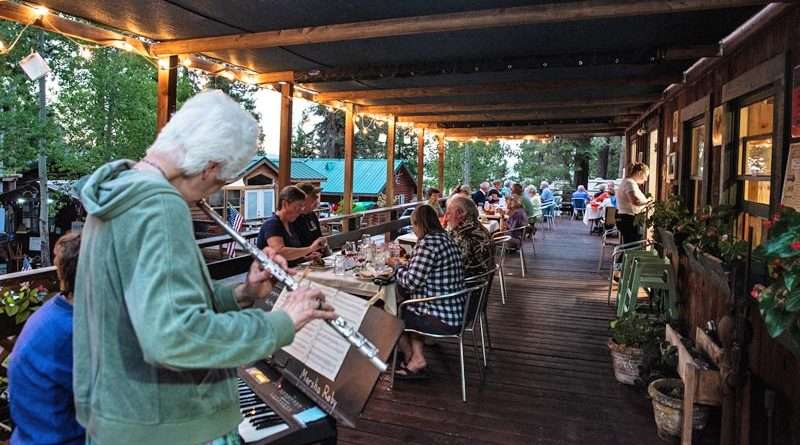 A beautiful setting on a perfect evening is how every fundraising event would like to start. Then you add soothing music and a delicious Mediterranean-themed meal and it’s hard to imagine how it gets any better. Here Marsha Roby accompanies flautist Judith Musafia as contented diners savor the evening’s events.
News
September 4, 2019 Gregg Scott, Staff Writer

The culinary prowess of Carol Franchetti and her crew at Carol’s Prattville Café became readily evident as they created a five-course Mediterranean feast Aug. 24 as a fundraising event for the Almanor Basin Food Pantry.

The weather was perfect, the setting ideal, the conversation exhilarating, the classical background music perfect and the food was “magnific.”

Each year Carol’s has hosted a themed dinner in support of the food pantry and seemingly each year it gets better and better.

Several tables of local art and donations drew the attention of many patrons at both the 5 and 7 p.m. seating as well as some nice drawing prizes.

The air was filled with the melodious tones played by Marsha Roby on the piano and Judith Musafia playing the flute.

Without a doubt the star of the evening was the delicious five course meal that included an antipasto plate with different cheeses, olives and prosciutto-wrapped cantaloupe followed by a Tuscan bean soup in a Rustic Italian bread bowl.

A Caesar salad with house made dressing preceded the diner’s choice of braised lamb shanks on a bed of polenta or salmon pomodoro with linguini.

The piece de resistance was, of course, the raspberry crème tiramisu that just melted in your mouth.

The Almanor Basin Food Pantry extends a special thank you to all — patrons and donors alike — that made the evening so successful.