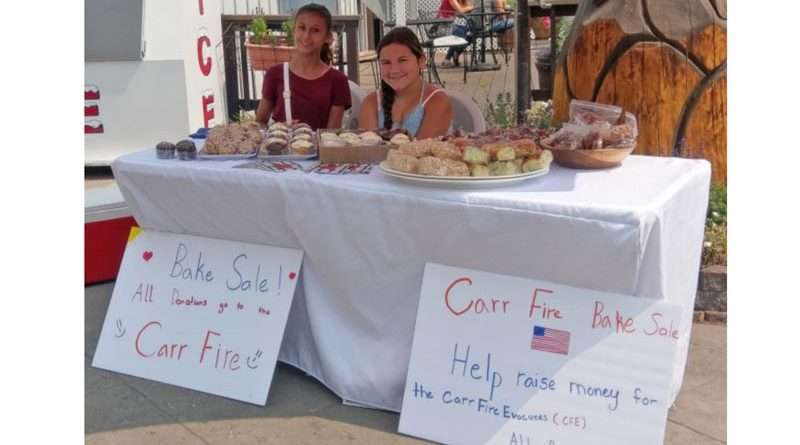 Carli Scott, left, and Jacy Door open up their bake sale outside Peninsula Market on Aug. 2. The girls were staying in the family vacation home due to being evacuated from their Redding home as a result of the Carr Fire. Photo submitted
News
August 17, 2018August 15, 2018 Gregg Scott, Staff Writer

The family of Jim and Paula Scott, who have a vacation home at Lake Almanor, were just one of the families affected by evacuation orders due to the Carr Fire.

Scott said he was very fortunate to have a place here to move to while they await the destiny of their home in Redding.

They relocated to their Peninsula Drive home along with Scott’s parents, 12-year-old Carli Scott, and her 11-year-old cousin, Jacy Door, visiting from Oakdale.

The two girls decided that they couldn’t sit idly by without trying to help some of the neighbors and other residents that may not be quite so fortunate.

Knowing their area was being ravaged by the fire and with school beginning in just a couple of weeks, young Miss Scott wanted to do something to raise money to help her affected schoolmates at Grant Elementary School in Redding so they would be ready for the new school year.

The girls decided that the answer to their quest was to have a bake sale.

They approached Wally and Chris Blem, owners of Peninsula Market, and asked if they could set up a table outside the store to have a bake sale to help victims of the Carr Fire.

The Blems readily agreed and a plan was made. That evening the girls called Jim Scott with their plans and he told them that his company, Advanced Concepts, would match and amount they could raise through the bake sale.

The young ladies spent the rest of the night baking.

The next morning, Thursday, Aug. 2, they set up their table and signage and began their mission of aid.

Before the day was over they had sold out all that they had baked and had raised over $600.

They quickly realized that they could not bake enough on their own to keep the effort going and it didn’t take long for help to arrive.

In true Lake Almanor fashion generous neighbors Patti Roarty and Janis Porter quickly jumped in to baking mode and donated both time and ingredients to the cause.

The girls continued the bake sale from Thursday through Saturday and when all was tallied up they raised a total of $2,065.

With the matching funds from Advanced Concepts they are able to donate $4,130 to students in need at Grant Elementary School.

The entire Scott family expressed unending gratitude to all the Lake Almanor folks that made this possible.

Scott stated, “The generosity of our neighbors, friends and the Lake Almanor people is awe inspiring.”

He also said that he is so proud of his wife, daughter and niece for their efforts to care for others.

“Even though we personally have years of recovery ahead of us, we are much more fortunate than many,” he added.

If anyone knows of a family in the Grant School area that has lost their home, Jim Scott asked that they contact him at 222-2600.