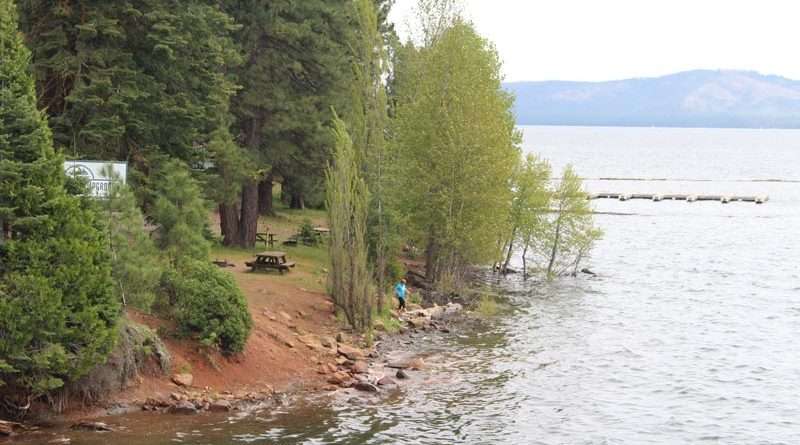 PG&E announced that Lake Almanor, shown here, and Bucks Lake water levels are projected to be slightly above normal this summer thanks to strong late-season precipitation. Photo by Stacy Fisher
News
May 20, 2018May 16, 2018 Staff

Pacific Gas and Electric Company announced May 9 that Lake Almanor and Bucks Lake water levels are projected to be slightly above normal this summer thanks to strong late-season precipitation.

PG&E announced the lake level projections today at the 2105 Lake Level Committee meeting in Chico, which is held most years to review and discuss PG&E’s planned water operations for Lake Almanor and Bucks Lake for the remainder of the year. The committee name refers to Federal Energy Regulatory Commission Project no. 2105, which is the license number for PG&E’s Upper North Fork of the Feather River Hydroelectric Project.

Kevin Richards, a hydrologist in PG&E’s power generation department, reported PG&E plans its operations to balance recreation, the environment, electric power generation and other needs. Despite below average precipitation for the northern Sierra Nevada and southern Cascades mountain ranges, enough rain and snow fell during March and April that Lake Almanor is expected to be about 2 feet higher than normal this summer.

This year, based on current data, a moderate summer electrical demand and historical modeling, PG&E projects Lake Almanor levels will reach approximately 4,491 feet elevation by July 4, which is about 3 feet higher than normal for that date. The level is projected to be approximately 4,485 feet by Labor Day.

Lake Almanor receives much of its water from volcanic aquifers in the Southern Cascade Mountain Range, which release a steady year-round flow of water from springs.

Bucks Lake on the other hand is in the Sierra Nevada Mountain Range and largely relies on surface runoff from the current season.

PG&E expects Butt Valley Reservoir to be within normal operating range this summer.

PG&E encourages the public to take appropriate safety precautions when recreating in and near water.

Obey all warning signs and restrictive buoys while swimming or boating. Use the “buddy system.” Never fish, swim, boat or raft alone. Don’t dive or jump into unfamiliar water; shallow water or submerged trees or rocks could cause serious injury.