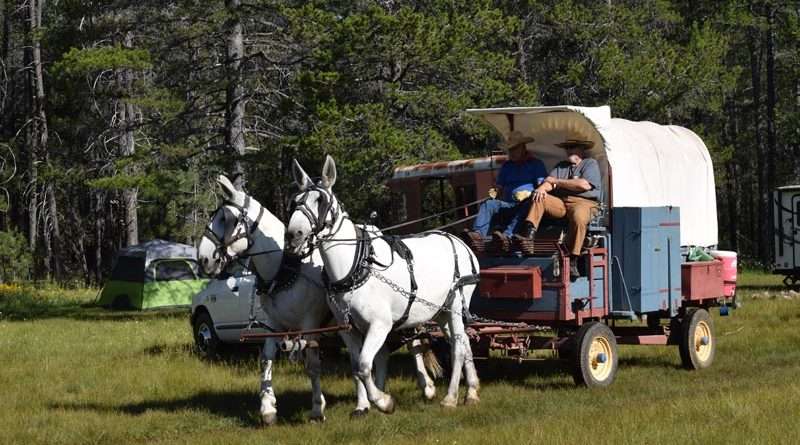 Twenty thousand pioneers left the East that year, following the Lassen Trail on their way to the gold fields of California and the valleys of Oregon. Duck Lake was a welcome sight for the travelers and their livestock.

On July 7, 2019, a smaller group sat around their covered wagons, cooking and visiting, while their horses and mules grazed in the meadow. The Golden State Draft Horse and Mule Club gathered for its annual wagon train, following the Lassen Trail.

The Van Ecks were ably assisted around camp and on the wagon seat by grandchildren Luke and Emma.

Joining the group mid-week were David and Julie Vasquez, owners of Wine Country Wedding Carriages, with their towering Percheron geldings, Jack and Duke. They were assisted by their granddaughter Kaylynn.

The group was smaller than usual, as the late, wet spring caused the trip to be postponed until the roads dried and many regulars could not get off work.

New to the group were local women Jewdy Lambert and Dorothy Edwards, of Quincy, and Donnal Nichols of Cromberg.

Dorothy brought her Friesian gelding, Fetze TCF (Isaac) and a small, sturdy marathon carriage. Nichols rode with Edwards and served as the group’s photographer. Jewdy Lambert  sadly lost her Haflinger driving horse not long before the trip, so she was grateful for the chance to ride in Zeke’s handsome, homemade wagon.

At 9 a.m. the next morning all the horses and mules were hitched to their wagons, and wagon master Darnell led the group out of camp on the road to McCoy Reservoir, 7 miles away.

Kit and Kate kept up a steady walk past beautiful meadows and through pine forests.

When the group reached the edge of McCoy Reservoir, Darnell turned his mules into an open area surrounded by pines. Each draft team was eased up to a tree until the tip of the wagon pole touched the trunk.

Then the “swamper” (passenger/assistant) swung down off the wagon seat, untied the halter ropes and tied the team to the tree, where they rested quietly.

Luke and Emma grabbed their fishing poles and hurried to the reservoir while the rest of the group ate a quick lunch. Then teams were untied, grandkids called and all enjoyed the sedate pace and the sounds of wagons and teams as we rolled toward camp.

The second morning the group left Duck Lake and briefly followed the highway before turning onto a dirt road leading to the historic 101 Ranch.

Our route was even more beautiful than the previous day’s, taking us across a large meadow divided by a sparkling creek, up a short hill past a flume, and through a series of gates onto the ranch.

Bright pink snow plants and tall pine drops grew under the trees. Soon we entered an enormous valley, and spotted the ranch house in the distance. We eyed a large herd of cows and big calves, accompanied by two bulls, as they milled around near our road.

Suddenly one of them must have mooed, “Food wagons,” because they all galloped toward us! The horses and mules held their ground, and the herd swung around and passed behind us.

Having been warned that there was logging going on just beyond the next ridge, Darnell turned the group around for the trip back to camp.

Much of the land the yearly wagon train camps on and drives through is private property belonging to ranchers and logging companies. Darnell makes all the arrangements for permission to pass and insurance coverage. The club certainly appreciates the privilege of coming every year!

The next morning brought rest for the horses and mules, but a fascinating day of history for Lambert, Nichols, Edwards and their new friends.  Everyone packed into pickup trucks and drove to Bridge Creek, along the Noble’s Emigrant Trail.

There in a large meadow, near a meandering creek, lies the grave of Nancy Ann Allen, a 25-year-old pioneer woman. She died along the trail Sept. 27, 1857, and was quickly buried so the wagon train could move on. Her husband stayed behind a day to grieve and to carve her name into the face of a lava rock. Many died on the trip west, but Nancy’s is one of the few graves marked and preserved until the present day.

Back at camp, Edwards and Nichols walked the short distance to the Duck Lake Lassen Trail marker. Nichols had her own family story of the Lassen Trail to share.

Her grandmother used to tell her about a nephew, one of 21 children, who grew tired of the endless hard work required to support the family and its homestead.

One day he ran away, and she never heard from him again. A few months ago, Nichols’ son-in-law was given a coffee table book on the history of Jordon Valley. As Nichols looked through it, she saw the name of her grandmother’s missing nephew, Jesse Scott.

After reading the names and dates associated with his family, and comparing them with her own family history, it became clear that this was indeed the nephew who ran away so long ago.

Jesse, a teenager, met up with some sheepherders and helped drive the flock all the way up the Lassen/Applegate Trail and into Jordan Valley, where he settled, married and raised his family.

The last day’s drive was a reprise of the shady forests and mountain meadows along the way to the 101 Ranch. What a joy to be out with horses and friends on such a morning! The day promised to be hot though, so the group turned around at the flume and headed back to Duck Lake to pack up and make plans for next year.