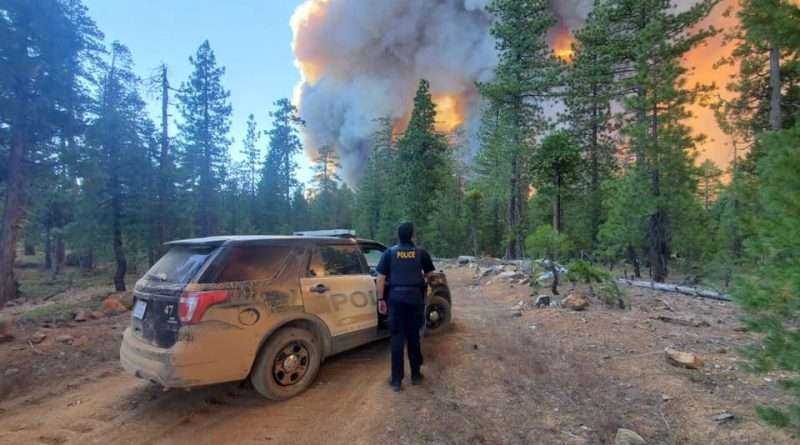 An officer with the Paradise Police Department is stationed near Bucks Lake east of Highway 70 northwest of Silver Lake. Paradise is among the mutual aid response helping protect people and property during the Dixie Fire. Photo courtesy of the Paradise Police Officers Association
News
July 21, 2021July 22, 2021 Editor

UPDATE 12:30 p.m.: Officials are setting up incident command and fire camp at the Plumas Sierra County fairgrounds. The plan is for the fairgrounds to host the firefighters until Aug. 7, and then it would need to be relocated to make way for the livestock portion of the fair that gets underway that week, culminating in the livestock auction Aug. 15. The remaining portion of the fair runs from Aug. 19-22.

UPDATE 11:30 a.m.: Post offices in Twain and Meadow Valley are temporarily closed. Customers should pick up their mail at the Quincy Post Office.

UPDATE 10:20 a.m.: The communities along the West Shore of Lake Almanor, as well as Canyon Dam, are under mandatory evacuation orders. An evacuation center has been established at the Chester Memorial Hall.

Chester, the Lake Almanor Peninsula and the East Shore are under an evacuation warning. Seneca Healthcare has activated its incident command protocols.

Original story: It was another big night on the Dixie Fire. As Plumas County residents went to bed the fire was just over 61,000 acres; this morning it is pegged at 85,479 acres and remains 15 percent contained.

But those who live in the local communities know that help is arriving. More fire trucks and firefighters are descending on Plumas County, and officials are working on setting up a second incident command center in Quincy.

According to this morning’s latest report, the fire remained active overnight with uphill runs, tree torching and long-range spotting. The fire is predicted to continue its northeast march with up to 2 to 3 miles of new spread.

Overnight crews focused on structure protection and reinforcing lines, remnants of the Bear Fire near Bucks Lake and Meadow Valley, and the Chips Fire near the West Shore of Almanor.

The official structure loss is listed at two, but assessment teams are needed to begin tabulating losses.

The evacuation warnings remain the same and can be seen by clicking here.

This story will be updated throughout the day as more information becomes available. 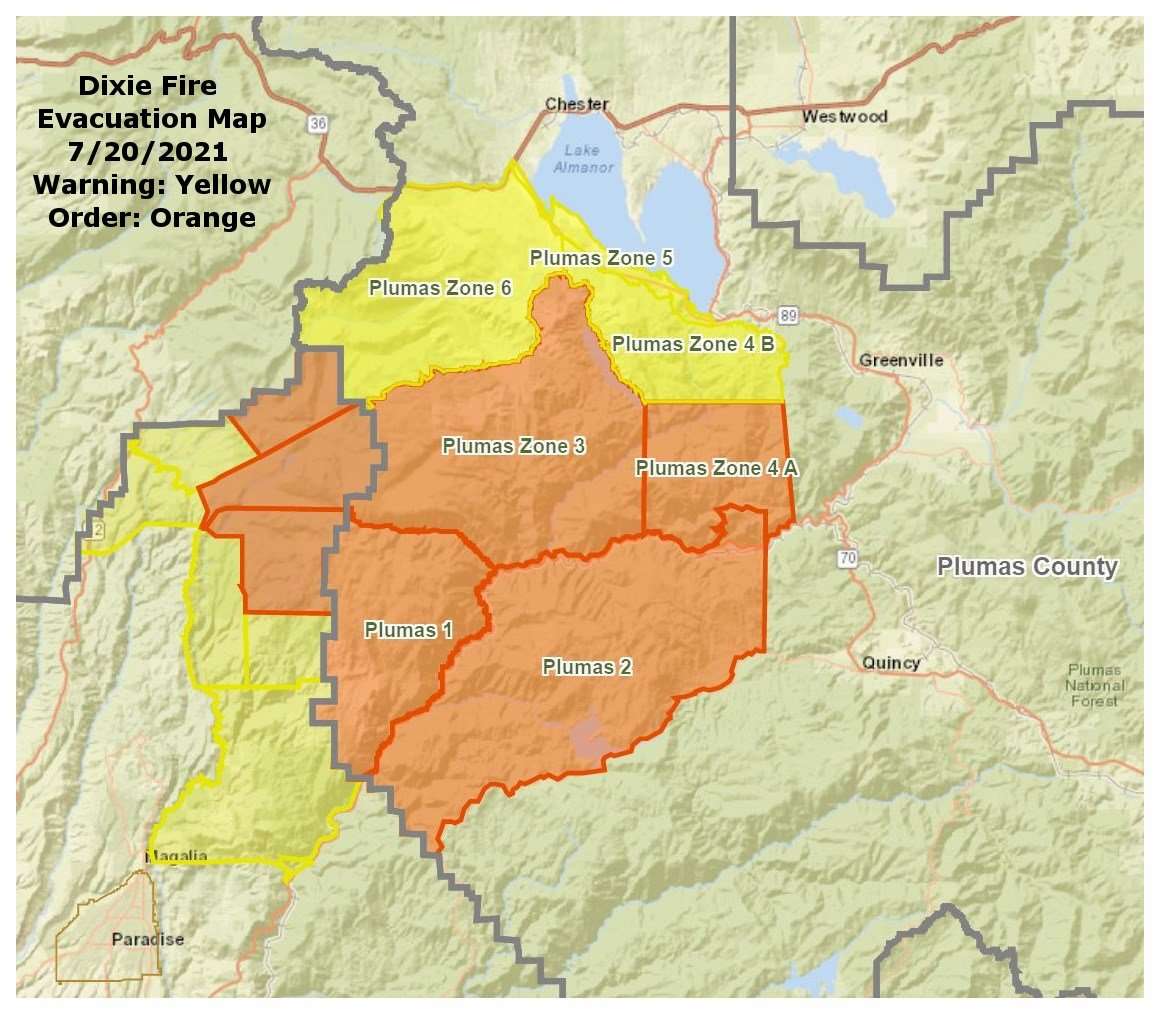 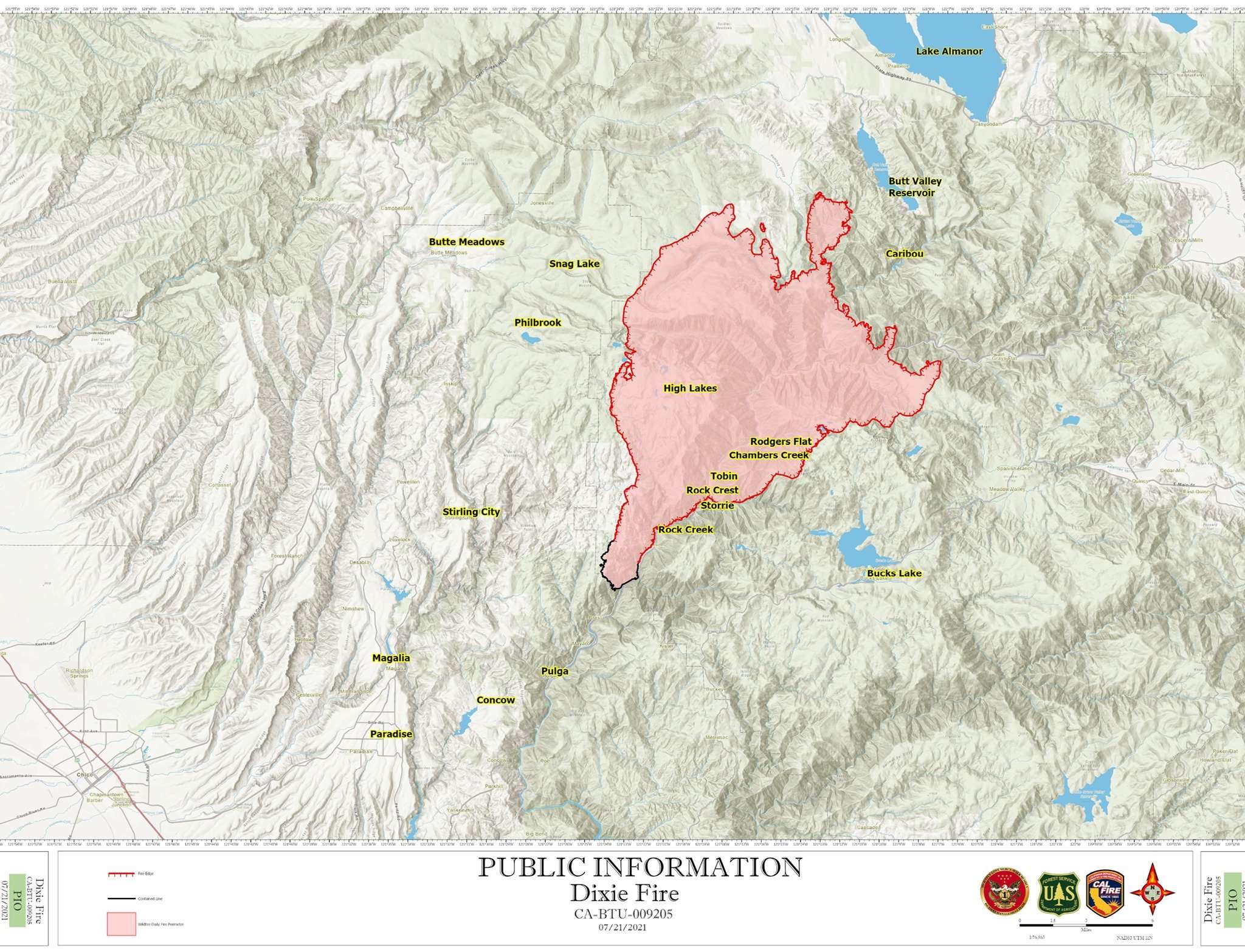 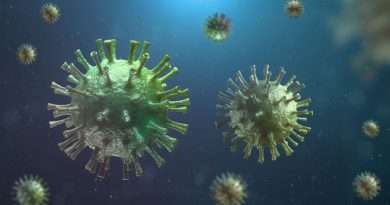 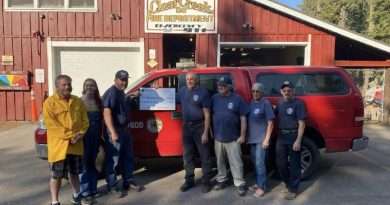 With the community’s help, the Clear Creek Fire Department in neighboring Lassen County was able to present a check to…

In an effort to provide family fun in a COVID-friendly environment, Plumas Rural Services presents the second in its series…

The Governor’s Office announced Sept. 16 the allocation of $138 million for wildfire prevention grants statewide to help mitigate the… 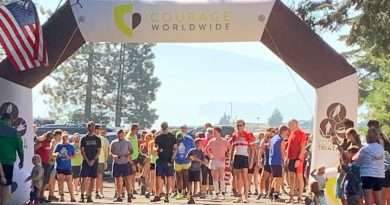 Seventh Annual Courage Triathlon: We run so they don’t have to

Submitted by Katherine Sansone Special to Plumas News A perfect day was enjoyed by over 80 athletes who ran, biked…