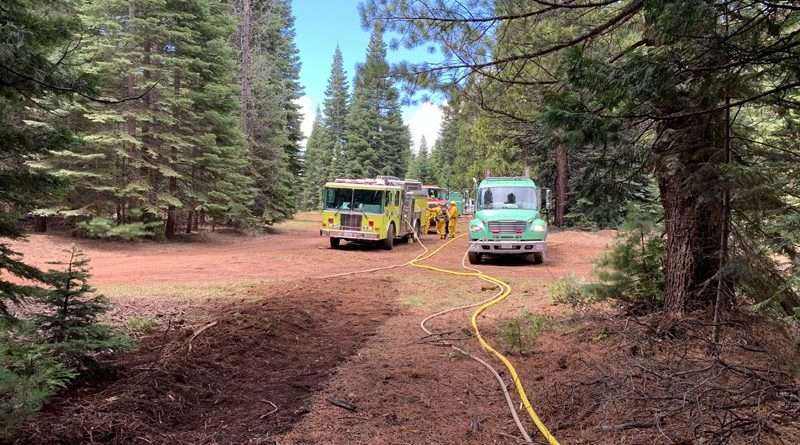 Fire personnel the Forest Service, CalFire and virtually every fire department in the Almanor Basin joined forces to complete the simulated plan of attack. Here is just the beginning of approximately 2 miles of hand-cut fire line that was completed along with an equivalent amount of hose that was pulled.
News
June 26, 2019June 30, 2019 Gregg Scott, Staff Writer

The Peninsula Fire Protection District (PFPD) joined with Plumas County Office of Emergency Services (Plumas OES), CalFire, the U.S.D.A. Forest Service and numerous other agencies as they participated in a huge wildfire training exercise on May 29.

To begin the roughly 5-hour exercise, about 100 people representing the many agencies gathered at the Chester/Lake Almanor Snowmobile Park for a planning/overview session.

The units were then designated their areas of responsibilities and deployed for maximum effect.

The exercise scenario was predicated on a fire that had started on the Lake Almanor Peninsula.

Fire suppression units from PFPD, Chester, Hamilton Branch, Almanor West, Westwood, Forest Service and CalFire were deployed as they carried out the simulated plan of attack.

These units hand cut approximately 2 miles of firebreak and pulled that much hose along the their line.

Seneca Hospital responded to faux emergency victims that were air-flighted in by PHI Air Medical and transported by ambulance.

The planning for the overall exercise was completed by the Plumas OES, at the request of PFPD, as part of the county’s annual trainings through the California Office of Emergency Services.

With the horrific tragedies dealt to northern California last year with the Carr and Camp fires, the prospect of another such catastrophe is paramount in the minds of most residents and emergency response agencies.

The objectives of the training are to test the capabilities of the responding agencies, improve communication and coordination between agencies, and improve response time in case of a real emergency.

An important aspect stressed during the training was the use of the Incident Command System that is designed to make more efficient use of available resources during any emergency and to familiarize the personnel from different agencies with their counterparts in case of a real incident.

The interactions by participating agencies within the affected community areas will hopefully “spark” an interest by homeowners to learn more about being Firewise.

The original notice regarding this training included some useful information for all Lake Almanor area residents.

Community Information: Within the Peninsula Fire Protection District, Lake Almanor Country Club, Lake Almanor Pines, Chester and Almanor West there are Firewise Community Committees. These groups have Firewise activities, outreach and preparedness education year ‘round on making your home and community better prepared for wildfires. Contact them through your local fire department for information about getting involved.