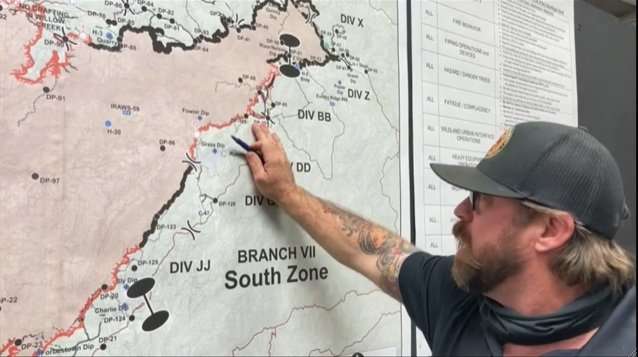 Jake Cagle became the face of the firefighters' response to the North Complex Fire. His last briefing is scheduled for Sept. 23, before he and the rest of his Type 1 Team will depart after an extended stay in Plumas County.
News
September 22, 2020September 25, 2020 Editor

As with everything else on the North Complex Fire there is bad news and good news to report this morning — the bad news is that the Type 1 Incident Command Team that local residents have come to know is leaving, but the good news is that a Type 2 team will take its place; meaning the fire is considered to be less of a threat.

Typically incident command teams are assigned to a fire for three to 14 days and then replaced by another — such was the case with the first Type 1 team dispatched to the North Complex Fire – then known as the Bear, the Sheep and the Claremont.

The Sheep was put to bed sooner, and a Type 2 team arrived to mop up that fire close to Susanville, while another Type 1 team arrived to handle the Bear and Claremont blazes. That team also should have transitioned after 14 days, but due to the critical juncture of the fire at the time and the scarcity of resources, it was held another seven days. The time is up.

And with the departure of this Type 1 Team, headed by Jay Kurth, goes Jake Cagle, the daily face of the fire response. He has become familiar to local residents with his video updates and provided a calm, reassuring presence that drew a quite a following.

This wasn’t his first visit to Plumas County; he was assigned to last year’s Walker Fire near Greenville. And that’s been his work for the past 14 years — traveling from natural disaster to natural disaster  — usually fire, but now it’s time for a brief break.

During an interview Monday evening, Cagle said his last North Complex briefing will be held Sept. 23. Then he will help with the transition and head home to Southern California on Sept. 25 where he is a station chief for Kern County Fire.

It will give him a chance to see his three children, ranging in age from 10 to 15, before he heads off to a new assignment Oct. 1. It’s a schedule they have become used to. Before his work on disasters, Cagle was a Hotshot, which took him away from home for weeks at a time.

While Cagle mostly works fires, he has responded to hurricanes and health emergencies. “I rarely miss an assignment,” he said. Earlier this year Cagle spent months assigned to a COVID response team, before being sent to his first fire of the season in July. With resources across the state stretched so thin, Cagle said he worked eight weeks with one day off and has been putting in a lot of overtime.

As for his daily updates, Cagle has gathered quite a number of fans who regularly post to Facebook with comments such as: “Your delivery of all updates have been reassuring even when not so uplifting.”

They have also veered to the personal, and the humorous: “Wow, you became my BFF at night. Better than the State Farm Jake. And I bet you do not have khakis on.”

Jake said he’s too busy to go on Facebook and read the comments, “but they get shared with me, usually by the PIOs (public information officers),” he said.

Cagle has been using Facebook as a tool since 2012, and said it’s becoming an increasing valuable resource to share information. When asked if he will have a going away message for the community during his last briefing, Cagle said that he would. “It’s been an honor to be here,” he said.