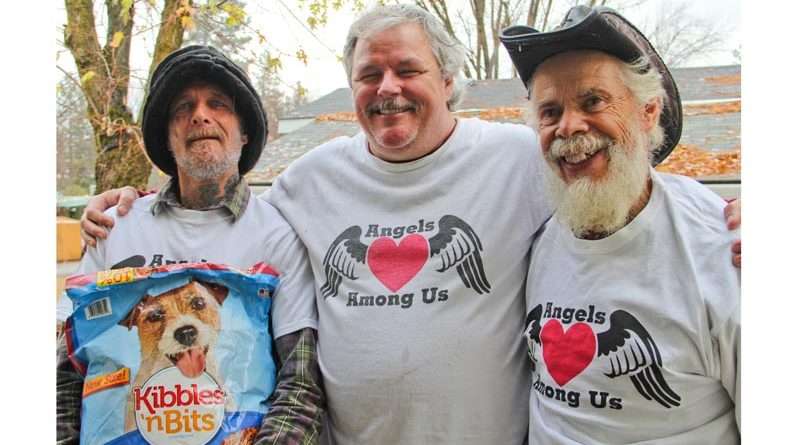 Volunteers from all over Plumas County and beyond, including Carl Nielsen, left, Randy Robinson and Herbie Beck make up informal networks of good Samaritans like the Quincy-based philanthropic organization Angels Among Us. Photo by Roni Java
News
December 14, 2018December 12, 2018 Roni Java, Staff Writer

In the behind-the-scenes world of good Samaritans, it’s not so much who you are as what you can do — and do quickly, locally, immediately that counts.

Just ask Quincy’s founder of the philanthropic organization Angels Among Us, a woman known to many simply as Julz.

“Please come in,” says a handmade sign on her front door, which opens to an improvised workstation maintained in her dining room.

Radio handsets sit lined up in a tidy row and color-coded index cards tacked onto a bulletin board match similar stacks neatly piled within reach around the room.

The cards are marked with essential information, notes and contacts and easily pass for a sophisticated system of key references. Smiling, Julz welcomes a stranger with a nod, reaches for a stack, pulls out the one she needs, and continues talking on her headset.

Seated around her table are three volunteers taking assignments and getting ready to leave on various long, merciful errands to aid victims of the Butte County Camp Fire.

Herbie Beck, Carl Nielsen and Randy Robinson — wearing Angels Among Us T-shirts and unusual in that they don’t mind sharing their last names — have come by because they have some time to devote to the relief mission.

And like any true mission, it takes an extensive contingent of willing folks to keep the engine of support rolling. Many, many of them are quietly and privately doing great good behind the scenes.

Angels Among Us wants to thank these people.

“We couldn’t do any of this without all these folks helping us,” Julz says aloud, fielding phone calls and typing away on a laptop with the expertise she has developed over years of managing logistics in her previous careers of working on emergency responses.

“Things are changing minute-to-minute, what people need and where they need it,” she adds, searching her databases and phone lists.

She issues quick instructions to Beck who will be driving today, by any open highways available, to deliver a load of everyday necessities to churches and specific charitable groups where Julz has lined up and confirmed that the goods are needed for Camp Fire aid and, importantly, that they will be accepted.

“We have driven about 4,000 miles since the Camp Fire broke out,” says Beck, who works for the county and happens to have some free time at the moment. “It takes us about eight hours to make each delivery trip to Redding. The drivers all have their own specific areas they cover. A local gas station in Quincy has donated fuel to us because we’re using our own vehicles.”

Beck adds that the Methodist Church donated $273 toward his vehicle expenses, saying, “Why do we do this? We do whatever we can because it’s from the heart and we are servants of God.”

Nielsen plays an acoustic guitar softly on the other side of the room as he waits his instructions.

Julz notes that donations of toiletries, paper towels and everything else imaginable keep showing up on her porch, gifts from people in Plumas County who want no thanks, only an opportunity to help.

Robinson’s health doesn’t allow him to do as much as he would like. Today, he’s fighting some discomfort, but he pulls up his chair and listens as Julz fields a contact from a distressed pet owner.

A lot of the help that this group coordinates centers on rescuing and reuniting pets with their owners now that the deadly fire is contained and out.

“He’s in a Marriott Hotel room with his two Rhodesian Ridgebacks,” Julz says, checking her screen and multi-tasking. “He’s trying to get back to Chico and he needs a place for his dogs for about six months. He CANNOT take them to another shelter; they were a wreck when he got them back during the fire. He’ll pay for anything for their care. Let him know we’ve got dog food covered from the Humane Society and we’ll find someone to take his dogs for him, it’s gonna be OK.”

Robinson was the one Julz sent when she desperately needed someone to meet a young mother and her small children in Nevada just after the fire took off. They had fled the flames and her children were desperately ill from the smoke.

“This man, he drove with 10 gallons of gas to meet her at Topaz Lake because I sent her down the valley on Highway 99 out of that toxic, soupy smoke and then the back way over around Yosemite into Nevada,” Julz said, tears welling in her eyes. “I know this girl, she’s like family. She had nothing left to get her to Plumas County where she does have people. We just had to get her here to safety. He drove all night to meet her and follow her back.”

By the time the young woman made it to Quincy, her car heater had stopped working. She and the children were painfully cold.

“My son, Anthony, brought her car to his auto shop and he completely fixed her heater, no charge,” Julz explained. “That kind of thing has been happening all over these mountains since the Camp Fire, the Carr Fire before that, and for many years.”

She said Angels Among Us was formed back in the 1990s initially to quietly and anonymously help a fellow who could never afford four good tires for his car all at once. Yet, the man was generous to a fault and would loan his car or his last dime to anyone he felt needed them more than he did.

“That was our first project,” Julz said with feeling. “We bought that man four good tires and it felt great.”

Now, Julz and her angels want to share that wonderful feeling by thanking key people who have been involved in the Camp Fire relief work being coordinated from her dining room command center.

What follows are the heartfelt words of appreciation from the Angels Among Us team.

There have been so many people and businesses that have stepped up in a big way from the very beginning of the fire, helping our communities to come together in this spectacular time of need.

Angels Among Us has been able to deliver collected donations to victims of the Camp Fire, but that would not have been possible without the generous contributions from so many in our small town communities.

We’d like to begin by thanking Miss Dorothy and Mr. Bob at DMF Kennels.

“If I had not had a safe place to secure my dogs during this time, we would not have been able to have such a large influx of people coming and going, delivering donations into my home,” Julz acknowledged.

Mr. Raj and Miss Nina of the Relay Station have provided fuel for all of the drivers working with Angels Among Us to deliver donations. They gave us over $1,000 in free fuel to make deliveries possible to places such as the North Valley Animal Disaster Group (NVADG) in Chico and Oroville; to fire victims at the Forest Avenue Wal-Mart parking lot camp; and the Salvation Army in Chico.

Pedro GTP Relief, a nonprofit in Redding has been collecting and distributing donations to victims of fires since the Carr Fire began. This organization has also brought donations to the Glenn County Fairgrounds in Orland and deliveries of donations to locals in our mountain community as they have returned home.

A generous benefactor who would like to remain anonymous purchased T-shirts and then had them printed for the Angels Among Us crew from Mr. Wayne at T’s2Go in Quincy.

We have many people from Quincy who are volunteering their time, vehicles, trailers and donations who were ready to leave at the drop of a hat just to get the donations where they have been needed, in a timely manner.

We also had a group from the Lodge Assisted Living and Memory Care Community located in Carson City. They delivered so many items in one truckload that it reminded us of one of those “clown cars” where they just keep coming and coming and coming and you have no idea how they could fit so much into such a small space!

Kerri Hoover of Round Table in Quincy donated free meals for people who had been working, sometimes, 18-hour shifts and could not find the time to cook for themselves.

Ed Cammack at Plumas Motor Supply donated a hitch and ball on quick notice when the correct size could not be located in time to get a load of donations to fire victims down the hill.

Ellie Rose deliverined a package to an EMT in a Chico shelter clinic. The emergency responder had used a secure Quincy address to have supplies sent to, in the beginning of the chaotic nightmare of the Camp Fire, and wasn’t sure where he would end up.

Acknowledgement also goes to the men and women who jumped on board with Angels Among Us as soon as the needs arose — people like Sarah Werstler of Quincy and Sara Pichette of Santa Cruz.

“While I have been using my logistics coordinating skills to pull all of this together, they have been ready and available at all hours of the day and night to go to where they were needed,” Julz said. “We even had a person ready to go pick up one little kitten from the NVADG facility in Oroville as an elderly woman was not going to be allowed into a shelter with her fur baby. In the end, they found a shelter that did accept both the lady and her pet, but our drivers were ready to go at midnight to rescue her kitten so it would not have to go into a packed shelter while being separated from the loving arms of its owner.”

Julz also noted that Angels Among Us volunteers are finding out where lost, rescued Camp Fire animals have been placed.

To help reunite people with their pets, volunteers are reaching out to NVADG and “seven pages worth of shelters, vets and citizens we have listed, as well as trying to find foster homes for owners who have reunited with their pets, until the fire victims can find more long-term, permanent housing for their pets.”

“As the days, weeks and months go on,” Julz reflected, “as long as we have the funding for fuel, we will continue to be here to help our family, friends and neighbors, delivering love, support and donations. Thank you for making this possible. Thank you everyone.”