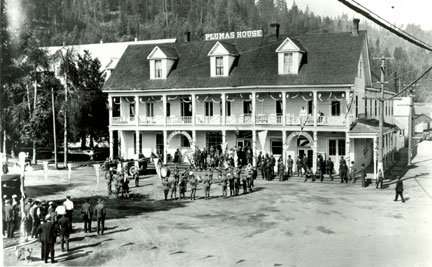 The traveling Chautauqua Band playing in front of the Plumas House as people look and listen c. 1919. The white building located to the left of the main hotel building was a separate annex added to the hotel in later years. Photos from the Plumas County Museum
News
December 1, 2016December 6, 2016 Staff

Where Dame Shirley Plaza stands today was once the site of three major hotels, all of which were the center of social life in Quincy, and all of which burned to the ground.

The last of these three hotels, the Hotel Quincy, was a speakeasy during Prohibition and its burning the subject of a trial where the owners of the Hotel Quincy were accused of setting fire to their own hotel.

The Plumas House Hotel served Quincy for 57 years, before finally burning down in 1923.

In 1925, the majestic Hotel Quincy was built to replace the Plumas House Hotel. At the time, our current county courthouse had been completed just six years earlier.

Across Main Street from the courthouse and the Hotel Quincy sat the much smaller Grand Central Hotel built in 1897. It too was to be the last of three hotels built on the site it occupied. It burned in 1934.

In 1925, when the Hotel Quincy was finished, downtown Quincy was where most of the action was. The two new buildings must have been quite a sight for tourists walking or riding over from the nearby train station.

The early Hotel Quincy reflected its times, the Roaring Twenties, with Ford Model Ts and other early automobiles lined up out front and jazz music playing inside the hotel.

During Prohibition, according to comments made by the now deceased Ernie Leonhardt which were published originally in this newspaper, some of the support posts holding up the restaurant portion of the hotel contained hidden compartments.

Leonhardt said patrons would let the restaurant know ahead of time what type of alcohol they wished to consume with their dinner. After they were shown to their table, patrons would open the nearest compartment to find bottles of alcohol stashed inside from which they could pour themselves drinks.

From 1925 to 1944, under Carl Hankel’s management, the Hotel Quincy bragged about having “the highest class accommodations in the Sierras,” with “hot and cold running water and steam heat in every room.” Later, when telephones in hotels were a novelty, the hotel claimed to have telephones in every room.

Hankel was known for creating a friendly atmosphere that made everyone feel at home. The hotel advertised the presence of “a comfy, homelike lounge and a spacious porch with ‘lazy’ chairs and rockers.”

At the end of World War II, as automobiles became more available, tourists began shifting from traveling by rail to traveling by automobile. Being more mobile, people didn’t have to sleep downtown to enjoy its pleasures.

The hotel passed through a number of owners and began to go steadily downhill.

On March 15, 1966, George and Helen Parell purchased the hotel. The couple had owned the hotel for less than nine months, when in the early hours of Sunday, Nov. 27, the hotel caught fire.

Firemen rushed inside and knocked down the doors of the rooms where quests were registered to be staying. However, they had only a few minutes before the hotel became an inferno. Fortunately it turned out that no one was in the hotel.

Scott Lawson, the director of the Plumas County Museum, was 9 years old at the time of the fire. His family home was close to the hotel.

Little Scott woke up in his bed at 4 a.m. amazed to find his room aglow in a brilliant orange light. Like most young boys would, Scott wanted to run downstairs to watch the fire, but his dad stopped him.

As it turned out, approximately 400 people turned out on Main Street to watch the hotel burn.

By 10 a.m., the fire was out. The outer walls of the hotel were bulldozed in order to keep children from getting hurt by climbing on them. The ruins of the hotel smoldered for days.

Suspicions were raised almost immediately that the owners had set the fire.

For one thing, the hotel had been closed early on Saturday evening just after the last of the hotel guests had been escorted outside. The hotel was then locked up tight.

That, along with the characteristics of the fire and other evidence, convinced the Quincy Fire Department, the Plumas County Sheriff’s Office and the National Board of Fire Underwriters that the fire had been set.

Three months later, George Parell and Owen Teagardin, a former bartender, were arrested for arson. George’s wife Helen was also sought for questioning, but she could not be found. She apparently ran off to Canada and was never heard from again.

At the trial, 19 witnesses testified that the fire was intentionally set. However, the judge, Bertram D. Janes, felt that, although he strongly suspected that Parell and Teagardin had started the fire, there wasn’t quite enough evidence to find them guilty.

Andy Anderson and Stanley Young were chief of the Quincy Fire Department and district attorney, respectively, at the time of the fire. Both men felt very strongly, even 35 years after the fire, that the Parcels and Teagardin were guilty of burning down the Hotel Quincy.

Anderson said in 1991, “I’m as resolute today as I was then that that fire was not an accident, court findings not withstanding.”

After the fire, the site of the Hotel Quincy and the two earlier hotels remained vacant for 35 years.

In time it was decided that the lot should be turned into a park.

In 1999, a public contest was held to name the future park and Dame Shirley Plaza was the name chosen.

This name was selected to honor Dame Shirley who wrote letters to her sister back East describing her experiences during the early years of the gold rush at Rich Bar. Rich Bar is located along Highway 70 downstream from Quincy along the Feather River Canyon.

In the following two years, Quincy volunteers removed debris from the site and planted grass donated by the folks from the High Sierra Music Festival.

These volunteers, along with the county, turned a vacant lot into the beautiful public space we enjoy today.