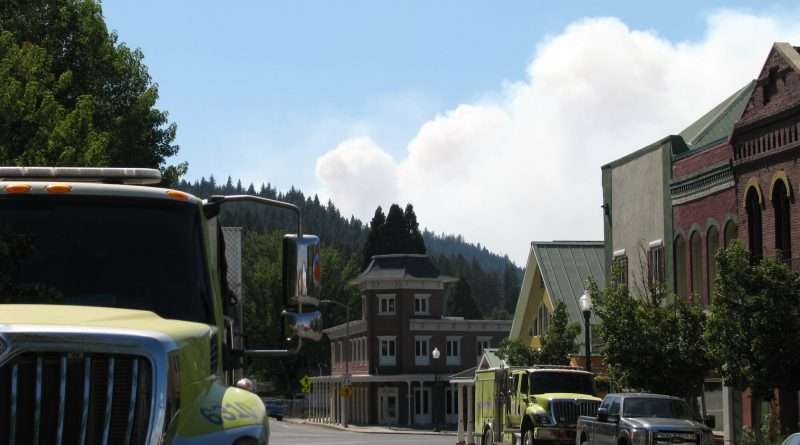 Common sights in downtown Quincy — fire trucks and smoke. The Dixie Fire continues to put off heat near Meadow Valley, which is why that area remains under mandatory evacuation. Photo by Scott Corey
News
August 1, 2021August 2, 2021 Editor

What a difference one week makes. Last weekend Plumas News was kept busy posting evacuation orders and warnings, and today, a lot of those orders and warnings were either removed or lessened. While there are still some hotspots — most notably Meadow Valley and the Rush Creek Road area in the Feather River Canyon, the perimeter is holding well even though it was tested by winds today.

This evening the Dixie Fire stands at 248,570 acres and is 33 percent contained. There are currently 5,463 personnel assigned to the fire, reflecting another slight drop.

Operations Section Chief Mike Wink reported that there was essentially no change in his report from what he has presented for the past couple of days, though with the clearer weather, helicopters were able to be utilized today.

Operations Section Chief John Goss said that for the first time in at least 4 or 5 days, there was  blue sky in Quincy, but that meant increased fire activity. One of the larger columns of smoke that manifested today was attributed to a  pocket of unburned fuel in the Rush Creek area. He said that last night crews were able to protect structures that were threatened.

Moving over to Crescent Mills and Taylorsville, the fire threw a spot over Round Valley Reservoir that landed in a pile of chipped mulch, but crews were able to get on it quickly. Goss said that all of the firing operations, with the exception of Meadow Valley, have been successfully completed. The rest of the perimeter lines continue to hold.

As for the Evans Fire, which is burning in the Moonlight scar, crews have line around it. It’s currently  95 acres and 10 percent contained. Firefighters were able to use aircraft on it today.

Incident Meterologist Ryan Walburn said that the area is in a pretty seasonable weather pattern — warm and dry with a prevailing wind out of the southwest, with gently nightly northeasterly winds. However a weather change is expected by Wednesday, bringing increasing southwest winds and more fire volatility.

Sheriff Todd Johns read the list of changes to evacuation orders and warnings that he made at noon today. (They are included below.) He described it as “bittersweet” because he was hoping to open more areas, but there is still active fire in some areas, and infrastructure repairs that must be made in others.

Incident Commander Chief Chris Waters said that the entire fire has to be lined, plumbed and mopped up before fire personnel can leave. “Some of the smoke production has dropped off, but we are still getting columns,” he said. “While we are feeling a little better than we were a week or two ago, we still have some challenges.”

PNF Fire planner Marty Senter also looked toward the future. He said that he grew up in Quincy and has a  vested interest in the recovery of this community and of this county. He looks to  short-term recovery (getting people back in their homes) and long-term recovery, which includes building and repair. There are homes to rebuild; utilities to repair; and the forest to restore.

“It’s extremely dry, this is the driest we have ever seen it,” he said and there is a lot of time left in fire season — two months of heavy firefighting. “We all need to make smart choices,” he said of people working and recreating in the area. “We can’t afford to have another one of these catastrophic events.”

Senter  addressed fuels reduction work that has been done in the area, and the success firefighters experience when the fire enters, or spots into, one of these zones. He said he has heard that people think the Forest Service should do more of  this work, but he said it depends on funding and staffing. He encouraged residents to contact their congressional representatives and ask them to seek more funding for such work. 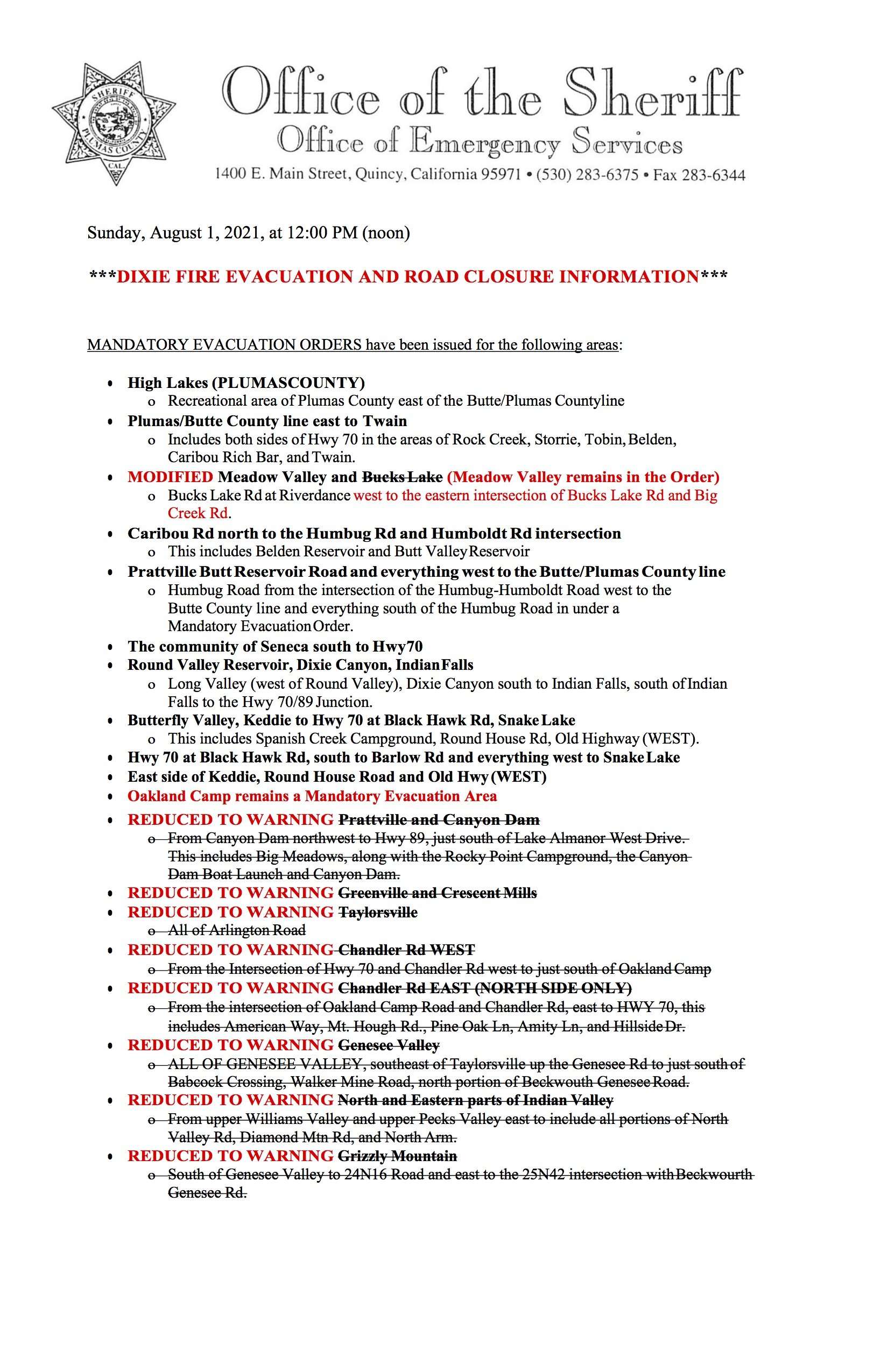 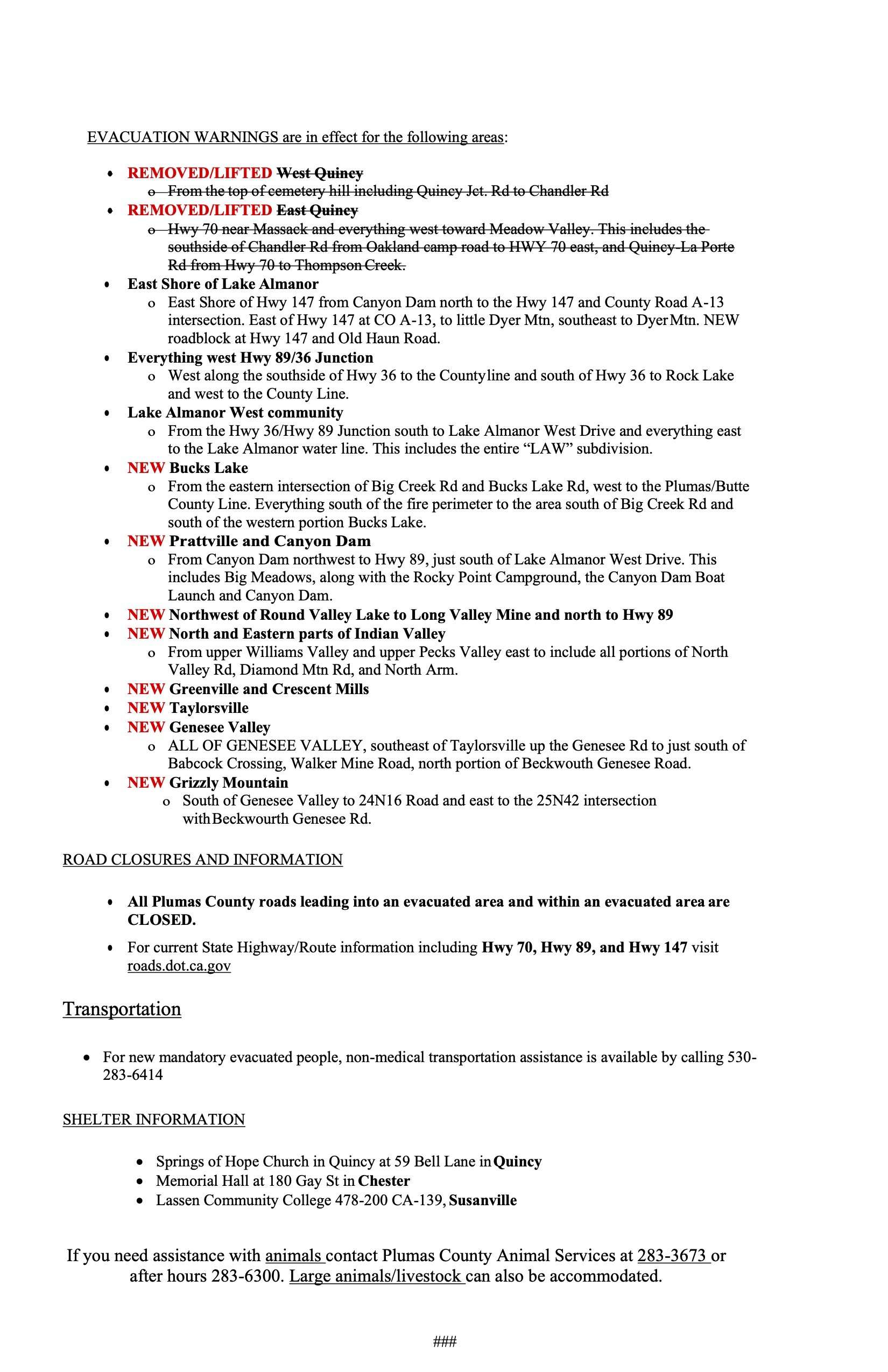