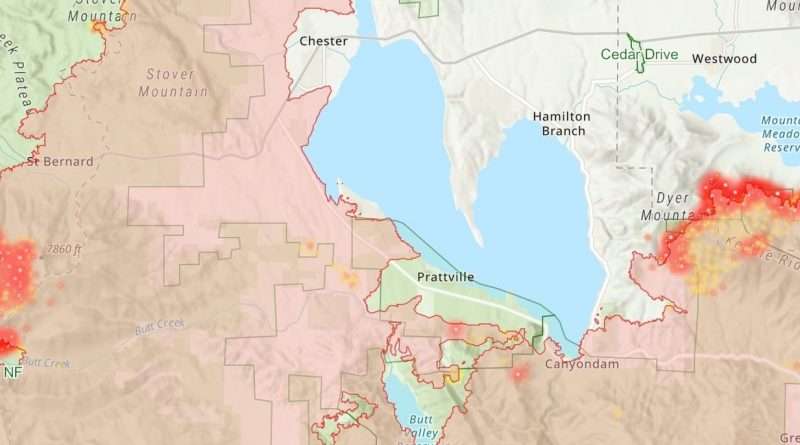 As of this morning, Aug. 12, the Dixie Fire is at 510,227 acres and remains 30 percent contained. There are 1,109 structures destroyed (though this number is certain to increase) and 14,416 structures are threatened.

During his morning briefing, Operations Section Chief Mark Brunton said the Butte Sector is in heavy mopup. The Butte sector contains the origin of the fire and most of the activity in Butte County.

Moving up to the area on the left flank, crews are trying to keep it from spreading west into Tehama County. The plan was executed efficiently and effectively, and mopup continues.

Heavy mopup is also continuing on the west side of Lake Almanor. Brunton said the area is not quite ready to let people back in, but getting close. Officials need to make sure it is safe from hazards and ensure that services are available.

On the east side of the lake, a lot of structure prep has been completed. A successful firing operation was completed on A21, to contain the fire.

West Zone crews are working with the East Zone to protect Clear Creek and Westwood, as well as the community of Janesville.

In other news, the west zone firefighters are also working with Lassen Volcanic National Park and the Highway 44 corridor is a priority with no fire threat at this time.

Brunton said two helibases have been established and they fly aircraft as the air clears. However today there will be a change in the weather, with the fear of fire spread and new starts. The management team has identified surge resources to respond wherever they are needed.

“We are well prepared and have contingency plans in place,” Brunton said adding that there has been a lot of success since Team 3 has taken over the West Zone.

According to Operations Section Chief Jake Cagle, everything is holding well along the southern perimeter of the fire and is doing so well that some resources have been moved out and are being assigned to other areas of the fire.

Up by Indian Valley and Crescent Mills, mopup continues. Up to Keddie Point and North Arm the fire continues to back down to North Arm, but structure prep has been completed. Firefighters will go direct on the fire as opportunities allow.

As for the Lights Creek and Diamond Mountain areas, there is structure loss, but to what extent is not yet known.

Fire continued to spread to China Gulch and into Wilcox Valley. Crews are continuing to work in the area and provide structure preparation. Of concern for today is the predicted thunderstorms and erratic winds.

Working on contingency lines and direct line. A fuel break is being built to help protect Janesville.

Everything around Lone Rock and into the Sheep Fire scar continues to hold.

Work continues in the Highway 36 area with the West Zone, where crews are going direct where possible but also building contingency lines.

Over in the Dyer Mountain area, the west end is locked in and crews are going direct in places.