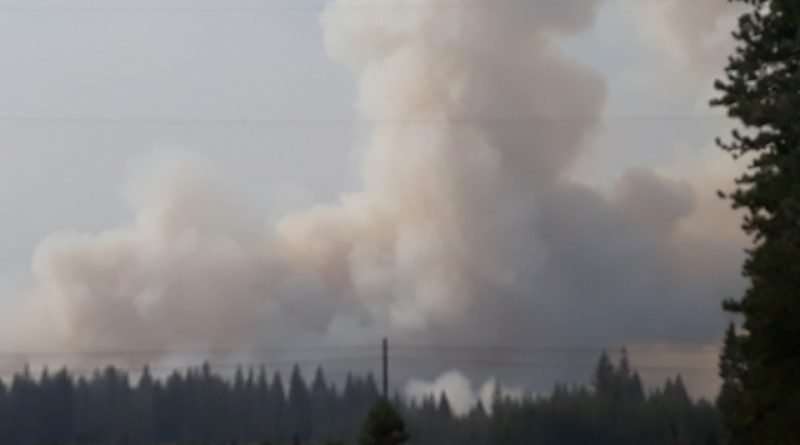 The weather continues to impact the fire’s growth, which forced multiple evacuation orders in Lassen County yesterday. Over 28,000 have been evacuated in the Plumas, Butte, Lassen and Tehama counties.

Weather will continue to play a critical factor today as the entire fire is under a Red Flag Warning. Winds are expected to pick up late this morning and continue through tonight. Southwest winds with gusts up to 40 mph are expected on the mountaintops until they change to first a northwest flow and then a northeast flow, which will continue into the day on Wednesday. It won’t be quite as hot, but it will be quite dry.

The Morgan Fire, which is west of the Dixie, grew yesterday and is progressing toward the national park. It’s reported to be roughly 10,000 acres and could merge with the Dixie. Operations Section Chief Mark Brunton said progression into the park is preferable to advancement into Tehama County, because the fire will be easier to fight in the park.

There was also an increase in activity in the Warner Valley area, though, the fire did not reach Highway 44 yesterday. There was a lot of activity north of Chester and Westwood, but it was within the burn perimeter. There was some short range spotting, but they were all quickly contained.

As of this morning there was no fire in the Westwood, Clear Creek, Peninsula or Hamilton Branch.

The trajectory of the fire is pushing it toward Janesville and Susanville.

Last night there was a push to evacuate Plumas County residents out of the Lassen County evacuation center to a Portola center, but that effort was thwarted when Highway 395 closed.

Operations Section Chief Chad Cook gave his first morning update since the management teams have officially transitioned today. He began by saying that the new team understands the impacts that have taken place on the communities.

He reported that from the origin of the fire at the base of the Feather River Canyon, all the way up through Quincy – there has been no movement of the fire line. There are crews working the area, but primarily to ensure that there are no hotspots. That’s contrasted to moving up into Taylorsville and Indian Valley, where there is still heat on the fire.

The more intense activity is moving up the Beardsley Grade, up to Taylor Lake and Antelope Lake, which continues to pose a problem. Firefighters are trying to drive it into the Walker Fire scar.

Cook said that fie did push out toward Janesville and Susanville, and the East Zone is working with the West Zone to protect those communities.