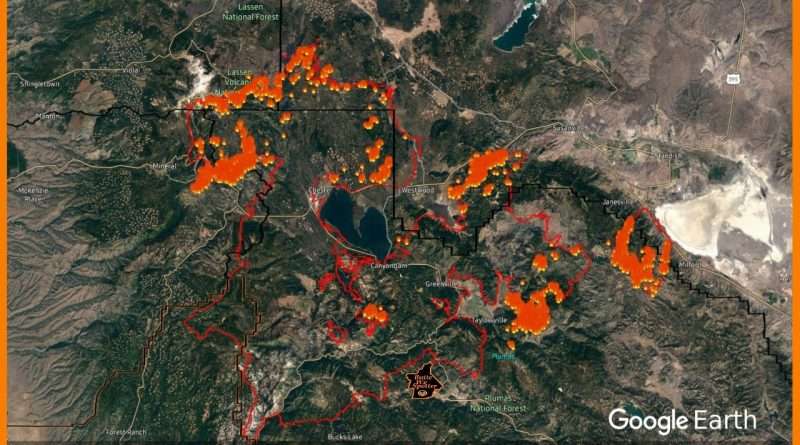 The problem areas continue to be Fredonyer Pass, Janesville, Indian Valley (particularly Genesee and Taylorsville), and the far west portion of the fire threatening more of Tehama County.

Operations Section Chief Chad Cook presented the morning update, beginning with the area near Janesville where a lot of emphasis has been placed in recent days. His counterpart on the West Zone, Mark Brunton also addressed Janesville since the two zones are working on this area together. He said that Janesville proper is looking very good; they are seeing some slopovers, but picking them up. Planes are dropping a lot of retardant to assist the crews. They hope to keep the fire from advancing in to Milford and they were able to protect a lot of homes along Highway 395.

Below Antelope Lake, the fire is burning in the Walker fire scar, which is a very dangerous area, because of the terrain and the abundance of dead trees. The fire is cleaning out old fuels, and it’s hoped that it will eventually go out when it runs out of fuel. Rather than assign crews to that portion of the fire, management is focusing resources on Genesee. Crews have prepped all of the structures and are allowing the fire to back down the hillside, burning out undergrowth, but sparing trees.

Yesterday, that portion of the fire threw a spot across the valley, which landed a couple of miles away in very steep, inaccessible terrain. Cook said that aircraft were able to drop retardant on it and it remains in its footprint. Crews are also working on dozer lanes to box it in to keep it from threatening East Quincy. “Wind should take it back into itself today,” Cook said.

There is still some interior heat in Indian Valley that crews are monitoring.

Antelope Lake and Wilcox Valley look pretty good and it’s in more of a patrol status there.

The southerly part of the fire continues to look good.

Operations Section Chief Mark Brunton delivered the morning update, saying that it remains very quiet in the Butte Sector (the southwest portion of the fire).

As repopulation continues in the Lake Almanor Basin, Brunton said there have been no issues and crews respond to reports of smoke as they come in. He said that the Highway 36 firing operation is holding the fire from coming down from the north.

Crews have been successful around the Dyer Mountain area, but there was one slopoover yesterday that grew to about 20 acres before crews contained it. Small fires continue to pop up here and there, he said.

Crews have also gone direct around the part of the fire pushing toward Susanville, protecting that community.

In the Lassen Sector of the West Zone, crews were able to get lines around the fire to seal off the western edge to protect Tehama County. They also used aircraft on this area of the fire to support the efforts of firefighters.

Overall looking good, have a lot of success and the weather is looking favorable, Brunton summed up.