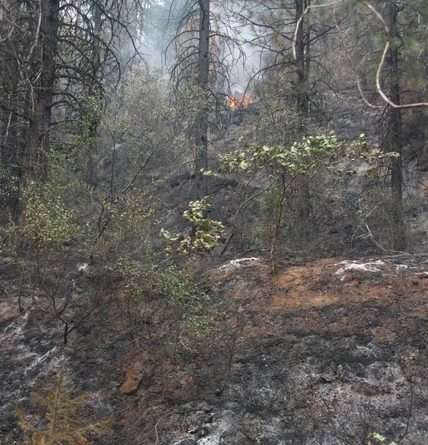 Highway 70 east of Quincy has active fire on both sides of the road. This is a stump burning on the north side amid the ash of other burnt vegetation. Photo by Will Farris
News
August 25, 2020August 26, 2020 Editor

According to tonight’s update on inciweb: Crews reinforced dozer lines on the north side of the fire below Quincy enough to consider a portion of that line contained. The fire did not move much on the southeast side near Spring Garden, east of Hwy 70. Crews there were prepped to knock down spots if winds picked up and had some activity but were able to hold the fire in place. Crews were also active building dozer and hand line in and near Greenhorn and Spring Garden to protect residences there in the event of a fire breakover. Tonight, crews will continue to reinforce gains made throughout the day due to favorable weather conditions and increase crew capacity.

UPDATE 10:10 a.m.: During an update with the Board of Supervisors at 10 this morning, Sheriff Todd Johns announced that East Quincy residents could return home, though they remain under an advisory. It is still too dangerous for La Porte Road residents to return due to dangerous trees. As for Greenhorn residents, Johns said good progress was made on efforts to protect Greenhorn and they “may be able to get folks back into Greenhorn” soon. He said that last night, the fire came within approximately 1.7 miles from residences in Spring Garden so those evacuations remain in effect.

UPDATE 10 a.m.: East Quincy residents may return home, but they will be under an advisory evacuation.

This morning at 10 a.m. Sheriff Todd Johns will announce his plans for East Quincy residents. La Porte Road will remain under mandatory evacuation. Highway 70 remains open under CHP escort, but that could change at any time.

During this morning’s briefing at the fairgrounds, the incident command team said that the most challenging portion of the fire is its push to the east. It is now within one-half mile of Highway 70. “That is our area of concern today,” an official said. “We are working to protect the communities and keep the fire from going toward the north.”

Spotting continues to be a problem on the Claremont Fire, and Pat Boyle, whose job it is to report on fire behavior said there has been increased activity with spotting. “The fire wants to go to the northeast,” he said, pointing to the area behind Spring Garden and Sloat on the map.

Today’s priorities continue to be “structures and people.”  “We’ve got to secure these communities,” said Chris Childress, one of the morning’s presenters.

Chris Carlton, the Plumas National Forest Supervisor, reminded those gathered for the 7 a.m. briefing that “while we’re here we’re working for the people of the community.” He knows the stress that they are under, estimating that 2,000 people have been evacuated in the area. That’s pretty close to the number that Plumas County Assessor Chuck Leonhardt arrived at after looking at the areas evacuated and incorporating data from the 2010 census.