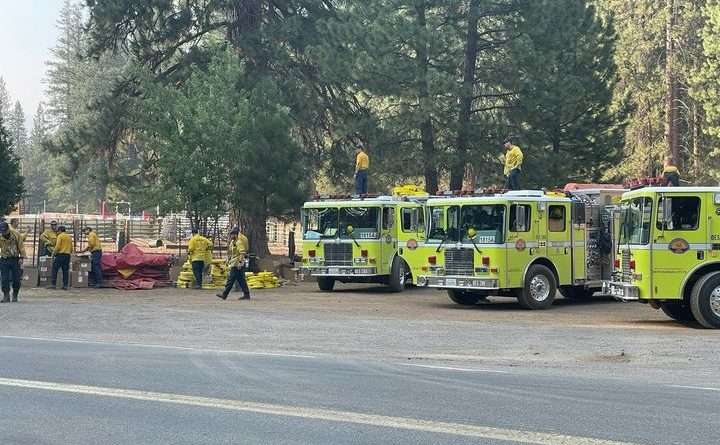 Ready and waiting for the firefight to protect homes in the Taylorsville area. Local and out-of-area firefighters prepped the structures as the fire approaches. Photo courtesy of USFS
News
August 25, 2021August 26, 2021 Editor

It’s four months to Christmas, but we would gladly exchange all gifts under the tree for an end to the Dixie Fire. As of this morning it has burned 735,064 acres and is 45 percent contained. The increased containment is a bit of a gift, but we want all communities to be safe and that is not the case today.

A fire fight continues to wage to protect Taylorsville and residents in the greater Quincy area and along the Highway 70 corridor watch anxiously as the blaze continues to grow in the East Zone and two new spot fires merged with the original spot on Grizzly Ridge. On the West Zone, activity is calming down on the perimeter — except for the northeast portion — but internal smokes are still fraying nerves.

On the east end of the fire there was a small slop-over between the road and Antelope Lake that firefighters were able to catch and line.

Between Antelope Lake and Genesee Valley the fire continues to back down the slope toward the road. Yesterday dozers and crews worked at trying to stop southward progression by the Walker slop-over and were supported by aviation assets. They will continue line construction east today.

Late in the day the Grizzly fire produced two spot fires to the east between the Walker slop-over and the Grizzly spot and these were visible from Quincy. Overnight they grew together and are estimated to be around 500 acres in size and are connected to the the main spot. Today crews and aircraft will continue to work at in keeping the Grizzly spot from moving south and heavy machinery will work on indirect control lines down Grizzly Ridge.

An extensive plumbing operation was carried out in Taylorsville and hose lines and water have now been run to every house in the community.

In Peters Creek work continued to improve and strengthen lines and mop-up. Structure preparation continues in the Five Bears and Ward Creek area.

Firefighters continued to conduct heavy mop-up activity in the Dyer Mountain area to secure the line.

An East Zone community meeting is scheduled for tonight at 7 p.m.

Mop up and strengthening containment lines continue in the Janesville/Milford areas, and the areas have been repopulated.

Ditto for the Westwood section of the West Zone, which includes the Lake Almanor Basin, Westwood and toward Susanville. “It is looking really good,” Operations Section Chief Mark Brunton said last night. Though not a threat to containment lines, Brunton said crews are receiving continuous calls from people seeing smoke, which are internal. It’s expected that these smokes could last for many months.

Moving north of 36 into the Lassen Sector, crews are putting in dozer and hand lines and “it’s just going to be a work in progress.”

Fire continues to burn in the national park, but it hasn’t burned north out of the park.

Incident Commander Billy See said that over 5,000 personnel remain on the fire, though some resources have been reallocated to the Caldor Fire, which is closing in on the Lake Tahoe Basin, and is currently the number one priority in the nation. “We will retain resources to keep the perimeter under control,” he said of the Dixie Fire.