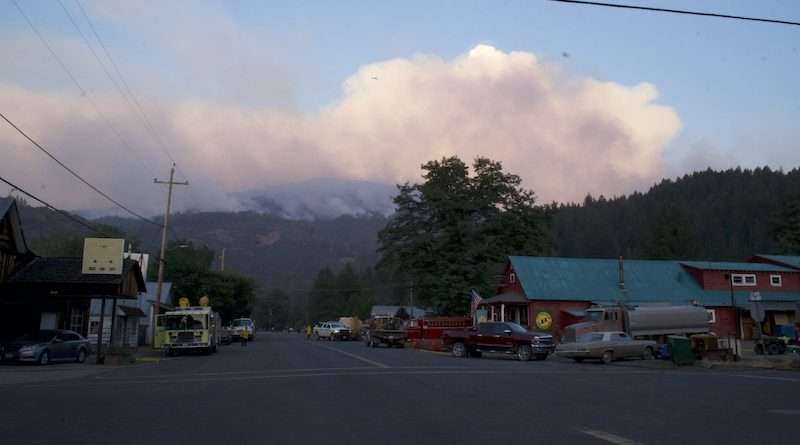 The town of Taylorsville has withstood fire from a a number of fronts, but it's not in the clear yet. Photo by Spanish Peak Productions
News
August 28, 2021August 30, 2021 Editor

The community of Taylorsville is the biggest concern on the massive Dixie Fire today.  Fortunately, there was minimal fire spread towards town over the past 24 hours.  Fire has threatened the community from multiple directions already.  So far firefighters have successfully protected the town each time the fire has come close.

There is only one avenue of approach toward Taylorsville left for the fire and that is from the Grizzly spot fire.

The Grizzly spot fire started several days ago when embers from fire burning on the north side of Genesee were carried across the valley and ignited a small spot fire on the steep slopes of Grizzly Peak.  The extremely steep slope and pockets of heavy dead fuels — the product of past avalanches — challenged firefighters.  They were able to slow, but not stop the growth of the spot fire.

The Grizzly spot fire presents two different and significant challenges.  As the fire burns to the north and west, it burns the one remaining unburned section of forest on the edge of Taylorsville.  Firefighters are well prepared for this with dozer lines and an extensive network of fire-hoses reaching every home in the community of 200.  In the last 24 hours there has been minimal fire movement in this direction.

The other challenge of the Grizzly spot fire is spread to the south and east.  Grizzly Ridge is a very large ridge running from the south side of Genesee to the north of Lake Davis. The Highway 70 corridor, from Quincy to Graeagle lies to the south of the ridge.  The fire would have to cross the ridge to threaten these communities.  If the spot fire continues to burn to the east, even without crossing the ridge, Lake Davis, approximately 7 miles away, and eventually the town of Portola would be threatened.

Protecting these communities is the huge challenge facing firefighters on the Dixie Fire and it will continue to be a challenge for many days.

The Grizzly spot fire merged with a second spot fire on Peel Ridge, also on the south side of Genesee Valley.  Over night, this fire merged with a third spot fire south of Genesee Valley near the Flournoy Bridge.  These three spot fires, now connected, present a large and formidable fire front burning in challenging terrain.  Operations Chief Chad Cook has been very clear during his briefings that firefighters recognize the daunting challenge this fire front presents and are doing everything possible to combat it.

The objective for firefighters battling this fire front is to keep the fire north of Grizzly Ridge and eventually cut off the eastward spread and push the fire back into the Walker Fire scar.  Firefighters have been working towards this objective for several days by building a network of large fire lines supported by hose lays, heavy equipment, and when visibility allows, air support.

Firefighters have a very good chance of success as long as the weather cooperates.

The fire line on the north side of Genesee Valley is contained as is the fire line north of Milford.  In and to the north of Lassen Park, the satellite heat detection maps show plenty of active fire, but minimal spread.  This area has the largest portion of un-contained fire line, but fire officials have expressed confidence that they can prevent this portion of the fire from spreading further north and west where it could threaten Old Station and Hat Creek.

Elsewhere crews continue to mop-up hot spots and patrol communities.  Today there will be a large presence of fire crews near Milford and Janesville, throughout the Almanor Basin, Indian Valley and Westwood and most of all, Taylorsville.  Tactical patrols continue in Bucks Lake, Meadow Valley, Mineral and Mill Creek.

Smoke over the fire will keep fire activity low and aircraft grounded through early afternoon.  Winds generally less than 10 mph will blow from the east.  As the afternoon progresses, winds will shift to the southwest and get a little stronger. This is likely to reduce the smoke, increase fire activity, and allow for aircraft operations. Winds will continue to increase through Monday.  Relative humidity remains very low.

What is the difference between a contained fire and a controlled fire?

Firefighters have different ways to describe the status of a wildfire.  A fire is contained when a fuel break around the fire has been completed. This break may include natural barriers or manually and/or mechanically constructed line.  Firefighters will not consider the line “completed” until are reasonably sure the line will hold.  Containment is often expressed as a percentage of the contained line as compared to the entire fire perimeter.

A fire is not considered controlled until it is extinguished.  This usually means no smoking material has been observed for at least 24 hours.  On large fires, there may still be some smoldering and occasional flare-ups from the interior of the fire far away from and posing no threat to containment lines.