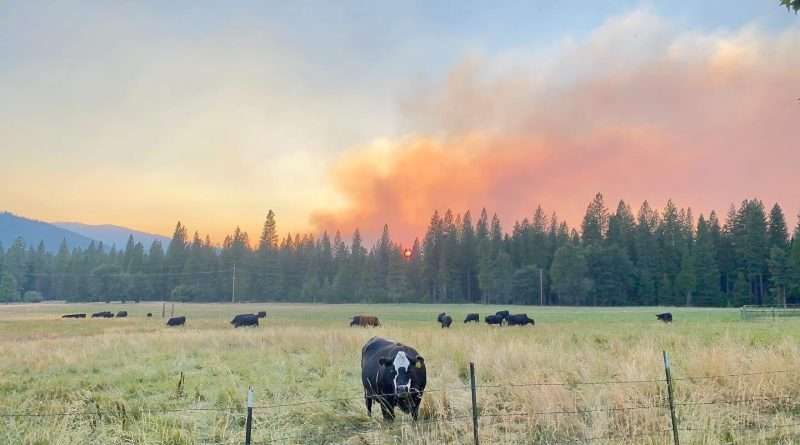 The view of the Claremont fire from the Kinship Ranch, an event venues, in Cromberg. Photo by Kinship Ranch
News
August 28, 2020August 29, 2020 Editor

UPDATE 8:45 p.m.: From the air and ground, crews continue to work on the fire that slopped over the perimeter this afternoon. Fire activity and increased smoke were very visible. Crews are nearing completion on a dozer line along the western edge of the fire and have hose lay in place near Claremont Trail, but the priority remains to the east where the communities of Spring Garden and Greenhorn remain under mandatory evacuation and Cromber  and Sloat are under advisory status, meaning they should be prepared should the order come to evacuate.

UPDATE 5:45 p.m.: Forest Service is reporting that fire activity picked up this afternoon and residents might see increased smoke. Firefighters are working on a part of the fire that slopped over the perimeter in the southeast region of the fire.

UPDATE NOON: As firefighters continue to work along the Highway 70 corridor, area residents may see some additional smoke rising from backfires being set in the area of Spring Garden. “We are coordinating some strategic backburning,” said a Forest Service spokesman. This will cause more smoke not only in the vicinity but it could blow toward the Graeagle/Portola areas with the projected wind directions.

Fire personnel are being shifted to the Bear Fire as crews gain more containment on the Claremont Fire.

As a result of progress on the Claremont, the Sheriff has issued some changes to his advisories. Areas that have been removed from evacuation advisory notices include East Quincy and Chandler Road. (See notice below for details.)

UPDATE 9 a.m.:  Taken from this morning’s briefing: Crews are nearing completion on dozer line along the western edge of the Claremont Fire and have hose lays in place near Claremont Trail, but the priority sections remain to the east. Crews implemented strategic firing operations above Estray Creek to help close the gap between the fire and Highway 70. Yesterday’s wind shift tested lines near Nelson Lookout and 23N10 roads and caused spot fires that firefighters were able to pick up and get lines around. Securing these areas today remains a top priority.

For the second day in a row, good weather and the diligent work of firefighters helped stem the growth of the fire and bolster containment lines yesterday. While we await the latest information from the night shift, it can be reported that the containment line behind East Quincy to Highway 70 is secure, and the spot fire that jumped the highway four days ago is lined with hose lay and also looks good.

Dozer line is being secured on the west end of the fire and there is an attempt to tie it in with line being laid for the Bear Fire, all in an effort to protect Quincy.

The most activity continues to be along the Highway 70 corridor. Spring Garden and Greenhorn remain under mandatory evacuation with advisories in place for Sloat and Cromberg. (The full list of evacuations and advisories is listed below.)

The Forest Service confirmed that a firefighter was injured while working on a fireline Wednesday afternoon. He was extracted from the site and air lifted out for treatment. Due to patient privacy rules, no further information can be shared.

To date no homes have been lost to the fire, though one outbuilding burned on La Porte Road. Most of the road’s residents were allowed to return to their homes yesterday, but the road is closed to non residents due to the threat of damaged trees falling on the roadway.

Highway 70 remains open, but residents are advised to drive with caution through the area and be mindful of their speed. It is recommended the roadway be used for essential travel only.

The Claremont Fire broke out Aug. 17 as the result of a lightning strike. It has threatened the communities of East Quincy, La Porte Road, the Highway 70 corridor, Spring Garden, Greenhorn, Cromberg and Sloat. It is part of the North Complex of fires burning on the Plumas National Forest. 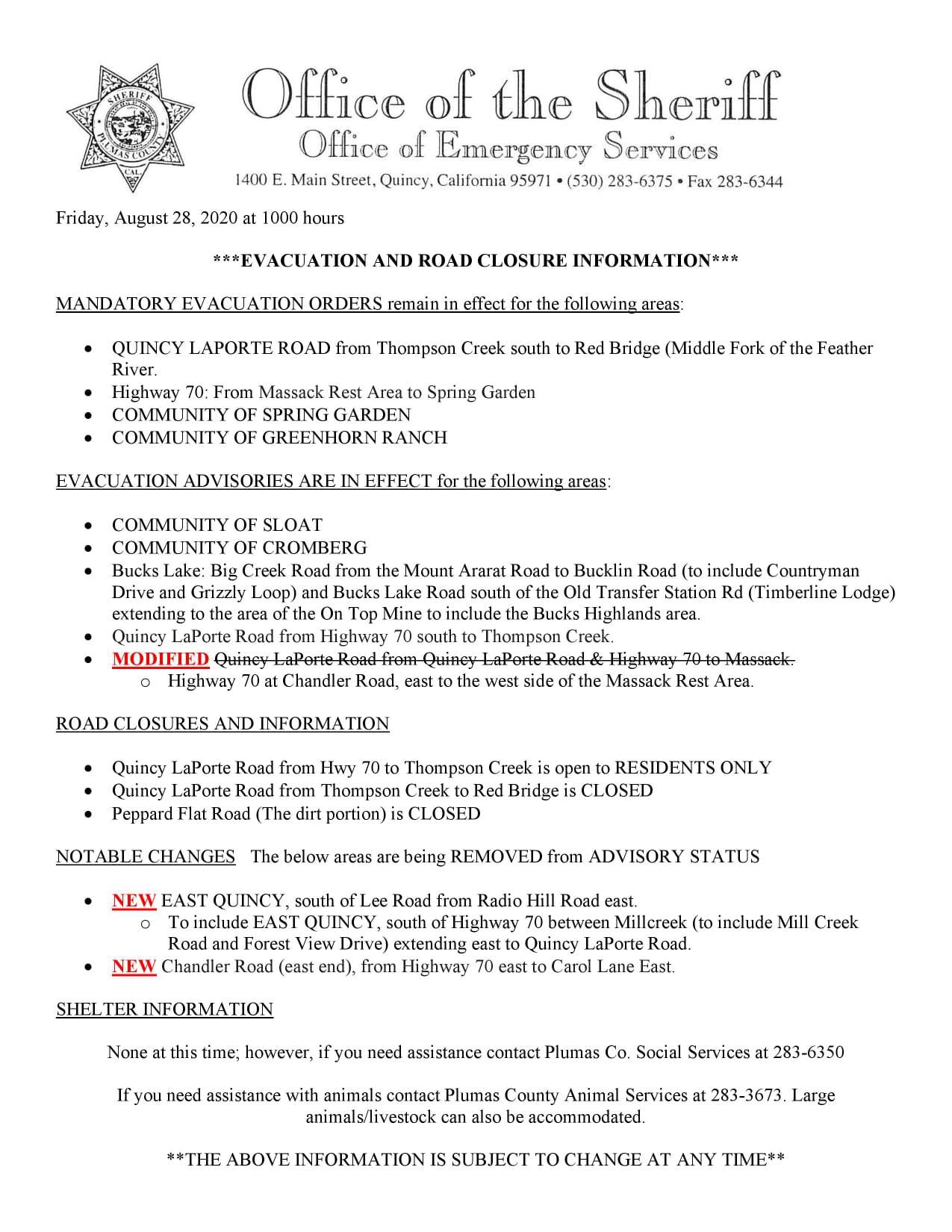 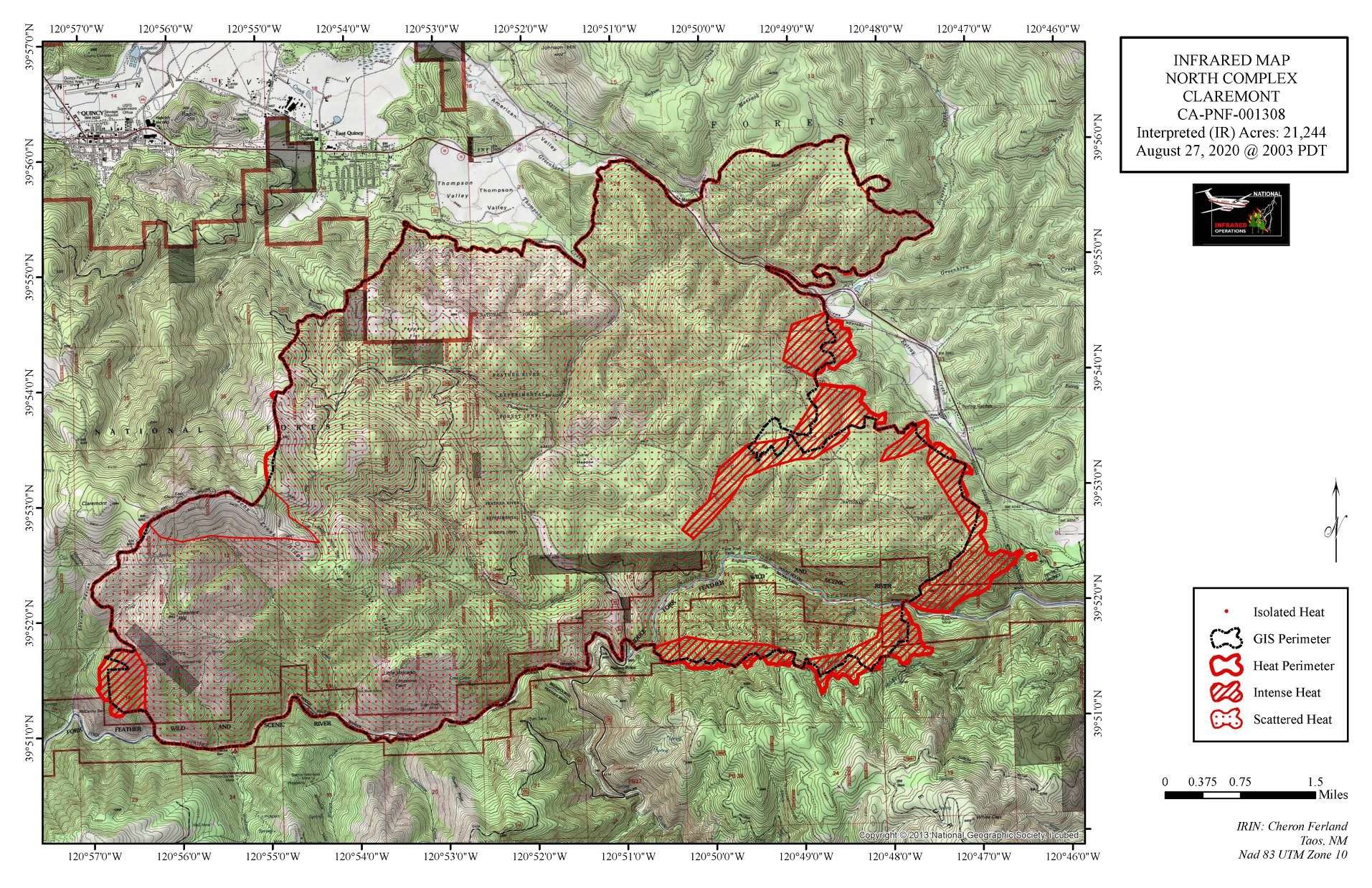