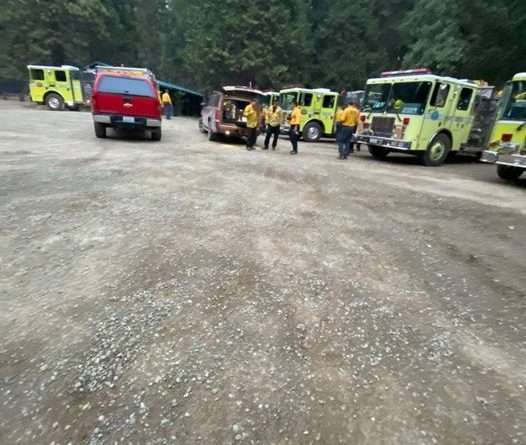 Firefighters are preparing for increased fire activity and possible extreme fire behavior over the next two to three days.  Wind speed will begin increasing later this morning with winds gusts out of the southwest at 25 mph expected by this afternoon.

Critically low fuel moisture and continuing low relative humidity, along with higher wind speed, could produce fire behavior similar to that which resulted in major fire runs near Chester and Greenville a couple weeks ago according to the West Zone Fire Behavior Analyst.

Fire crews should get better air support as the winds help to improve the visibility earlier in the day.  That is a mixed blessing at best because those are the same winds that will increase fire intensity and contribute to more spotting and longer spotting distances.

Fire crews will be in a race against time this morning as they work to improve fire lines and mop up the fire perimeter before the winds increase.

The wind will be blowing mostly from the southwest to the northeast.  This poses the most risk to areas along the northern and eastern areas of the fire, mainly in Lassen County.  As a result there will be increased staffing in those areas today, including the Highway 395 corridor where winds can be especially strong.  There is a large contingent of fire engines and other resources staged in Susanville ready to respond to any problem areas.

The winds should actually help to keep the fire away from the Highway 70 corridor for the most part.  Local channeling of the winds by terrain features could alter the direction of spread in some areas, especially further spread north of Grizzly Ridge toward Lake Davis.

Fire managers expressed little doubt that the Grizzly/Walker spot fire will be very active later this afternoon and will possibly become intense enough to become a plume dominated fire.  That is significant because the direction of spread from a plume dominated fire is much harder to predict.

Fire managers have deployed a large contingent of fire crews and equipment to the area. Structure protection efforts have also increased in the area.  The Greenhorn Creek Fire Department notified residents yesterday evening that strike teams of engines had been deployed to the community and would be working through the night to assess structure protection needs at individual residences.

The Dixie Fire size is reported to be 764,135 acres.  That is an increase of more than 7,000 acres in the last 24 hours.  Nearly all of that growth has resulted from the Grizzly/Walker spot fire.  Containment is holding at 48 percent.

Mopping up and what it means

Firefighters spend much time and energy “mopping up” a fire.  The entire perimeter of a fire must be “mopped up” before the fire can be considered controlled.

What does it mean to “mop up”?

Consider how a conscientious camper puts out their campfire.  They pour water on it.  But they do not stop there.  They stir the water into the hot ashes.  They break up any large smoldering pieces of wood so they can cool down.  They spread the ashes out to remove pockets of heat.  Then they put more water on it and start the process over again.  They keep at it until there is no more heat, using the back of their hand to check for heat.

That is pretty much it.  Except a wildfire is much bigger than a campfire, much bigger.

Firefighters normally mop up the perimeter of a very large fire; 200 to 300 feet in from the edge is common, but the depth may be more or less depending on conditions.  That is 200 to 300 feet in for a distance of hundreds of miles in the case of the Dixie Fire.  It is hot and dirty work; as strenuous as it is monotonous.