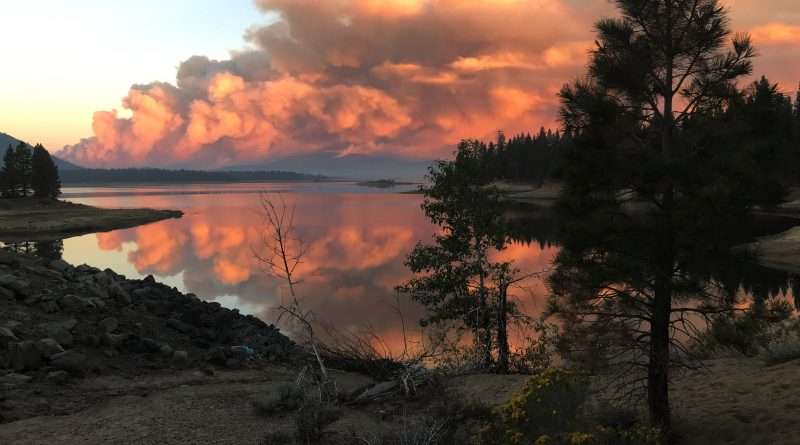 The Dixie Fire as seen from the Lake Davis Dam at 6:30 a.m. Aug. 30. Later in the day all areas north of Highway 70 went under an evacuation warning and some areas near the lake went into mandatory evacuation orders. Photo by Len Fernandes
News
August 30, 2021August 31, 2021 Editor

Two areas of the fire were very active today.  In Lassen County, fire has crossed containment lines and firefighters are engaged in an active fire fight trying to hold the fire from crossing Highway 44.  They were assisted earlier today by multiple large airtankers.  Western Pacific moved its fire train into the area to spray retardant from tank cars.  The rail line runs next to the highway for several miles north of the A-21 intersection.

Operations Section Chief Mike Wink expressed confidence that they were making good progress, but other sources indicated the fire crossed over the contingency line in multiple places and had run about 2.5 miles to the east.

It is not clear yet if they have been successful in holding the fire.  If the fire does cross the highway, there are no communities in immediate danger, but there many miles of open pine forest with a sagebrush under-story that can carry the fire very fast and very far.

Due to the increased fire activity along the highway, California Highway Patrol has announced that they are closing Highway 44 from the A 21 intersection north to Old Station.

On the south end of the fire, there was again today a large smoke column from the fire burning between Genesee Valley, Grizzly Ridge, and Lake Davis.  The column was leaning to the east for most of the day rather than going straight up as it has in recent days.  This is a result of the stronger winds today and suggest there will be more spread today than we have seen recently.

Firefighters have moved a small army of engines, crews, and equipment into the north end of Lake Davis as they build indirect fire line that will hopefully stop the spread toward Lake Davis and Portola.  The line construction was supported early in the day be several large air tankers.

Keeping the fire from Lake Davis and points east of there is less certain.  Crews are working on a series of fire lines ahead of the fire.  Their plan is to herd the fire back into the Walker Fire scar.  For this to succeed they need to get those lines completed, and have the right burning condition and enough time to implement a successful back-fire operation.  It is by no means a given that all the pieces will fall into place for that to happen.  The next two days with the continuing strong winds will be critical.

Winds will settle down some tonight but pick up again tomorrow when they will be a little stronger than today with maximum gusts of 35 to 40 mph possible over the ridge tops.  Firefighters expect another day of very active and likely extreme fire behavior.