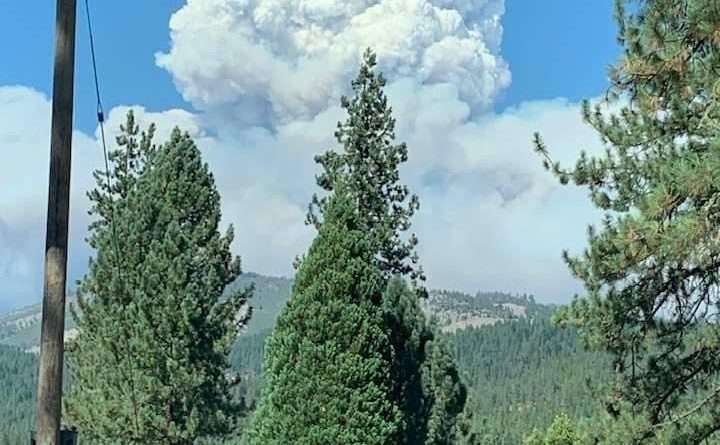 The view of the Dixie Fire from Graeagle yesterday afternoon. The smoke column is visible from as far as the Sacramento Valley and Nevada, but it's particularly frightening to Plumas County residents. Photo by Linda Satchwell
News
August 31, 2021September 2, 2021 Editor

The fire was very active yesterday as strong southwest winds pushed fire over containment lines in the north and fueled a major run of about 11 miles on the south end of the fire.  It continued to burn actively overnight.  The fire grew more than it has for several days adding more than 36,000 acres.

The wind driven run on the south lasted through much of the day and into the night.  A very ominous smoke column was visible from the Sacramento Valley to Nevada and it looked especially scary from just about anywhere in Plumas County.

The active fire in the southern portion of the Dixie Fire looks like an inverted triangle. The western leg lies along Grizzle Ridge and continues to hold.  The eastern leg runs from Grizzly Ridge above and a little to the east of Cromberg out to the northwest of Lake Davis and Red Clover Valley, stopping just short of Squaw Valley.  The northern leg of the triangle runs west to east from Genesee Valley, along the southern edge of the Walker Fire scar.

Unfortunately, the eastern edge of the northern leg has extended beyond the Walker Fire scar where it meets up with the eastern leg of the triangle.  The fire where these two legs meet is primed for another wind driven run today.

Weather  conditions today will be much like yesterday except that winds may be a little stronger.  Under those conditions, the fire will likely spread several miles to the east, burning toward the escarpment above Milford.

Fortunately fire managers have been aware of this possibility and started building and improving fire lines between the fire and Milford a few days ago.  Today, there is a very large contingent of engines, hand crews, dozers and masticators working hard to complete this work ahead of the advancing fire.

The problem is that fire lines are not effective against a fire throwing a barrage of spot fires a mile or more ahead of the main fire.  Picking up those spots is the key.  But that means positioning fire fighting resources out in front of the advancing fire.  At some point that becomes too dangerous and it becomes necessary to pull back to safer ground.

The other very active portion of the fire was the north end.  There was a very impressive smoke column  as the winds kicked up in the afternoon.  Fortunately much of the fire activity was heavy fuels burning within containment lines.

The fire did burn across primary and some secondary fire line in the northeast corner just east of the Caribou Wilderness.  There was some growth of the fire in this northeast corner but fortunately the fire appears to be holding within containment lines.

The winds today will test those lines in a big way, but there is a large contingent of firefighters in the area ready to take on the challenge.  It is likely the fire will throw spot fires over the line.  The key to success is having enough firefighters spread out and ready to pounce on those spots while they are still very small.  If they can do that, it will be a very successful day.

If there is good news on the Dixie Fire, it is that hundreds of miles of fire line have been tested by strong winds and is holding up to the challenge.  There are literally hundreds of firefighters still patrolling these areas to assure they remain in a safe condition.

The Dixie Fire area is under a Red Flag Warning today for strong winds blowing out of the southwest.  Those winds will be accompanied by single digit humidity.  Fire Behavior Analysts are predicting extreme fire behavior with spotting distance up to 1.5 mile.

The Dixie Fire has grown to 807,396 acres an increase of 36,213 acres over yesterday morning. It remains 48 percent contained.