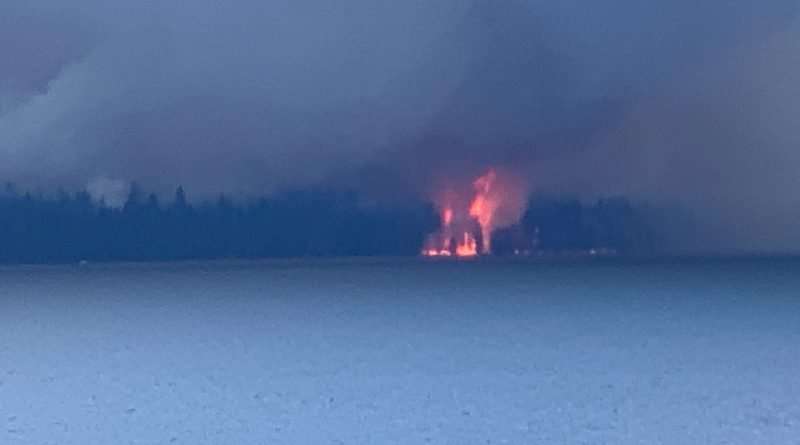 Brace yourselves. That’s what every fire official has said going into today’s Red Flag warning and the challenging conditions it will bring to the fire (as if they haven’t been already) into Friday. The fire has blown right past the planned containment and contingency lines in a number of places so firefighters will be severely tested.

Greenville evacuated Monday; the Lake Almanor Basin evacuated yesterday, with residents alerted with a jarring series of alerts; so what will today bring?

The fire is reported to be 274,139 acres this morning; considered 35 percent contained and has destroyed 45 structures and 22 outbuildings. There are now 12,182 structures threatened.

This is the brief update that was provided this morning (For Plumas County residents, the West Zone is responsible for the Chester/Lake Almanor Basin with an assist from the East Zone while the East Zone covers the rest of the county):

Fire continues to move toward control lines burning unburned interior islands and ridges. Steep terrain, heavy fuel loading, and wind in alignment with canyons is making control difficult. Fire activity continued into the evening hours following local winds and topography with active uphill runs, flanking, and single tree torching. Hot conditions will persist this afternoon across the fire area. Winds are beginning to respond with southerly and westerly winds becoming more prevalent gusting up to 20 mph. Afternoon humidity will continue to plummet into the teens across many locations. Crews continue to fight fire aggressively, construct and reinforce control lines, and protect structures. Mop up efforts have begun where appropriate.

The fire grew north with active burning due to Red Flag weather conditions yesterday afternoon. No additional structure damage has been reported. Mandatory evacuation orders have been updated to include areas north of Greenville and Lake Almanor. Overnight poor relative humidity recovery and dry conditions contributed to fire activity while crews monitored and patrolled the fire perimeter. Today hot, dry and windy conditions are predicted with a Red Flag warning in effect at 1 pm until Thursday at 8 pm. Active fire behavior is expected with strong, gusty winds. Today crews are building direct, indirect and contingency lines where the fire is active. Firefighters will be mopping up and patrolling the rest of the perimeter of the east zone diligently checking for fire movement.