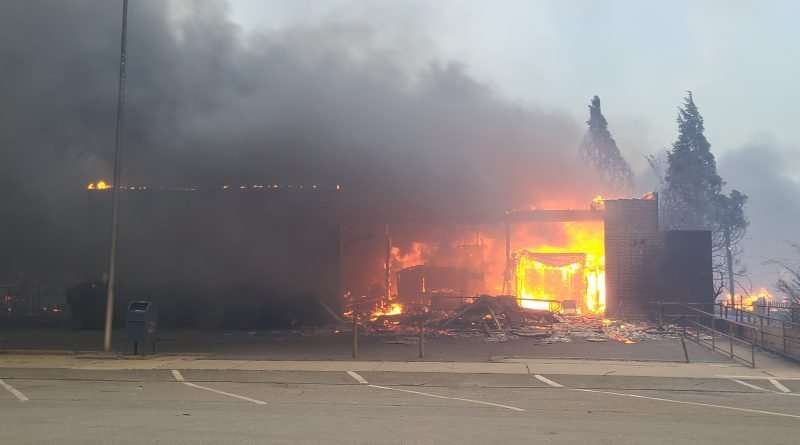 The Greenville Post Office, another hub of the town, is gone. Destroyed by the Dixie Fire on Aug 4. Photo by Mike Grant
News
August 5, 2021August 6, 2021 Editor

Tonight’s incident command briefing provided some answers – but clearly not all. After the scheduled presentations, it was announced that most of the questions had been answered. It’s unclear who is collecting the questions, because there was a constant scroll of questions that were not addressed – mostly from people asking about specific areas of concern.

Incident meteorologist Ryan Walbrun opened the presentation and addressed the changing weather patterns, which bring some good news and bad news. The west winds currently hitting the fire lines will last until roughly 9 p.m. before switching to a northeast flow, which will push the fire in the opposite direction. (Later in the briefing) Operations Section Chief Mike Wink said east winds will push the fire above the Lake Almanor Peninsula and then the southwest winds will return. This could challenge firefighters in that area.

But the good news is that the high winds are abating, which will result in an inversion layer over the fire that will lower temperatures and raise humidity. The long range forecast is hot and dry with no wind.

Walbrun said the fuel conditions, the high winds and changing wind directions of the past 24 hours led to the 80,000 acre fire increase.

Operations Section Chief Mike Wink presented the update for the west zone: reporting once again that the status remain unchanged from the Highway 70 corridor to Humbug.

The change begins with the multiple spot fires that manifested above Humboldt Road leading to the threat to Chester. “Winds from the southwest pushed it north above Chester,” Wink said. “In general terms, the fire has passed Chester, and burned along both sides.” No structures were destroyed within Chester proper, although a couple of buildings were destroyed outside of the central area.

The fire also flanked the Collins Pine mill and Wink credited fire crews from Susanville and Herlong for knocking down a fire in an outbuilding on the mill site.

Spot fires made their way into West Almanor, where it was reported that two structures and one garage were either damaged or destroyed.

Wink said there was nothing to report in Prattville; that the fire was not near the community as of now.

Operations Section Chief Kyle Jacobson presented the update for the East Zone and said that the fire remained in its current footprint throughout the entire southern perimeter.

“Most active part of the fire is here in Crescent Mills,” he said. There are currently engines, hotshots, and helicopters ready for structure protection.

Firefighters are doing structure protection in Canyon Dam this evening, where spot fires have been reported.

When asked about the East Shore, Jacobson said, the fire is not currently in the East Shore area, nor in Hamilton Branch or Clear Creek.

Plumas County Sheriff Todd Johns gave one of the most personal updates of the evening. “I’m a lifelong resident of Greenville,” he said, “I want to start by saying my heart is crushed” before acknowledging that for the residents of Greenville “their life now is forever changed.”

While there has been significant property loss, he said that on a positive note, there were no reported injuries. Assessments will begin when it is safe to do so. His office is still trying to track down some reported missing persons. He said the day began with 10 unaccounted for, but as of the meeting time, it was down to four.

Again he made a plea, as several officials have done over the past two days, for residents to heed all evacuations warnings and orders. “As the incident team has indicated more than once, this fire is making tremendous runs,” he said.

Johns also recognized the firefighters and addressed any assertions that they haven’t been doing their job. “I have not been in the office; I’ve been on the front line with firefighters. I want you to know that the efforts they are putting out is nothing short of amazing.”  He also warned residents that this fire is not over; “what I am telling folks at this time, is you need to prepare.”

Johns also addressed his decision to lift the mandatory evacuation orders for Greenville, only to reinstate them the next day. He said favorable weather for a number of days held the fire in check and, after much consultation, it was deemed safe for the residents to return though they remained under an evacuation warning. But then unanticipated weather spotted the fire above Greenville. “I don’t regret lifting that order,” he said. Johns thanked the public, his long-time friends, his staff and the firefighters during this difficult time.

Lassen County Sheriff Dean Growdon said, “With events like this there is no county line.” His office has been instrumental in helping Plumas County with evacuations and now that the fire is moving quickly toward Lassen, parts of his own county are under mandatory orders and evacuation warnings. He warned anyone who chose to stay behind to remain in their homes, or they would be arrested.

Since Lassen Community College was primarily set up for Plumas County evacuees, a second evacuation center has been established at Lassen High School.

Deb Bumpus, the LNF Supervisor, said that another fire camp is being established in Susanville, which should bring some consolation to residents there. (As the Dixie Fire moves into Lassen County, residents can follow more coverage provided by our sister website lassennews.com)

Chris Carlton, PNF Supervisor, addressed the “truly frightening” fire behavior firefighters are dealing with. He also addressed concerns that the fire wasn’t handled quickly. “On the Plumas National Forest we fight every fire with an aggressive initial attack response” and we bring in resources until it’s out. “As far as the Dixie Fire, we put everything we could at it.” He said it started within Cal Fire’s jurisdiction and “within minutes we were notified.”

As for what can be done moving forward, Carlton said “Cooperate and evacuate,” and added, “If you can see that column, have your stuff be ready to go. We make the best-informed plans that we can, but fire behavior can be unpredictable.”

Incident Commander for the East Zone Rocky Opliger expressed his deepest concern to everyone who has been affected and addressed the questions of whether there were firefighters in Greenville. “I guarantee you there were firefighters in Greenville,” he said. “They initially risked their own lives to save those in the community who hadn’t left.” They literally put them into vehicles and took them to meadows, he added. “Our highest priority is public safety.”

As for air operations, Opliger said there are 24 helicopters assigned to the Dixie Fire; the next fire has just six. “We have been number one priority for all assets,” he said.

The next unified command public meeting is scheduled for Aug. 7 at 7 p.m. and can be viewed via Zoom or on Facebook.