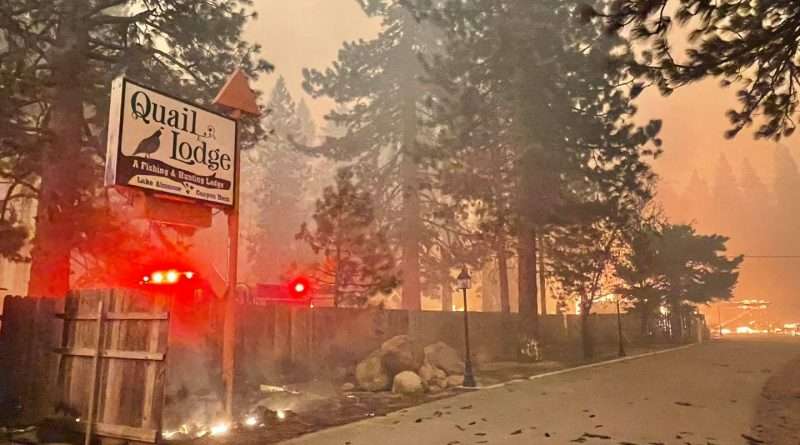 Unlike the Olympics — that very few people in Plumas County have been able to enjoy this year — no one locally wants to be in the top three, but that’s exactly where we are as we wake up this morning. The Dixie Fire is now at 432,813 acres making it the third largest fire in state history.

Even more sobering than the staggering numbers, is the loss of another community – Canyon Dam. John Crotty, a regular contributor to Plumas News with his weekly fishing report information, acknowledged in a moving Facebook post, the loss of his and his wife’s business, the Quail Lodge. “I hope Canyon Dam is the end of Dixie’s wrath for our beautiful Lake Almanor community,” he concluded his post.

Based on the Dixie Fire’s history that appears unlikely, as it continues to spread unchecked on its fronts threatening a host of other communities, now burning in four counties: Plumas, Lassen, Tehama and Butte. Overnight crews were working to protect Crescent Mills and its fate is currently unknown.

Following is this morning’s incident command update, however it is short on details, particularly on the West Zone. More information will be provided as the morning unfolds.

On the East Zone, the fast-moving fire has reached the southern shore of Mountain Meadows Reservoir and was expected to remain active and dynamic overnight with flanking, tree group torching and fire running along the crowns of treetops.

Priorities for wildland firefighters were preservation of human life and utilizing engines, hand crews and bulldozers to control spot fires in the Canyon Dam area, provide structure protection along the east shore of Lake Almanor, the community of Crescent Mills and the remaining homes in Greenville.

Fire Managers are also strategizing tactics to protect cultural resources, critical infrastructure, and private property in the path of possible future fire growth near State Route 44 around Peninsula Village. Multiple additional resources, which will help with the implementation of these strategies have been ordered.