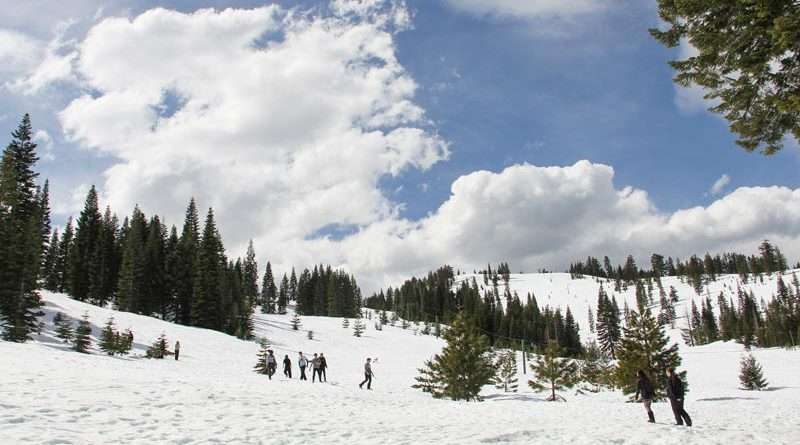 “Most people don’t survive being caught in an avalanche,” said Patty Llamas, addressing a group of eighth-grade students. “At best, you have 10 to 30 minutes and your chances really start going down after 10 minutes.”

Putting his arms up, elbows bent in front of his head, Egloff told the students to remember to make an air pocket for their faces so they’ll have space to breathe and slow down their breathing to save oxygen.

They spent several days in March taking eighth-graders from the junior-senior high schools in Chester, Greenville, Portola and Quincy to either Lassen National Park or the Johnsville Ski Bowl at Plumas-Eureka State Park for hands-on science education.

The mission: Teach students about the laws of physical science with an emphasis on understanding the dangers of avalanches.

“I am pleased with the quality of the field program that Max and Patty have created and delivered,” Wade commented.

He added that the district’s science program focuses on encouraging K-12 students to apply their science inquiry locally in an authentic manner.

The lessons, fieldwork and experiences all work together using “the rich geography and phenomena of our Feather River homeland to provide meaningful and memorable learning experiences for our students,” he said.

“Kids tend to normally learn these scientific principles in an indoor laboratory environment when we have the greatest science lab right outside every classroom door,” Wade explained.

Avalanches are a phenomenon that all kids know about, he said. But few students, if any, understand them. They know that snow coming down a snow-covered slope is called an avalanche, but they’ve never drilled into what it really is.

“Our local mountain kids should all be avalanche aware,” Wade says. “Whether they sled, ski, snowboard, snowshoe or snowmobile, their life can depend on it.”

Understanding how the snowpack works as a whole, what causes avalanches, and how to predict the danger is knowledge and skill that PUSD wants for local students.

What to know about avalanches

The instructors reviewed the principals of heat conduction, convection and radiation by having students sit on the cold, snowy ground (losing heat from their bodies), turning their faces to the sun (losing heat through the air) and using the radiant heat of their hands and pressure to form snowballs.

Then it was right into avalanche awareness.

“What to know about avalanches?” Egloff asked. “About 40 avalanches per year occur in Plumas County. They are powerful and dangerous. One just happened two weeks ago in the valley behind us (in Johnsville). It took out 40 trees.”

Anatomy of an avalanche

With avalanche studies, they showed the students, you’re thinking about how the snowflake bonds are becoming stronger or weaker. If there are fewer bonds, the layer is less cohesive, weaker and more likely to collapse or fail. Sacks of flour, sugar and dehydrated potato flakes sprinkled, dumped and packed down over tilt boards with slick tracing paper, burlap and simulated boulders did the trick.

Students took turns creating conditions of most to least friction to approximate how much the layers of ground terrain change after each weather event. Sugar represented a light snow cover over the mountainside. Flour simulated a heavy snowfall from storms. Sprinkling dehydrated potato flakes over the land approximated a long cold spell with really light snow.

Next, they lifted the sample boards inch-by-inch and noticed the “snow” began sliding off the surfaces at 35 degrees and higher. They learned about the start zone, the flanks and the end zone of an avalanche.

The experiment showed the snow cover broke apart on the smooth surface because there was less friction to hold it back. On the rocky side, at an angle of about 40 to 45 degrees, it broke first below the boulders. Right below protruding objects like rocks are weaker zones, or trigger points for an avalanche to start.

“So be aware if you go near a zone like that, you could trigger an avalanche,” Llamas said.

On the second sample board, the rough burlap side with no rocky protrusions began breaking apart when the board was tilted to 60 degrees because the surface had more friction under the snow. However, the side with several “boulders” on it began to break up at a 50-degree angle.

“At 30 to 45 degrees in slope is where most avalanches occur,” Llamas told the students. “Why is this important? Well, we like to ski and snowboard. Up here, you’re recreating in areas where avalanches are most likely to occur.”

Egloff backed her up.

“The same slope where an avalanche is likely to happen or is going to fall is the same one we all like to ski and snowboard on,” he said.

He added that ski resorts do their best to avert avalanches, “but when you go into the backcountry, if you’re hiking down below one of these potential zones, there’s a chance an avalanche could fall on you. So hike up along the ridgelines or stay way down in the valley, far from avalanche terrain.”

The next phase of the science lab involved digging snow pits.

Llamas had the students dig down about 150 mm in depth to see what snowpack layers look and act like. She said making a pit helps them learn to determine the weaker layers and see the very cohesive ones.

“This exercise teaches you how to figure out for yourselves if you are in an area where you could trigger an avalanche,” she said. “If you find you are, go find another spot to ski, hike or snowboard.”

The students conducted three tests: one for resistance, one by hand and a compression test.

“If I find a weak layer, that’s a big red flag for me, telling me not to go on that slope,” she told the group.

Egloff also worked with the students to discover what happens when we get rain after snow and it turns to ice. The kids dug into a wall of plowed snow to see and feel the difference between the layers.

“Throughout winter, the icy layers form every couple of weeks,” the instructor showed them. “Thin layers are easier to break. A thicker layer can be triggered (to break) by something heavier going over it, like a snowmobile.”

What else is most dangerous, he asked? Extreme weather changes like melting and freezing overnight. Or a heavy snow that falls on a thin layer of ice.

Students learned there are avalanche scientists who take measurements and post their results online, on a scale of one to five, about the dangers of an avalanche occurring that day.

“So there’s a career you can think about,” Egloff said. “Sierra and Shasta counties each have a scientist. We don’t have one here in Plumas County, but our backcountry and outdoor folks do the estimates here. If you see a three is predicted, don’t go out that day. We want a one!”

So be sure to check the weather forecast and have a good crew to go out with, Llamas advised.

They also covered the kinds of tools available for backcountry adventures, like collapsible probes to help locate a friend under the snow and transceivers that emit a pulsed radio signal.

Then it was time to gather up the large flats of cardboard scattered about by the students.

“You’ve earned some Newtonian Sledding!” Egloff announced with a smile.

No one remembered to bring wax to minimize their friction and maintain some velocity, but some students had a bottle of dish soap to add some slickness to their makeshift cardboard sleds. They gave themselves names like the Grounded Sputnik Team.

Before the fun got underway, Egloff said, “Raise your hand if you know Newton’s three laws of motion.”

They did, and then they put them to the test.

1) Every object in a state of uniform motion will remain in that state of motion unless an external force acts on it. “So your sled will stay at rest until you push off,” Egloff said.

3) For every action there is an equal and opposite reaction. “So everybody keep safe,” came Egloff’s final advice. “If you disrespect the mountain, somebody’s going to get hurt.”