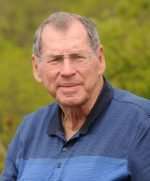 Barry was born on June 10, 1933, at Mrs. Moseley’s Birthing Home on Railroad Ave., in Quincy, to Samuel Lorin Bailey and Helen Louise Armstrong-Bailey. He joined his sister, Virginia Lee Bailey. His parents had recently moved to Quincy from Roseville in 1932, where his father was a Pharmacist at the Quincy Drug Store. Barry was named after his father’s employer, Barratt Edwin Huskinson, who owned the store.

Barry attended Quincy Grammar School and Quincy Junior-Senior High School, graduating in 1951. During his childhood, Barry became very ill, resulting in the removal of one kidney. Unable to participate in sports, Barry participated in the band class, and learned to play the Clarinet and Saxophone in the school dance band. After graduation, he attended Chico State College for one year, then transferred to the University of California, Berkeley for another year.   Deciding to follow in his father’s footsteps, Barry then attended the University of California, College of Pharmacy, graduating in 1956.

Barry always enjoyed airplanes, and when he was home during the summer from school, he learned to fly his father’s Cessna airplane, becoming a licensed pilot in 1953. Barry also worked during his summer breaks for the U.S. Forest Service, a lumber mill, and the Red & White Grocery store.

While working for the Red & White Grocery store delivering groceries, he met Peggy Joyce Hillis, whom had recently moved to Quincy from Indiana, to live with her aunt, Barbara Leonhart. A loving romance developed between them and on August 8, 1954, Barry and Peggy were married at the Quincy United Methodist Church, followed by a reception at the Leonhart Ranch on Chandler Road. They lived in Berkeley while Barry completed Pharmacy school. In January 1956, while attending school, they welcomed their first child, a son, Samuel Lorin Bailey II, whom they named after Barry’s father.

Upon graduation, Barry completed his final training at a pharmacy in Palo Alto, before moving his family to Chico, where he accepted a position at Lee Pharmacy. In May 1958, they welcomed their second child, a daughter, Barbara Ann Bailey, named after Peggy’s aunt.

In October 1989, Barry sold the Quincy Drug Store, and continued to work as a relief pharmacist throughout Plumas County. He also worked at the Plumas District Hospital and for three years as a part time pharmacist at the Bel-Air grocery store in Yuba City, traveling back and forth during that time. Barry was dedicated to his profession, and was a licensed pharmacist for over 50 years.

Barry was a past President of the Quincy Rotary Club, Quincy Lions Club, and Quincy Chamber of Commerce. He was also a member and usher at the Quincy United Methodist Church and hosted Bible study groups at his home for 12 years.

Barry was very talented and gifted, always keeping busy with various projects. With the assistance of Phil Miller, they researched and developed a photo slide presentation documenting the history of Quincy. Barry became a certified scuba diver and often built model airplanes, carved ducks and horses, painted pictures of his favorite airplanes, made clocks, and built furniture.

Barry enjoyed playing golf, participating in the local football pool, playing chess, cribbage and Hearts with family after holiday dinners. Barry enjoyed long holiday weekends, often taking Jeep trips exploring the backwoods of Plumas County with friends and family. In his later years, Barry and Peggy could often be seen driving around Quincy and out Chandler Road, sometimes as many as three times a day, enjoying the beauty of the town. They also enjoyed walking in Gansner Park and at the airport.

In May 2018, Barry and Peggy moved into the Oakmont at Montecito Assisted Living Facility in Concord to be closer to their son, Sam. Barry enjoyed the many musical events they sponsored and listening to the many other residents in the dinning hall.

Due to COVID-19 pandemic restrictions, services for Barry were delayed. A private graveside service will take place in the Old Quincy Cemetery at 11:00 a.m., Saturday, July 24, 2021. The family invites friends to attend a Celebration of Life for Barry, following the Internment from 12:00 p.m. to 3:00 p.m. at the home of Dennis and Karen Barker, 1419 Bucks Lake Road, Quincy. Memorial donations can be made to the Quincy Volunteer Fire Department and the Plumas District Hospital.

On behalf of Barry, his family would like to thank the Quincy community for your support, love and friendship you provided to Barry and his family over the past 87 years.   We would also like to thank all the staff at Oakmont of Montecito and Hospice of the East Bay for all the support they provided the past two years.