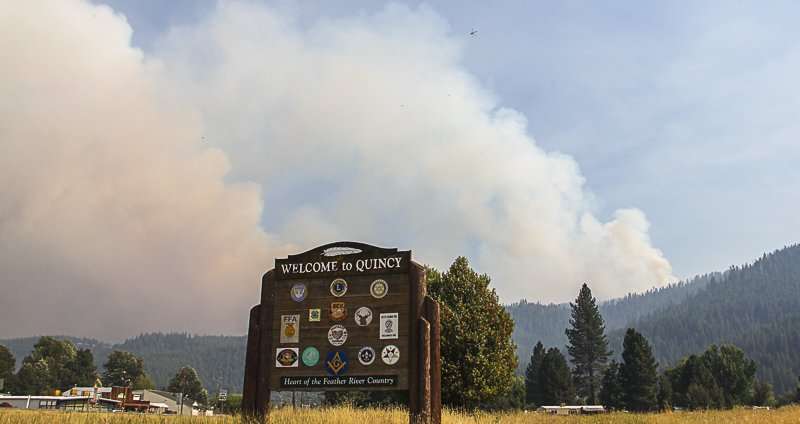 While the Forest Service serves as incident command for the Claremont Fire, its firefighters aren’t the only ones working to contain the blaze and protect structures — volunteer fire departments and individuals with heavy equipment do their part.

Plumas News staff caught up with Quincy Fire Chief Robbie Cassou this morning and he discussed the Claremont Fire.

Cassou said that his department also reported a relatively quiet evening overnight. Four engine crews from the Quincy department, along with fire teams from both Beckwourth Fire and Graeagle Fire, were on standby to provide structure protection on both La Porte Road and in East Quincy.

“The morning smoke and calm winds serves as insulation from the sun’s heat which really helps slow the fire’s activity,” Cassou said. He expects that will change later this afternoon, adding that by around 2 or 3 p.m., firefighters will have a much better idea of what to expect from the winds and its effect on the fire’s behavior and how that will impact the East Quincy and La Porte Road areas.

This afternoon, he said that in addition to Beckwourth and Graeagle fire departments’ equipment here and on standby, the Quincy department will have five engines staged at key locations. He said there will also be several more strike teams arriving today from all over the region and the Forest Service has four aircraft in Quincy now with five more arriving today to help fight the fire.

Cassou said the spot fire that flared up behind downtown Quincy in the Boyle Ravine area Thursday afternoon doesn’t appear to be a factor any longer. “However, I would strongly encourage residents in downtown Quincy to remain prepared and on high alert. We can’t always predict the winds but we do know they can quickly change a fire’s behavior,” he cautioned.