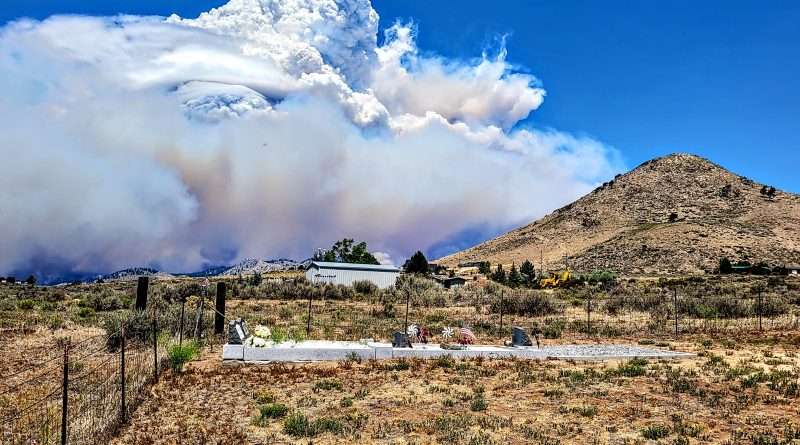 The smoke from the Sugar Fire looms above Chilcoot at the Chilcoot Cemetery on the afternoon of Friday, July 9. Photo by Lauren Westmoreland
News
July 9, 2021July 9, 2021 Lauren

California Interagency Incident Management Team 4 System Operation Chief Jake Cagle gave a brief update on the afternoon of Friday, July 9 via livestream, noting that the Beckwourth Fire Complex, comprised of the Sugar and Dotta fires, is “an emerging incident.”

As of approximately 2 p.m., Cagle stated that the Beckwourth complex is now at 24,526 acres with 11 percent containment, and an estimated 13,000 of growth on the Sugar Fire last night.

Cagle explained that the fire moved laterally through the night, and teams are working around the clock to get a dozer line in place and maintain it, in an attempt to lock the fire in place away from Highway 70.

Spotting in the Last Chance Canyon area drove the primary fire growth overnight and ran up to the escarpment on Adams Peak where it is currently sitting.

There is a special team of resources, the Doyle Group, which has gathered on Constantia Road to prepare for the fire to come into the area and protect the infrastructure as the fire enters a fuel change, from forest to smaller fuels.

Aircraft has been heavily working the leading edge of the Sugar fire, with southwest winds expected to kick up by 3 p.m. and last through the afternoon. “That means the fire will continue to push towards the northeast,” Cagle said.

Over at the Frenchman Lake and Frenchman Village area, crews worked diligently to protect structures, and worked on picking up the fire in the flanks of the north end of the fire.

US 395 is currently closed north of Hallelujah Junction, and updates will be published on various agencies involved in the incidents’ social media and disseminated through this platform.

In Lassen County, the Constantia Road area up to the Doyle Loop is under mandatory evacuation. Scott Road to Highway 395 are currently under evacuation warning.

In Washoe County, per Truckee Meadows Fire and Rescue, it is anticipated that the Sugar Fire could reach the US 395 by 4 p.m. with closures anticipated from Hwy. 70 to Doyle.

It is imperative that residents travel southbound on Red Rock and do not use the northern Red Rock exit on US 395. Residents of the Red Rock and Rancho Haven communities are asked to make preparations to evacuate livestock and large animals. The Reno-Sparks Livestock Events Center is opened to accommodate animals, and Hug High School at 2880 Sutro Street is the evacuation center for people and small animals if needed.

This is a developing story and will be updated as more information becomes available.