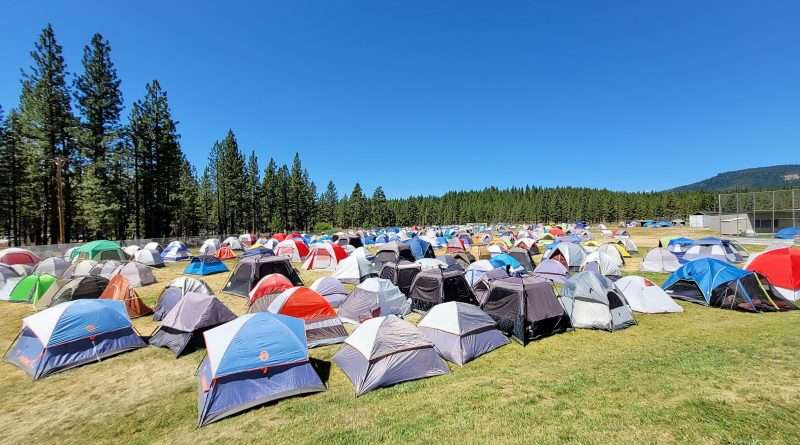 Fire fighters from around the state camp out in tents spread across the fields at C. Roy Carmichael Elementary School in Portola to get some sleep after 14-16 hour long shifts fighting the Beckwourth Complex. Photo by Lauren Westmoreland
News
July 12, 2021 Lauren

“We’re making really good ground,” Cagle explained, despite highly erratic, changeable winds and ongoing high temperatures. Fires of this magnitude often create their own weather, and such behavior has been experienced by crews over the past two days, especially in the Doyle area.

Cagle pointed out on a map where lines have been secured by hand crews and dozers, with a combination of road, hand line, and dozer line holding the fire on various flanks of the Sugar fire.

Crews have been working to contain the fire to the 01 Road up to Sugar Loaf in Plumas County, and have experienced some spotting as well in that vicinity. “We had southwest winds forecasted up to 35 miles per hour, but today, you’re seeing smoke because of a southern push which is keeping the fire lateral,” Cagle said.

It is expected that there will be a southwest push by winds again overnight, but crews will continue to work the fire through the night to keep the fire in its footprint.

In Lassen County, mandatory evacuations remain from Granier Road through Doyle where it runs into North Constantia down to the Sierra County line. From Fish Springs to Flanagan is cleared of warning, as well as Rancho Haven in Washoe County.

Dixie Lookout is currently secure all the way down to the Maddalena area, and there are resources doing contingency lines in the event of a wind shift as a backup plan.

In Plumas County there are still mandatory evacuations from Maddalena east to all of Chilcoot and Vinton. If fire behavior remains moderated, it is expected that repopulation in the Chilcoot and Vinton areas will begin around noon tomorrow.

Fire Behavior Analyst Diondray Wiley emphasized again that the current probability of ignition is 100 percent, with longer burn periods during the day of 12-12 hours. He also noted that there had been especially erratic and turbulent winds on the west side of the fire, which add to the rugged terrain and record-breaking temperatures to make firefighters jobs even more difficult.

Incident Commander Rocky Oplinger soberly noted that there had been significant damage to structures in the path of the fire, and acknowledged the difficulty of the situation, and informed all that the burned areas are in the process of being assessed.

Both Lassen and Plumas county sheriffs spoke to reiterate the need for those in the community to heed evacuation warnings and orders, with Plumas County Sheriff Todd Johns thanking the community for their patience during this trying time.

Evacuations at Frenchman’s Lake and in the Dooley area are expected to continue for some time, and PCSO is conducting round the clock roving patrols, in conjunction with other agencies such as the California Highway Patrol, to enforce the safety of evacuated communities. All who have properties, especially those with homes on the properties, are encouraged to reach out on the Plumas County Sheriff Office website with their information so that evaluations can be done, with a team going in tomorrow to do assessments in areas where it is safe to do so.

At noon today, mandatory evacuation orders were lifted for all but the Doyle area on the west side of 395 and north end of Constantia Road and Doyle Grade area, which are remaining closed for the time being for a variety of reasons, according to Growden, including downed power lines and a threat that still exists from the Sugar fire. More information is available on the Lassen County Sheriff Office website.

There are also 24-hour patrols and roadblocks in the fire affected areas of Lassen County to maintain security of the area and prevent looting. Milford down to Scott’s Road remains under a warning for the time being. All are asked to stay vigilant and observant.

There are a number of people in the emergency shelter in Susanville at this time, with resources such as Red Cross and Salvation Army at hand, and as of today, at least 33 primary structures identified have been destroyed by the blaze in Lassen County.

“Right now, we need to try to focus on supporting each other and getting through this,” Growdon said. “We appreciate that this is a real trying time for our community.”

At this time, there are no significant changes regarding roadway closures, with US 395 and Highway 70 remaining open, and SR 284/Frenchman Lake Road remains closed.

Mayor Bill Power of the City of Portola spoke briefly to first thank the crews and community for their support, and to also note that surplus food from the fire camo each day is being donated to the local food bank for distribution to those in need. Powers also commented that at eight days in, many had run out of adrenaline and are now running on “pure grit at this point.”

“It is a lot of strain for everyone mentally, and we appreciate everyone involved, including members of the community, being considerate of the situation.”

Plumas National Forest Agency Administrator Chris Carlton asked that people please be more aware of stopping bad information and rumors from passing around the internet, especially on social media platforms, and that the experts are available for questions and accurate information at any time.

One rumor addressed was regarding the initial attack on the Dotta and Sugar fires, and whether a full attack had been launched in a timely manner on the Sugar fire specifically. Carlton answered in the affirmative, that two air tankers had immediately been pulled off of the Dotta fire, along with a variety of other resources which included VLAT drops, helicopters, a strike team, and multiple local agencies from fire departments to EMS and law enforcement, along with community members with livestock trailers to assist in evacuations.

“We look at the conditions and the fact that that fire was never contained and what happened is the wind picked up some heat and took it across the line in these dry, windy conditions, and from that moment on, we were chasing that fire in full suppression,” Carlton explained.

Last, Carlton noted that there had been a variety of negative comments floating around on social media regarding the fire fighters, and that eight days in, it was very disheartening for them to see these posts.

“The adrenaline is wearing off, and it is grit keeping these folks working 14-16 hours a day. Many of these people are your neighbors and live in your communities. I don’t care which agency, they are counting on us as community members to support them when they are out there, so please, let’s continue to support the firefighters that are out there working so hard,” Carlton said.

Bureau of Land Management Agency Administrator Emily Ryan briefly reported that there were still concerns about heat from the northern and eastern portions of the Sugar fire and affirmed their support in any way possible through this incident.

One other matter that was noted was the recent fire pilot fatality in Arizona which led to a protocol that grounded lead planes and affected operations at the Beckwourth Complex in recent days, as lead planes guide the tankers in to drop water and flame retardant. “Please continue to pay attention to your local sheriff’s directions and orders, and we will continue to work to fight this fire,” Cagle concluded. The next virtual community meeting will be held via the USFS-PNF Facebook page on Wednesday, July 14 at 7 p.m.