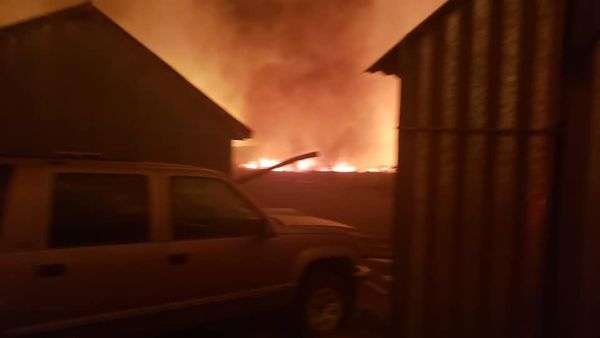 This photo was taken by Doyle homeowner Laura Day as the fire neared her property. Her home was spared but some of her neighbors weren't as fortunate. Photo by Laura Day
News
July 11, 2021July 12, 2021 Editor

UPDATE 1:20 p.m. The CHP reports that Highway 395 is closed again between A26 near Doyle to the Highway 70 Junction due to erratic fire behavior.

UPDATE  9:40 a.m: The Doyle Fire district reports that approximately 20 homes are lost to the fire in Doyle. Affected residents can contact the Red Cross at 844-236-0153. Although 395 has reopened the evacuations are still in effect and you won’t be allowed back in.

UPDATE 9:30 a.m.: Highway 395 is open. Use caution while driving due to the presence of firefighting personnel.

The Beckwourth Complex Fire is now the largest fire in California as it continues to push northeast, closing Highway 395 and destroying structures in its path. The Doyle Fire Protection District has confirmed that some structures have been lost in the town of Doyle, home to 675.

Still this morning, the latest update from Forest Service lauded the fact that “despite a 22,600 acre growth on the Sugar Fire yesterday, firefighters were successful in holding the fire on the south and southwestern flanks, while catching all slopovers along Highway 395, which forced the closure of the highway at 4:30 p.m. yesterday. Firefighters also worked hard to reach 99 percent containment on the Dotta Fire.”
The briefing also addressed other successes: “Indirect dozer line was constructed in several areas for structure protection, including behind Dixie Valley to Dixie Lookout. Firefighters also progressed in constructing dozer lines past the town of Doyle, behind structures along Old Highway 395 and Bernice Lane. In the Doyle Grade area, Hotshot crews worked hard to contain slopovers on the northern side of the fire.
Nothing in this morning’s briefing addressed the known structure loss in Doyle, but there has been loss as confirmed by the Doyle Fire Protection District and the myriad residents posting photos to social media documenting the burning structures.
On other portions of the fire, working northeast of Scott Road, crews will use the concrete rail bed to initiate strategic firing operations in order to secure the eastern edge of the fire.
And there was good news for the southern portion of the fire where crews were successful in firing operations from dozer lines constructed on the south flank of the fire, eliminating fuels that posed threat to nearby communities such as Chilcoot. They were also able to hold and secure Maddalena and Dotta Guidici Road.
Extreme fire behavior is expected again today with increasingly gusty winds up to 25 miles per hour and relative humidity down to 9 percent.
Air operations are robust on this incident, including fixed and rotor wing. An unmanned aerial system (UAS) drone is arriving today to assist in scouting and strategical firing operations. A dedicated night-flying helicopter is also available for any emergency firefighter extraction.
A damage assessment team has been ordered to validate reports of structures damaged or destroyed.
In addition to the evacuations in place for Plumas and Lassen counties, the evacuation for Washoe County, Nevada was reinstated yesterday late afternoon for the communities of Rancho Haven, Fish Springs and Flannigan Flats. Some evacuation warnings also were upgraded to mandatory along highway 395 in Lassen County.
Quincy CHP said that it expects Highway 395 to remain closed indefinitely going north from the junction with Highway 70 at Hallelujah Junction, but the Forest Service is reporting that it is expected to reopen to one-lane controlled traffic this morning. Stay tuned.
The Dotta and Sugar fires broke out June 30 and July 2 respectively, both caused by lightning. On July 3 they became the Beckwourth Complex, thought the two fires have not merged.
Please check your local county’s social media pages for the latest on evacuations in your area, and be sure to register for your county’s CodeRed emergency alert system:
• Plumas County: https://public.coderedweb.com/CNE/en-US/6EB9E0DB3133
• Lassen County: https://public.coderedweb.com/CNE/en-US/B69B31DD99B6…
• Washoe County: https://public.coderedweb.com/CNE/en-US/169EBBD0A3AE
Forest Closure: https://inciweb.nwcg.gov/incident/closures/7601/