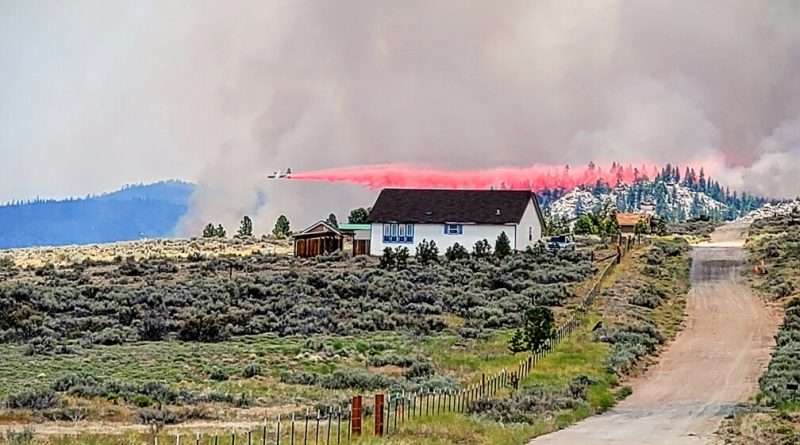 A plane drops retardant near Chilcoot on the advancing Sugar Fire, part of the Beckwourth Complex, on July 10. Photo by Lauren Westmoreland
News
July 10, 2021July 11, 2021 Editor

During tonight’s community meeting on the Beckwourth Complex Fire, those tuning in learned that the fire made a significant run this afternoon and grew to more than 60,000 acres. The fire has forced more evacuations — including in Lassen County and Nevada, and has closed Highway 395 north of the junction with Highway 70. It also cut off power to some residents for a period of time as the fire threatened Plumas Sierra Rural Electric transmission lines.

Jake Cagle, the operations systems chief for the Incident Management Team 4, described the significant run the fire made (toward Doyle) and the threat that it posed to firefighters. “The firefighters had to withdraw,” he said, until it was safe to re-engage. “There was significant impact to Doyle on both sides of the 395,” he added with mandatory evacuations in place for Doyle. He said that crews were actively engaged in the area and working to protect structures.

As for other areas of the fire, Cagle said that crews to continue to work on dozer lines along the Highway 70 corridor and are focusing on structure protection in the Dixie Valley area.

The good news of the night is that the Dotta Fire is now 99 percent contained.

Meterologist Dan Hardy said that the southwest winds that are pushing the fire will lessen tonight, but will be increasing over the next couple of days. Very hot conditions are expected to continue through Tuesday, with some temps as much as 15 degrees above normal. While temperatures will taper off over the course of the week, the winds will not and the air will continue to be very dry.

Those are all conditions that Diondray Wiley, the fire behavior analyst, said will set the stage “for large fire growth,” which happens through long- and short-range spotting. It’s the long range spotting that starts new independent fires. He attributed the large run today to heavy, heavy timber that caused long range spotting and predicted that this “will continue to grow over the next five to six days.”

Incident Commander Rocky Opliger reminded those attending the virtual community meeting that  it’s critical to remember that the firefighters and other emergency personnel who are working the family all have families. He wants to keep them safe and said the best way that can be achieved is to evacuate when told. “The highest percentage of fatalities come when people wait to the last minute to evacuate,” he said.

There are a number of evacuations currently in place in Plumas and Lassen counties, as well as in Nevada. As those situations can change rapidly, the public is encouraged to check with their local jurisdictions for the latest information (links included below).

Carson Wingfield, patrol commander for the Plumas County Sheriff’s Office, said that the mandatory evacuations in Dixie Valley area and the north side of Highway 70 “will more than likely remain in effect for quite some time.” He said that the people who are choosing not to evacuate will put other people “in harm’s way because of that decision.” He said that the areas are being regularly patrolled by law enforcement.

Lt. Erik Egide addressed the Highway 395 closure that extends from A26 just north of Doyle to Highway 70. Red Rock is also closed because it is in the middle of the fire zone. Egide described the closed stretch of 395 as being a “really dangerous area to be.” The closure will be constantly re-evaluated. In response to a question later in the meeting, Egide said that anyone needing to get from Susanville to Reno would need to take the long route through Quincy.

Portola Mayor Bill Powers reminded residents that the evacuation center is still available at 171 Gulling St. and a cooling center has been established at the Memorial Hall. He asked residents in the greater Portola area to be mindful of the  “tremendous amounts of equipment moving in Portola.” Both the C. Roy Carmichael and Portola High School campuses are being utilized by firefighters and there is a lot of traffic in the area.

Though there were a number of inquiries about structures and that information is not yet available. But officials were able to confirm that no ranches on the south end of the fire burned.

One of the most pointed questions came toward the end of the meeting: Does the forest service acknowledge that they left this fire too soon? Cagle reiterated what he said during the last community meeting — that resources were concentrating on the south flank of the Sugar Fire, with most of the available resources allocated to the Dotta, which had significantly less containment. He said that “infrared imaging indicated there was no heat signatures in the area where it came out of. When it did come out we ordered air tankers; they responded rapidly.” He said that while crews also engaged, they didn’t have an anchor point and for their safety they had to disengage. “We took resources off of the Dotta and they worked in conjunction with aerial resources,” he said. But the fire made its run.

In response to a number of questions involving air resources, Cagle said that they have been used extensively, but there are times when the fixed wing aircraft cannot fly — such as the early morning hours when the inversion is in place or when it becomes too windy.

The next community meeting is scheduled for Monday, July 12, at 7 p.m.

Please check your local county’s social media pages for the latest on evacuations in your area, and be sure to register for your county’s CodeRed emergency alert system:

Weather today will be hotter and dryer, with low relative humidity and highly receptive fuels. Winds will be slightly lighter, out of the southwest and gusting around 20 miles per hour. With the forecasted heat wave this weekend, temperatures are expected to be 15 degrees higher than normal, up to 100 degrees in the lower elevations. Poor humidity recoveries are expected at night.