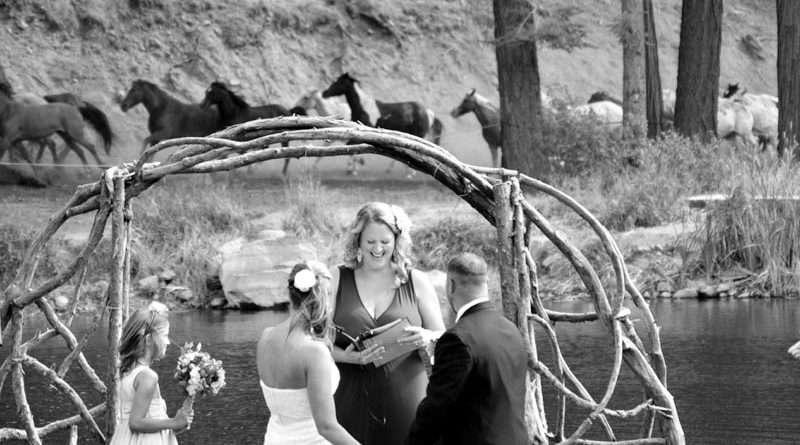 Holly Buus marries a couple at Greenhorn Guest Ranch. She dresses to match the wedding party as much as possible, but always wears a flower in her hair. Photo submitted
News
March 18, 2020March 19, 2020 Debra Moore, Managing Editor Wedding Guide

The bride and groom will answer “I do,” but who will do the asking?

It’s a question that can get lost in all the hubbub of choosing a venue, a color scheme, a band, a caterer, a wedding cake, a dress, etc.

But it’s an important choice because it can set the tone for the wedding ceremony itself and make it memorable for all the right reasons. And in some cases the choice will dictate whether a couple receives prenuptial counseling.

Will it be a member of the clergy? A friend or family member? A justice of the peace?

In Plumas County there are a host of options and recently I talked to three women who perform ceremonies locally and elsewhere: Kathy Williams, the Plumas County Clerk Recorder, whose office issues marriage licenses; Kendrah Fredricksen, pastor at Our Savior Lutheran Church in Quincy; and Holly Buus, a Quincy resident who procured an online license to marry family members and friends.

It was surprising to learn just how many ceremonies Williams and her staff perform in and out of the courthouse.

“We do them in the foyer, at our front counter, under the trees …,” she said.

Sometimes it’s a well planned out event with family, friends and attendants; other times it’s spur of the moment.

“Sometimes people will decide when they’re filling out the paperwork,” she said.

For Williams, that doesn’t make it any less special. “It’s one of the happiest events that ever happens here,” she said.

She recalled one time pulling flowers from an office arrangement and making an impromptu bouquet for one bride.

Williams has married couples in her own office and also at local venues such as Greenhorn Ranch.

When asked if she gets nervous, she said, “Every time. It’s an intensely emotional event.”

Couples can get married during regular business hours or make arrangements for Williams or one of her staff to officiate at other locations after hours. They can also use her office to obtain a one-day permit to have a family member or friend marry them.

She and her staff offer both a short or longer version of the ceremony for the bride and groom to choose from or the couple can recite their own vows. “But they have to say they are willing to marry the other person,” she said.

While Williams and her staff do everything they can to accommodate a courthouse ceremony, she said that larger counties have “entire rooms” dedicated to the events. They even offer rings, photography, guest chairs and more.

To find out more about obtaining a marriage license or getting married at the courthouse, call 283-6256 or go online at countyofplumas.com.

Pastor Kendrah has performed weddings throughout the country, mostly for family and friends. And most of those have been outdoors with couples that have written their own vows.

“I try to adjust what I do for the ceremony,” Pastor Kendrah said. “And I usually do a short homily on marriage.”

If she marries someone through the Lutheran Church then they are required to participate in a “prepare and enrich” training that requires couples to talk about various aspects of marriage and life together.

She thinks that key to a successful marriage is the ability to communicate well about any subject.

When asked if she had a favorite wedding, she selected her cousin’s. “Usually a pastor gets invited to a reception and they don’t know anyone, but I knew almost everyone there.”

As for any bloopers, she said that she always asks the couple how they want to be introduced after the ceremony. “One time I said, “I want to introduce Mr. and Mr. …”

To find out more about being married in the Lutheran Church or to have Pastor Kendrah officiate at your wedding, call 283-2546.

She also wants it known that she is available to perform LBGTQ wedding ceremonies.

Holly Buus has now performed several weddings, but the first one she got “roped into it” when the daughter of a friend from Southern California married a Quincy man.

When the mother of the groom said, “I couldn’t get a minister,” Holly responded, “I should just get ordained and do it.”

Just 20 minutes later, her friend called and said, “You have to do it.”

So she did. She went online and received her letter of ordination.

That wedding took place at Greenhorn. Other locations include a mansion in Yerrington, Nevada; a suite at the Peppermill in Reno and a field in Taylorsville.

In preparation for the ceremony, Holly meets with the couple to discover what they want. Relaxed? Traditional?

She sends them sample scripts and then can adjust them to fit the couple. Sometimes they write their own vows.

She admits that she gets nervous before performing the ceremonies, but said, “My husband gets even more nervous than I do.”

Sometimes, her officiating role morphs into being a quasi-wedding planner if there isn’t one.

And sometimes, she can get emotional. “The last wedding I did was for my close friend’s son and they wanted me to put something personal in it. I choked up.”

When asked about their success rates, all of the ladies laughed.

“I only know of one divorce,” Williams said.

“At this point everyone is still married,” Pastor Kendrah said.

“All are still married,” Holly said.

Getting married in Plumas County?

Here’s what you’ll need at the office of the County Clerk-Recorder:

Both applicants have to appear in person to purchase a Marriage License. Bring your picture IDs.

If you purchase your Marriage License in Plumas County the cost is $60 and your Marriage Certificate will be registered here for future copy purchase at the cost of $15 each.

The Marriage License is valid for 90 days. If you wait longer than 90 days, you’ll have to purchase another one.

Some things you’ll need to know

Your parents full (and maiden) names and the state they were born in.

If you’ve been married in the past, the date the last marriage ended. If it was by divorce and it became final within the past 12 months, you’ll have to bring the final judgment with you.

It takes about 20 minutes to obtain your license. Please be there by 4:30 p.m. at the latest.

Office of the County Clerk-Recorder is located at 520 Main St., Room 102, at the Courthouse in Quincy. Questions? Call 283-6218 or visit www.plumascounty.us on the Clerk-Recorder department page.