Bonita (Bonnie) van Bergen passed away on July 06, 2022, at the age of 90 years old after a long and courageous battle with heart issues and COPD.  She was determined to celebrate her milestone 90th birthday with family and friends and she did so in style on June 25, 2022. 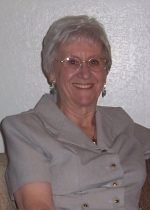 Bonnie was born June 28, 1932, in Oakland, California, and spent many years in the Bay Area raising her family of six.  Bonnie was known as “Mom” to all the neighborhood kids.  While residing in the Concord and Pleasant Hill area, she (and husband Van) made numerous lifelong friends as active members of local CB Radio groups and the Contra Costa Jeep Club.  After several years visiting and camping in Plumas County, Bonnie, Van and the youngest two children moved to Cromberg in 1978, stating they were moving to “God’s Country” where they have remained for the last 44 years.  Bonnie took great pride in her growing family. She was the ultimate party planner, ensuring every holiday and special day was celebrated together.

As a licensed Ham Radio Operator, Bonnie proudly assisted the U.S. Forest Service with critical communications during local forest fires.  She was an avid cribbage player and winner of local tournaments over the years. Bonnie was known for her loving hugs, friendly and gentle nature.  Her excellent bookkeeping and computer skills made her the “go to” for projects and computer research.  Her favorite pastimes were playing cards, socializing with friends and neighbors and caring for her home and family.

As a beloved member of the Cromberg community, Bonnie’s final resting place will be at the historic Old Cromberg Cemetery. Her wonderful personality, encouraging and positive outlook on life and her charming smile will be greatly missed by all.  She will be forever in our hearts.  The family will hold a private memorial at a later date.