It is with great sadness that we announce that our beloved Bonnie Mae Billett (Smith), 85, of Devil’s Corral, Susanville, passed away on Tuesday, February 1, 2022. Bonnie was surrounded by the love and presence of her family and friends as she battled a lengthy illness/disease of congestive heart failure. 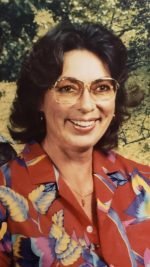 Bonnie was born on May 27, 1936, in Grand Rapids, Michigan, to Dorothy Elizabeth Pease and Raymond Kenneth Smith. She was raised in Michigan and, as a young adult, she moved to Los Angeles with her family where her father worked for the LA Times newspaper. He died shortly thereafter.

Bonnie was simply born with creative talent and there wasn’t anything she couldn’t do. She often told her story of rebuilding the engine in her Mustang with the guidance of her stepfather, Jim, at the age of 18. Yet she could also design the interior of our home with the scent and delicacy of flowers, decorating like a pro!

Bonnie, also known as Bonnie B. and Grandma B., had a curiousness about her that made her the genuine and unique, knowledgeable, and creative-loving woman she was born. Bonnie was in awe with all the wonders of the world.

Bonnie married her true love, Frank O. Billett. Frank proposed while serenading her with the song “Chances Are” by Johnny Mathis on the front porch steps of Bonnie’s first home in Sebastopol. They celebrated 64 years together on July 15.

Bonnie and Frank moved to Santa Rosa where they raised their three children, Charlie, Cindy and Yvonne. The Billett family then relocated to Susanville after purchasing their property at Devil’s Corral in 1971, former known as Korver Road. From then on, Bonnie and Frank built their own little paradise situated between the Susan River and Willard Creek, adjacent to the Bizz Johnson Trail. They loved the country and all it had to offer the Billett Family, in contrast to the fast-growing city. Bonnie and Frank’s place, Devil’s Corral, where a river runs through it.

Bonnie never met a stranger and everyone she met was a friend. Bonnie was loved so very much by so many — family, friends, coworkers and simple acquaintances alike. Bonnie was adored and admired within our community, and she was well-known as a hardworking and fair woman who demonstrated unconditional love and kindness to all. Always caring, giving and leaving an impression on whomever she met.

Bonnie was self-employed with her own company, “Bonnie’s Cleaning Service.” If you’ve ever experienced Bonnie’s cleaning, you know that she had an uncanny knack to be able to tidy up anything, anywhere, with anyone! Bonnie had an endless supply of good energy and always helped others with their projects from home interior design to exterior painting and yard development. She loved being active and loved a challenge. Bonnie had a zest for life and an eye for creating a cozy eclectic atmosphere wherever she went.

Bonnie made a good time of everything, and she loved yard sales — always looking for new treasures — and gambling, hoping to hit the big one and, most of all, spending time with her husband, children, grandchildren, great-grandchildren and extended family and friends. Bonnie made the best meals and the holidays were always festive and bright. Bonnie was also a great seamstress, making many phenomenal Halloween costumes for the children and grandchildren.