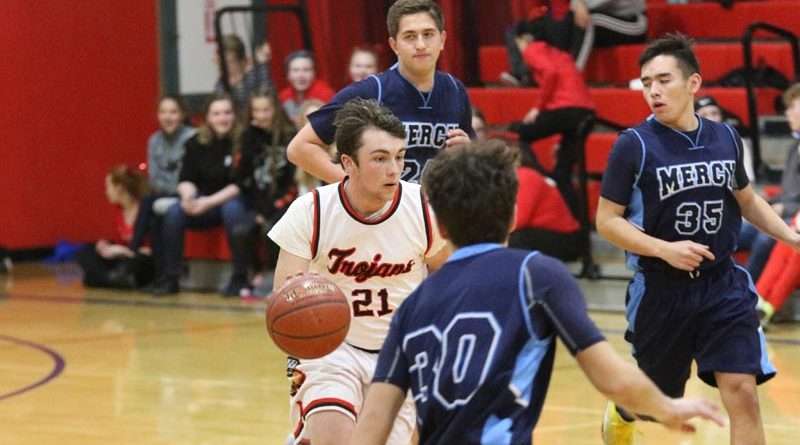 High School boys have launched into league play and here is a look at how things are going across the county.

The first league game for the Chester boys was Jan. 14 against the Los Molinos Bulldogs. The dogs were tough and won the game 58-28.

The Volcanoes took on the Mercy Warriors on Jan. 17 and the Redding Christian Lions on Jan. 21.

The next battle for the Chester boys will be Monday, Jan. 27, in Quincy. The boys will travel to take on their rivals, the Trojans, on the QHS home court. The action starts at 7 p.m.

The first league game for the Quincy boys was Jan. 17 facing Maxwell.

The Trojans will take on the Esparto Spartans today,  Jan. 22, in Quincy starting at 6:30 p.m.

The boys have a 27-game schedule and their record is 0-0 in league and 12-4 overall. The Trojan boys are coached by Keshawn Johnson.

The next game for the Quincy boys will be this Friday, Jan. 24, when they take on their rivals, the Portola Tigers at PHS. Tip-off is at 6:30 p.m. for this league game. The Trojans will host the Chester Volcanoes in Quincy on Monday, Jan. 27, starting at 7 p.m.

The first league game for the Tigers was against the Maxwell Panthers on Jan. 14. The Portola team did their best and managed to squeak by with a 49-46 victory over the hosting Panthers.

Maxwell took the lead in the first quarter as both teams held tight to defense, 8-3. The Tigers came back strong with 16 points to the Panther’s 12 to ride right up to the Panthers, but not take the lead, 20-19, by the half.

Maxwell flipped the table outscoring the Tigers in the third quarter, 16-13, to end 36-32 going into the final period. The Portola Tigers pulled out all the stops scoring 17 points and holding the Panthers to 10 points. They took the win for the first league game home to Portola, 49-46.

Senior Keegan Folchi led the Tigers all the way with 25 points. He scored four 3-pointers of 10 tries and hit six of his 10 field goals.

Senior Mario Ruiz added 9 points to the scoreboard as he hit two of his two 3-point shots. Junior Owen Bowling scored 7 points, and seniors Cody Callahan and JT Massey both added 4 points to the Tiger scoreboard.

Folchi brought in 10 rebounds, and Bowling gathered up nine. Callahan, Ruiz and Massey all picked up five each, junior Zach Mulhall picked up three and junior Elijah Lopez snagged one.

The Tigers have a 27-game season and their league record is 1-0 and 7-10 overall. They are coached by Tim Brubaker.

The first league game for the Indians took place Jan. 14 where the Greenville boys won over the Westwood Lumberjacks by a score of 61-58.

The second league game for the boys was against the Herlong Warriors on Jan. 17. They traveled to Loyalton yesterday, Jan. 21, for their third league game.

The GHS team will host Downieville for a league game this Friday, Jan. 24, with tip off at 7 p.m. American Christian Academy Eagles will come over from Anderson for a non-league challenge Tuesday, Jan. 28, starting at 7 p.m.

The Greenville boys have a 29-game schedule and their league record is 1-0 and overall they are 9-11. They are coached by Ryan Neer.