It is with profound sadness that we announce the passing of Brent Young Brewington, 74, beloved father, grandfather, friend, and longtime Plumas County resident. He passed peacefully in his sleep on Thursday, February 24, 2022, with his loving wife, Karuna (Kanda) Kanjandee Brewington, by his side in her home country of Thailand. 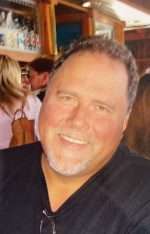 Brent was the quintessential mountain man of mystery: exploring every nook and cranny along the Feather River. He wore his heart on his sleeve, especially around those closest to him. He was a lover of art and nature, and saw beauty in the world through literature, poetry, painting, gardening, museums, music, and the happiness of children. Born in Arlington, VA, and having spent his formative years in Washington DC, Miami, Canada, and Berkeley, he eventually found his sanctuary in Plumas County. Here, he knew every backroad, where to find the best firewood, and the best rocks, which he used to build the walls and garden beds at his Wolf Creek, riverside paradise. He was also a proud member of the Coharie Tribe of North Carolina.

Most of his career was spent traveling to Los Angeles, Utah, and New Mexico in the film industry, as a boom operator, and later as a sound mixer. He worked on major films such as The Sandlot, Tombstone, Shallow Hal, and Kingpin. Brent was known for his sense of humor and had the ability to make the film crew laugh. The sparkle in his eyes, and the contagious grin on his face matched his exceptional sense of humor. Those who knew and loved him know the depth of his character.

In addition to his wife Kanda, Brent also leaves behind his beloved daughter, Anna Brewington Abdo, son-in-law Atiyeh Abdo, granddaughter Clara Abdo, grandson Canaan Abdo and numerous friends and loved ones. His home in Greenville, CA, was destroyed in the Dixie Fire in August 2021; sadly all photos and memorabilia of his lifetime are gone. If anyone has photos or stories they would like to share, a small memorial service will be held on his property in Greenville on Sunday, June 19th, 2022. Details to follow.