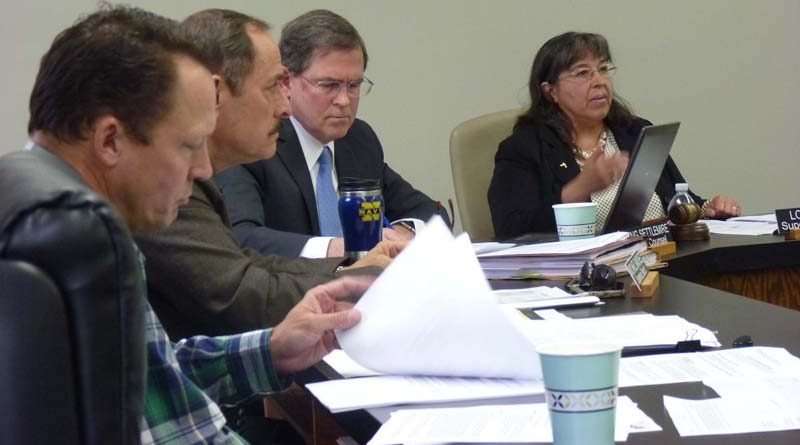 Financial issues are one of the main causes of strain in families.

The Plumas County Board of Supervisors grappled with similar financial issues at its meeting April 11.

Both the county counsel and district attorney’s offices have been dealing with an inability to retain experienced attorneys.

The county counsel’s office has recently experienced a problem even attracting new attorneys. The office received only six applications for a deputy county counsel position in the seven months since Steve Mansell left last September.

Since Mansell left, County Counsel Craig Settlemire has been trying to do the work of two attorneys.

Settlemire reported to the board, “I’d like to say that I’ve been getting all the work done but … having only one attorney in the county counsel’s office is causing delays for other departments.”

To help understand why so few attorneys have applied, Nancy Selvage, director of human resources, looked at how much 10 counties comparable to Plumas County are paying their deputy county counsels. Selvage found that Plumas County was paying the least.

Settlemire added that the his office hasn’t had a pay adjustment in eight years.

Selvage estimated that the proposed salary increases for deputy county counsel positions would add $69,000 to $85,000 in additional costs to the general fund over five years. Under her proposal, deputy county counsel attorneys would make from $31 to $37 per hour, depending on the experience of the chosen applicant.

Selvage and Settlemire also proposed adding a higher “assistant county counsel” job description to help retain attorneys after the county has trained them. This position would not be filled, but would provide an “attractive career path” for incoming attorneys to strive for, so they won’t have to leave the county once they gain experience.

Settlemire argued that hiring a new attorney with no experience in county government is “really inefficient” as it would take a lot of his already limited time to train an inexperienced attorney.

Settlemire said, “The County needs to have two experienced attorneys to handle the county’s legal work.”

Most of the supervisors seemed to agree that Settlemire needed help. However, they disagreed as to whether now was a good time to add this additional ongoing expense to the county’s general fund.

Supervisor Michael Sanchez pointed out that county revenues appear to be flat while county retirement and insurance costs are going up drastically.

He also noted that the county’s budget process, which begins in April and ends in October, is about to begin.

“I pondered over this last night, and this seems to be subverting the budget process,” he said. “I don’t want to do this now only to discover that we have to lay someone else off down the road.”

Supervisor Sherrie Thrall agreed, “I appreciate the need, but I disagree with deciding now.”

Supervisor Jeff Engel added, “Maybe we need to face the fact that we are a training ground for new attorneys,” and just assume that we will train attorneys and that, once trained, they will move on.

Supervisor Kevin Goss said he could see both sides, but that if the board voted this down he wanted the board to “put it back on the agenda ASAP,” referring to the fact that the budget process is not over until October.

Board Chair Lori Simpson pleaded with the rest of the board, “Why should we wait for something that is this critical when the county counsel is just trying to fill a position that has been vacant for seven months with someone who is more experienced?”

The board voted to wait until the budget process starts, but to give Settlemire and Selvage’s proposal the highest priority to address once next year’s revenue stream is known.

Immediately after deciding the deputy county counsel question, the board agreed to hire two new employees for the behavioral health department at higher step levels because of their experience.

Sheriff Greg Hagwood was granted permission to use $234,000 of the money the county receives from the federal government, in lieu of past timber receipts, to start building a comprehensive and independent emergency communications system.

Thrall said, “Mostly what we have been doing is duct taping the system together.” She pointed out that the Federal Emergency Management Agency told the county, following this winter’s flooding, that our current system is “antiquated and outdated” and needed to be upgraded.

The board acknowledged the county counsel’s concerns, but voted unanimously to earmark the funds for emergency communications.

At the board’s last meeting April 4, the board voted against paying $6,525 to the North State Cooperative Library System to help pay the library system’s retirement costs, because there was no evidence that the county had earlier agreed to pay for those costs.

The board voted April 11 to pay the money because the county didn’t want to lose the services provided by the North State Cooperative Library System.

Jamason told the board what tactics she used to reach audiences. She said Facebook was the most important venue in getting local people to attend.

Attendance from Reno, Tahoe and places further afield was less than she hoped it would be. She said that sending out press releases was not enough to get attention in those markets.

The event was free for vendors and for people who just wanted to drive the trail and drop in to visit the sites.

Two hundred passports were sold at $20 each, which, Jamason said, people enjoyed getting stamped at each stop. Over 160 people purchased dinners at the Sierra Valley Grange.

The event raised $1,900, which was used to pay for two $1,000 college scholarships the grange has been wanting to offer for some time.

The 30 artists involved in the event were also “thrilled” with the sales they made, including follow-up sales that took place after the event.

Jamason said the best part was how happy everyone was at the event: the farmers, artists and visitors. “People were happy all day long,” said Jamason.

Jamason said the all-volunteer group has decided to repeat the event next year, but that she couldn’t commit to keep volunteering the weeks of time she spent getting ready for last year’s event, past next year, “I just don’t have enough bandwidth,” Jamason told the board.

The supervisors congratulated Jamason on the success of the event and Thrall said she was amazed at the professionalism that Jamason brings to anything she is involved in.

Jamason asked the board to contribute to the event next year. A stipend for Jamason or other forms of county support for the event were not discussed.

Thrall told the board that her constituents in the Lake Almanor area have been losing power and telecommunications repeatedly since the beginning of the year.

Supervisor Goss noted that the same thing was happening in his district in Indian Valley.

Both districts are served by Frontier Communications. People with other service providers have been suffering outages as well.

The board decided to bring Frontier, and perhaps other communications service providers, in for a discussion of the problem.

The board accepted the resignation of Jim Green as Plumas County building official. However, the board decided to delay filling his position until its next meeting.

The Planning and Building departments used to be in the same department and the board wants to see if returning to that structure is an option for the future.