Several staffing changes have taken place over the past year at Cal Sierra Title Company, the locally owned title company that was established in 1962. Kassandra Bergstrand joined the Graeagle office replacing Kimber Conner. At the Quincy office, Carolyn Hinton retired last spring with Angela Earle joining the team and assuming her position.

After 14 years in the business office, Chris Marty also retired and was replaced by Shannon Weller. Worth mentioning is that Shannon holds the distinction of being one of the first to graduate from Feather River College with a bachelor’s degree from its newly accredited program.

Escrow Officer Lauri Griffith has returned to her roots in Plumas County to manage the company’s Chester office. She had worked for Cal Sierra’s Susanville office in the late 1990s before moving to Redding. Her mother Norma Hanson also worked for the title company in the 1970s.

And last but certainly not least, after 30 years in the industry and a 20-year career with Cal Sierra, Steve Paulsen is set to retire the end of this year and we know you’ll join us in wishing him the very best as he enters this newest chapter in his life.

“It is always a challenge when long-term employees leave, but we have been very fortunate to have found such quality replacements,” said company president David Windle.

Underwritten by Stewart Title Guaranty Company, one of the largest underwriters in the nation, they have offices conveniently located in Quincy, Chester, Graeagle and Susanville.

Three commercial insurance agents have joined the team at Flanigan-Leavitt Insurance Agency in their Susanville and Quincy offices.

Mashaun O’Malley brings her 25 years of office administration and five years as a licensed California property and casualty agent to the Susanville office. “We’re excited to have Mashaun on our team. She brings a wealth of experience and with her proven talent she’ll be a great asset to our agency and customers,” said Mike Flanigan.

Charnee’ Valentine is new to the Susanville office as well. She has secured her property and casualty license and will handle both personal and commercial clients. Valerie Flanigan said, “Her experience in customer service and her professionalism will add a lot of value to our agency and to our customers. We’re delighted to have her on our team.”

Jack Flanigan, who was born and raised in Quincy, has also joined the firm and is a newly licensed producer based in their Quincy office. He will market commercial insurance products working from the agency’s three offices. “Jack has literally grown up in and around the insurance and shows great potential,” his father Mike said. “Our staff is like our family, so Jack will only enhance that culture in our company.”

Flanigan-Leavitt is an independent insurance agency that has been in business for 15 years with offices in Quincy, Susanville and Reno. They provide a wide range of commercial and personal insurance products.

Moons Restaurant in Quincy is now open for lunch every Thursday through Saturday, 11 – 2. The historic Quincy restaurant will continue to offer its popular dinner menu featuring pastas, steaks, pizzas and assorted nightly specials beginning at 5 p.m.

Kim Carey has sold the Coffee Tree Express building on East Sierra Street in Portola along with its contents to the former KS Market owner, Sonny, who just sold the gas station and mini mart. Kim has been running the Coffee Tree Express for 25 years, the last nine years in that location. She also owns and operates a wholesale coffee roasting business under that same name on Highway 70 in Vinton. In January she plans to sell her roasted beans, both wholesale and retail, in that location adding a retail coffee shop there in February. Sonny hasn’t confirmed what his plans are with this latest acquisition. 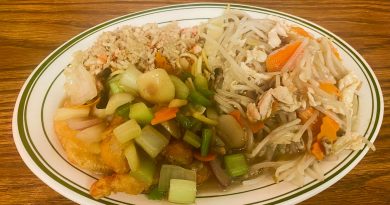