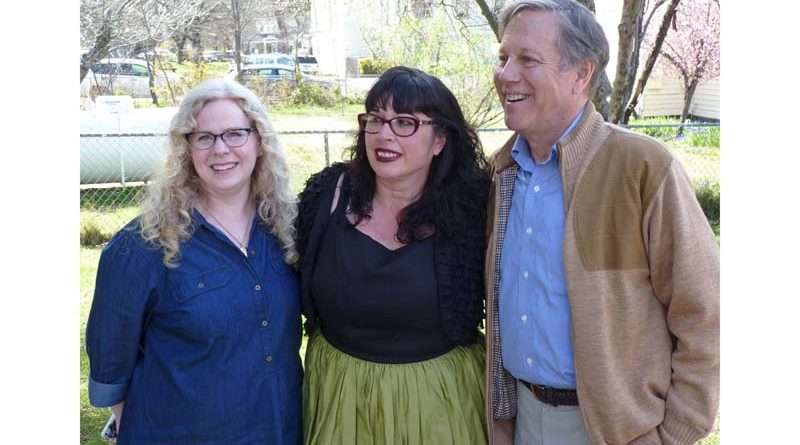 There was no pretense. No obscure meanings. Both the poet and his poetry were accessible to everyone.

California Poet Laureate, Dana Gioia and his wife Mary drove into Quincy April 3, stopping along the way to enjoy the scenery. Before his presentation, Gioia took the time to talk with people and have his picture taken.

Before each poem, Gioia explained the background to the poem. His presentation was that of a skilled actor. Not the dull, lackluster performances given by some poets.

The environment for his poems were usually some place in California. Gioia grew up in apartments in the suburbs near Los Angeles, but he moved to other parts of California after he left for college. Gioia and his family now live in Los Angeles and Sonoma County.

The poems Gioia performed were about things like walking with a pretty young girl in the spring in a blooming apple orchard in Sebastopol and being too afraid to give her kiss, losing her forever; losing a child to sudden infant death syndrome and then seeing that child in children or adults of the same age, should that child have lived; or the secret language shared only between two partners in a long-term marriage.

When the audience began clapping after each poem, Gioia suggested, “You don’t need to clap afterwards, it just encourages me.” He noted, “As I get older, I’m not trying to write ‘my’ poems, I’m trying to write ‘our’ poems. Leaving out things about me, so that the poems are personable, but not autographical.”

Gioia believes that poetry came before writing and that it has always been coupled with music and dance. He believes that this is the way poetry needs to be presented and consumed, with rhythm and movement.

“It is good for teenagers to hear great poems, said Gioia. However, he doesn’t believe that poetry should be cut off from the physical body, that students should learn poetry by reading it silently from books or, horrors of horrors, that students should be made to pick a poem apart, dissecting it intellectually, until the life of the poem and love of poetry is lost.

He is the 10th poet laureate in California’s 100-year history of poet laureates. He and his wife have made it their mission for Gioia to be the first California Poet Laureate to visit all 58 California counties. Plumas was the 30th county they have visited.

In the eighth grade, Gioia said he had to draw a map of California with all the counties on it. “For about a week, I knew where all the counties were and the names of their county seats,” he said.

As for being chosen poet laureate, it came as a surprise. Gioia and his wife decided, “We shouldn’t do this thing unless it’s going to be fun.” They do seem to be enjoying themselves.

Before his presentation, Gioia invited local poets and local students to present their poetry or poems they love.

Indian Valley poet Margaret Elysia Garcia presented a few of her poems. Quincy resident, Tommy Miles presented one of Gioia’s poems that he had memorized.

Miles was so impressed with the poem that he told himself, “You will internalize this.” One member of the audience said after the presentation, “I felt it was an honor to be present.”