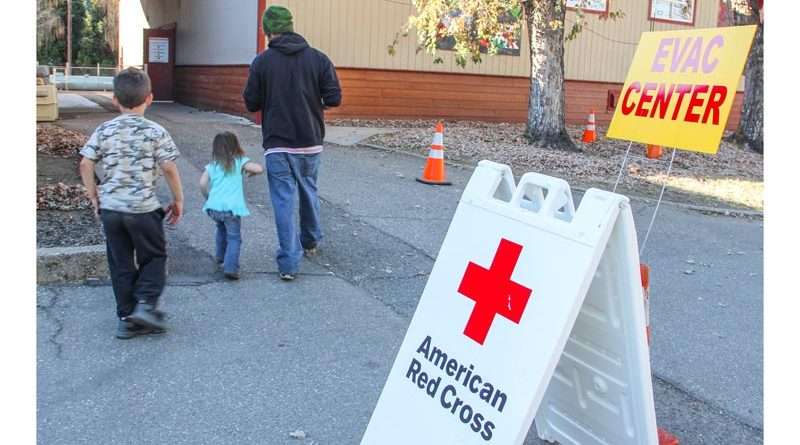 A young family that was evacuated from Paradise walked toward the Red Cross emergency shelter set up at Serpilio Hall at the county fairgrounds in Quincy. The shelter stands ready to accommodate up to 100 evacuees for the next week or more.
News
November 16, 2018November 15, 2018 Roni Java, Staff Writer

Jesse Madison of Magalia stood outside the Red Cross evacuation shelter at Serpilio Hall on Sunday, Nov. 11, at the Plumas-Sierra County Fairgrounds wearing a dazed expression and holding his family dog, Roxy, on a slack leash.

The afternoon sun shone on the dusty car in which he’d fled the raging Camp Fire inferno that broke out Nov. 8 near Pulga in Butte County. As the town next door, Paradise, was disappearing in the flames, Madison caravanned to safety with his brother and a neighbor from their quiet, paved neighborhood.

In the disaster, he was separated from his own young family and directed to a Red Cross shelter set up in Chester. With roads closed and cell phones knocked out, Madison was terrified. He had no idea until Saturday night whether his wife and children were safe or not.

Ultimately, they were, but at another shelter, and now he and other evacuees had been directed to Quincy because the Chester operation at the Lake Almanor Recreation Center was closed Sunday morning.

Chico shelters were already at or over capacity in the disaster that had forced 52,000 people to flee their homes and businesses.

The eruption of the deadly and historic wildfire happened so fast that Madison’s wife, Brook, and their two little ones, 4-year-old Eva Mae and 1-year-old Justin Eugene, were safely evacuated from another part of town, but he’d been at home getting ready for work as the night chef at Jaki’s Hilltop Café in Magalia. Brook also worked at the popular eatery, which is owned by her mother. No one knows if the restaurant survived.

“I pretty much grabbed all the wrong stuff,” Madison said, tears slipping quietly down his face as he looked at family photos and a neighbor’s video of the uncontained wildfire on his battered cell phone. “I always thought if there was ever an emergency, we’d get the kids and I’d have time to grab the money I’d been saving, our birth certificates, stuff like that.”

Waving his arm toward the car, he said, “My wife and my kids, they mean everything to me and they’re OK. This, this is everything I have in the world now.”

With only seconds to react when the evacuation order came, Madison grabbed the dog, a little clothing, some family photos off the wall, an engraved champagne flute from his wedding and raced to safety.

Soon after, he learned his entire neighborhood had been razed to the ground by driving winds and flying embers that caught everything in their path. The Chevy Suburban he’d been rebuilding was reduced to molten metal in the rubble and ash where his house stood just days before.

Now, he could only focus on the immediate things before him, charge his phone to try to reach his wife and get settled for the night in Quincy.

Other evacuees began to arrive as Madison went inside to sign in and register Roxy for the pet shelter services being set up in another fairgrounds building.

Nearby, a young mother stood watching her children rest on the lawn. She trembled and cried quietly, “I just don’t know what we’re going to do.”

Another woman comforted her and someone walked by, offered a tearful hug and said many relief efforts were underway in town and elsewhere, that the young woman was not alone, people are here to help.

“We’re coordinating getting all of the evacuated animals fed, crated and reunited with their families as much as possible,” Saez noted. “People can bring their pets and even large animals, just about anything they want. We’re set up for everything from cats and dogs to pigs, goats,  horses and more.”

Families walked in and were welcomed and oriented to the shelter.

Red Cross Shelter Manager Michael Rodriguez, a retired longtime Plumas Unified School District teacher who recently returned from 15 days serving on Hurricane Michael in Florida, said the shelter was ready to accommodate up to 100 evacuees for the next week or longer.

Many were expected to arrive from the Chester and Berry Creek areas, perhaps some from Chico shelters as well.

“We have a ham radio operator on site for emergency communications and people can stay or come and go, get information and other services here,” he said, explaining the coordination that goes into operating a shelter during a disaster.

Rodriguez advised people to register themselves on the Red Cross-sponsored safeandwell.org website.

The service provides a way for people affected by a disaster to enter information regarding their own welfare so family and friends can check their status. You can also search for people. Please note that because people self-register, the Red Cross cannot verify the information and is not responsible for any inaccuracies.

The Camp Fire started up by Pulga and, as of Sunday night, left 29 dead, some 200 persons missing and approximately 7,000 homes, businesses and other structures in ashes over more than 100,000 acres.

Pat Clark, who represents the Almanor Basin branch of the Red Cross, was busy organizing parts of the setup work and stopped for a quick comment.

“We had about 20 people staying at the shelter in Chester the last few days,” she said. “The Chico shelters are full. People are sleeping in their cars and in parking lots.”

Magalia evacuee Dorothy Weise knows just what Clark, the Almanor Basin volunteer, was talking about. She left her home of 11 years after finding an emergency message on her answering machine the day the Camp Fire broke out and began scorching thousands of acres at a time.

“I didn’t understand the message, so I called 911 and they said get out, go now!,” Weise said from her secure spot in the Quincy fairgrounds shelter space. “Not all of my neighbors got that message, but we all helped each other and everyone got out.”

William was injured helping during the evacuation and was flown with chest pains to Renown Hospital in Reno where he is recovering.

Weise said they made it to the Chester shelter by Thursday night and stayed in Almanor until they were sent to Quincy Sunday morning.

“Before the Red Cross got set up, the people of Chester took care of us at the Veterans’ center,” she recalled. “Those wonderful, amazing people brought us food, blankets and more.”

Weise added that one of the first places she made it to during the escape was the Bambi Inn in Forest Ranch where the restaurant gave every traveler free food and coffee. Butte County also sent a gasoline tanker truck to provide free fuel for all evacuees just before Highway 32 closed.

“I’m so thankful to all those people,” Weise said. “I don’t have any idea if my house or my neighborhood is still there but I know this is a challenge of faith and trust. I’m just so thankful we’re here and safe. It’s in God’s hands now.”

Shelter volunteers must be approved and certified

Want to volunteer or lend your help to the Camp Fire relief effort?

Officials ask that interested persons please do not go directly to the county fairgrounds off East Main Street in Quincy.

Shelter Manager Michael Rodriguez reminds the community that while interest is appreciated, anyone who wants to provide assistance onsite needs to be a trained Plumas County employee or be certified by the Red Cross in advance.

In-person or online classes are two of the best ways to become certified with the aid organization and more information is available at redcross.org/take-a-class .

Rodriguez said once volunteers pass the training classes and become certified, which can all be done fairly easily online, the Northeastern California chapter of the Red Cross in Yuba City is notified and will coordinate volunteers who can serve at a shelter or other sponsored facility.

Call the Yuba City offices at 673-1460 for more information.

You can also contact the Plumas County Sheriff’s Office at 283-6375 for information about opportunities to assist in the relief effort.

Register your phone number for alerts

One of the simplest ways to stay informed during a disaster or local emergency is to sign up online to register your phone number free of charge with the Code Red Emergency Notification alert system.

Plumas County and many municipalities nationwide use the alert system.

The free cell phone app is available for download to Android and Apple devices. There’s also a link and instructions on the county website at plumascounty.us.

Food items must be in sealed packaging (similar to lunchbox servings).

Please deliver donations to either of these churches. Thank you!

Donate to the American Red Cross

You can help the Camp Fire relief effort and other disaster responses by visiting redcross.org and choosing the “California Wildfires” option.