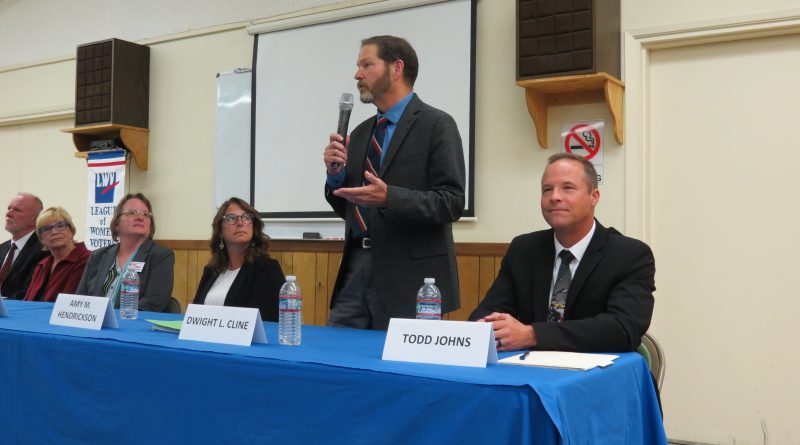 Dwight Cline, a retired Sheriff's office employee who is seeking to unseat Sheriff Todd Johns, addresses those gathered at the forum held in Greagle on May 4. Sheriff Jons is seated to the right. Photo by Debra Moore
News
May 6, 2022May 13, 2022 Editor

Plumas County Sheriff Todd Johns and his challenger Dwight Cline, a former deputy and administrative sergeant with the sheriff’s office, met up again May 4 in Graeagle for the fourth forum hosted by the League of Women Voters.

As in the past events, the two men introduced themselves and then answered questions posed by audience members via the meeting host, Linda Judge.

What does the sheriff do and why are you the best candidate for the position?

Johns said that the sheriff’s responsibilities are limited by law. For example there is no requirement to respond to calls, but “Of course we do.” In addition to being the coroner, and having the responsibility to call for evacuations and repopulations, the sheriff can declare a disaster and a state of emergency. “I am the best candidate because of my experience,” Johns said.

Johns: “You have an incorporated city here,” he said of the city of Portola, and the sheriff negotiates with the city council to provide service. Johns discussed the rural nature of the county and its vast size, which can cause coverage issues. “Staffing wise Portola is pretty good, so is Quincy,” Johns said, but he said there are issues in Greenville and Chester.

Cline said Eastern Plumas is an agricultural hub, with lakes, fishing, recreation, tourism, and small businesses – but there aren’t people to fill the jobs. “Tourism is the future to make the county whole,” he said. He said a positive police presence is necessary.

How has your experience with the Dixie Fire impacted you?

Cline said that the fire reinforced the need to be prepared.

“I learned how to work with two hours of sleep over a two-month period of time,” Johns said of the nearly round-the-clock response required. Johns said that no one in the county is exempt from fire danger and encouraged individuals to be prepared. Johns said his office is buying software programs to help people evacuate. He also mentioned the relationships that he has with OES and the Forest Service as a result of the fire.

The sheriff was asked: What is your plan to staff deputies in Greenville and Chester?

Johns said that he gave a proposal to the human resources department about two months ago that would enable him to hire a resident deputy for Chester, but that it is still working through the HR office. He wants to offer a stipend to encourage people to live in the community, but even then available housing is another issue, and Johns is working with local Realtors for assistance.

This question was directed to Cline: You have a business in Portola, and are about to open another; you have a home in Reno and a special needs child, do you have time to be sheriff?

Clines said that his wife operates their businesses and that his special needs son is autistic, but a high functioning 22-year-old.

How do you handle situations with those with mental illness so that they get help and not end up in jail?

Johns said that there have been huge improvements with addressing behavioral health issues in the county, and that he is meeting with the new interim director to keep addressing the situation. He added that he is “working with specialized training in the department,” though it’s not an easy process. Johns also said that behavioral health staff mirrors the sheriff’s staff in that a lot of personnel live in Portola or Quincy, and it is difficult for them to travel to Chester quickly when needed.

“Mental health has become an obvious concern in our community, especially with veterans,” Cline said. He also discussed dealing with suicides, and the liability issues. He said properly training deputies is very important.

What’s the budget process for the sheriff?

“Our budget consists of 33 budgets,” Johns said. “Just the sheriff’s primary budget for staffing has 109 line items.”  Johns said that he is very involved in the budget and has to be thinking of what items he wants to put forward to be approved by the board of supervisors. He cited the recent request for body cameras as an example.

Cline was asked about his decision to buy signs out of county as he stated in the Quincy forum because it was cheaper .

“My signs were designed by my sister-in-law,” Cline said, and added that he has a budget work with. Though he worked with family for the signs, he said he has purchased a lot of other campaign items locally, and he would make that a priority as sheriff.

“The county has a purchasing policy,” Johns said with regard to the topic, and mentioned the  competitive bid process, though the office tries to buy within the county whenever possible.

The sheriff was asked about funding from grants and other sources.

Johns said that he ran the OHV program for almost 15 years and brought in $1 million of equipment and overtime pay. He has also written grants that provided equipment for the SWAT team, including night vision items, and computers.

Cline was asked about a statement he made saying that the sheriff’s department is top heavy with administration.

“Our budget problem is statewide,” Cline said. “The only way we are going to keep deputies on the street is to streamline.” He suggested changing some positions to non-sworn, but acknowledged  “there’s no overnight fix.”

Johns said he tried to reorganize the department when he first took over the position, but then COVID hit and plans were delayed. When he did take the reorganization plan to board of supervisors, the employees’ association overwhelmingly said no. “That’s why we remained with the current situation,” he said. He added that the only way he can pay his staff more is to promote them, which leads to the issue.

What would you do to improve morale in office?

Cline said of the employees: “They know me; they trust me.” He said it’s the employees who initiated his run for sheriff. He added that it “doesn’t detract from Sheriff (Johns)” but they “recognized my style and how I treated them.” He said “it’s the majority of the employees. If it were just a few, I would tell them to get over it. But it’s bigger than that.”

“It’s not a majority of people,” Johns responded. He said there are a few individuals and it’s important for him to know what those issues are. He said that he maintains an open-door policy and has never retaliated against anyone. Johns said he hopes these employees will come to him when this race is over.

“I wouldn’t stake everything I’m doing on just a couple of employees,” Cline responded and mentioned that parents approached him also.

Johns responded, “We have some employees who have forgotten that they’re public employees.” He then turned to the positive, noting that nearly all deputy positions were filled, and there were only two dispatcher positions open. The challenge remains to staff the correctional facility.

Plumas County residents should receive their ballots beginning next week. The county elections office is mailing them out May 9 and they must be returned or postmarked by June 7.