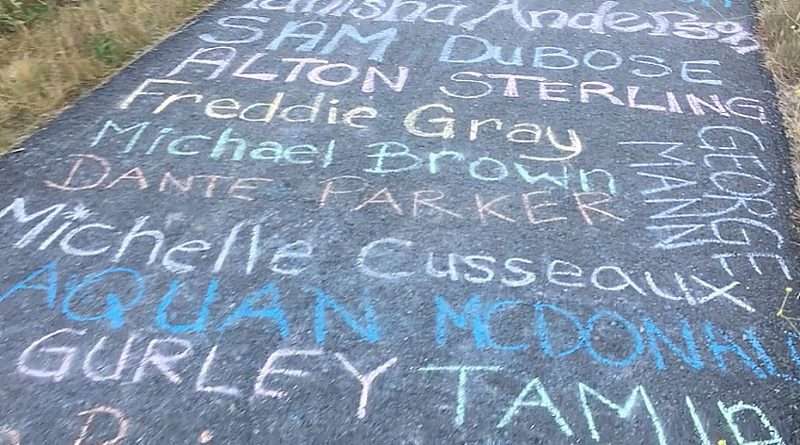 Names associated with the Black Lives Matter movement line a portion of a popular Quincy bike path. While some labeled it free speech, others called it vandalism and the Plumas County Counsel's office is researching the issue. Photo submitted
News
July 14, 2020July 16, 2020 Editor 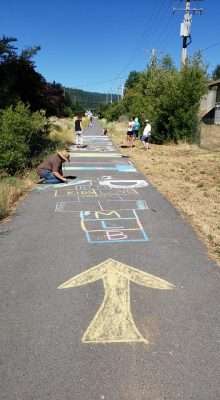 Those who walked or rode along the bike path that meanders through Quincy this past weekend might have seen more than the usual scenery. A group of local residents used a portion of the path, that runs parallel to Lawrence Street, to share a message in support of Black Lives Matter. Writing and drawing with colorful chalk, the path was strewn with the names of individuals linked with the movement, along with artfully drawn messages.

An invitation posted on Facebook asked the community to participate in chalking the bike path on Saturday, July 11, at 9 a.m. “The idea is to continue to spread awareness in our community of systemic racism that is occurring throughout our country,” the invitation read. “Please come prepared with chalk and an idea of BLM messaging, names of victims, or other. Invite a friend and let’s get chalking about these issues.”

James Wilson, whose wife Amy Napoleon, organized the event, said that about 10 adults and a couple of children worked on the path. When asked how path users reacted, he said, “You could tell which ones supported it and which were visibly upset by it.”

Those who didn’t embrace the new chalk art, complained to authorities, which prompted the county’s public works department to ask crews to remove the messages. By Tuesday morning, removal was underway.

The matter reached Plumas County Supervisor Lori Simpson, who represents the area. “Is it vandalism? Is it free speech? I turned the matter over to Craig (County Counsel Craig Settlemire) who is researching it now,” Simpson said.

Some social media users — where the merits of the chalk art are being debated — cite case law that weighs in favor of it being free speech, not vandalism.

In the meantime, one reader of plumasnews.com and a frequent bike path walker, took the attached video Sunday, July 12. For those who are interested in seeing what is at the heart of the debate, click below.