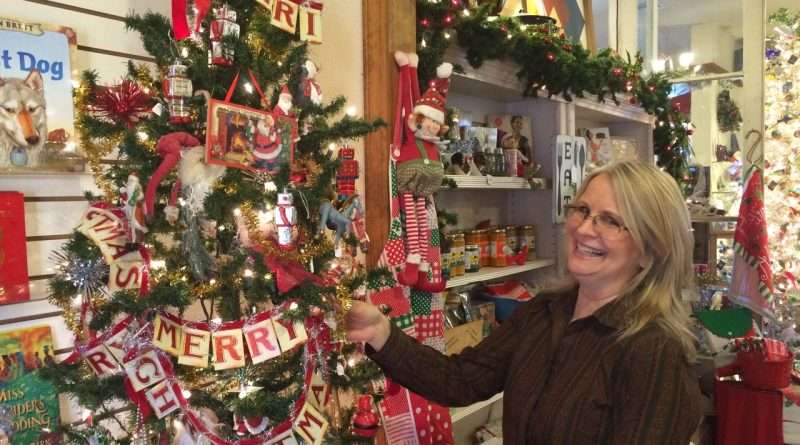 The holiday shopping season at Crescent Country this year will look a little different. Lisa Forcino begins a liquidation sale instead of an open house, as the 35-year-old store gets ready to close and re-open as a gallery and work spaces. Photo by Meg Upton
News
October 8, 2021October 12, 2021 Editor

The ‘for sale’ sign in front has been taken down—not because the building or business has been sold, but because owner Lisa Forcino is re-envisioning the space for what Indian Valley will need going forward.

Indian Valley residents have breathed a sigh of relief to hear that Forcino has decided to stay put in Crescent Mills, but beloved Crescent Country will be closing soon; the space re-imagined into something different. Crescent Country will be transformed into a multipurpose building with an emphasis on providing the opportunity for office space in Indian Valley once again, (the Dixie Fire having destroyed multiple residents’ offices and businesses in downtown Greenville).

Forcino envisions the space now to be transformed into offices with the front of the store perhaps becoming a small gallery and lending library. She is actively looking for potential tenants for the office space. Many of the existing rooms in the store need only one wall or door to transform the space. Forcino has thought about potential tenants for the space could offer massage, various therapies—

services that heal. An idea all of Indian Valley can get behind post Dixie Fire.

“We are so appreciative of the blessings, well-wishes, and support we have received in this decision,” said Forcino.

This time of year, Crescent Country is usually getting ready for its annual Christmas Open House—a weekend once shared by the now defunct Sterling Sage.  This time around however, it is a store-wide liquidation sale.

How it all started

“Over the last 35 years, Crescent Country has been proud to provide memorable gifts and antiques to the residents of Plumas County and beyond. What had started as a collection of handmade memorabilia and crafts grew into a beloved gift shop. The store’s rich history all began by the hands of one very auspicious woman,” wrote Logan Dunbar, a friend of Forcino’s on the Crescent Country Facebook page. The special woman that Dunbar spoke of was the late Barbara Tucker, Forcino’s mother.

Originally, Forcino’s parents, Jack and Barbara Tucker moved to Indian Valley in 1975 and opened the Crescent Hotel. After a few years of the business, Tucker began another business with l0 other local women. A co-op gift shop featuring the artisan works of the women in the cottage next to the hotel.

Tucker ran the shop and the hotel’s kitchen, while her husband Jack tended bar at the hotel’s bar. Their daughter Lisa served in the hotel restaurant.

Forcino discovered a love for retail once she began covering shifts at Crescent Country. While other gift shop founders eventually left to pursue other interests, the mother and daughter team remained and built a flourishing business that has been a destination and mainstay in Indian Valley ever since.

The women spent a week every year at trade show markets, hunting down unique items to sell in the shop. Jack Tucker added a touch of masculinity to the shop with vintage and western themed antique guns and other items.

The store moved from its original location by the hotel to where it is now across the street from the hotel in 1994. It was once a produce stand. The Tuckers then sold the hotel. Forcino ran the store with her mother until Tucker’s death from cancer in 2014.

Now in 2021, Forcino is ready to spend more time next door in her own house and yard that she and her parents spent a lifetime cultivating. It feels like the right time for something new—and something very much needed right now in Indian Valley.

“We hope to see all of our friends, old and new, during this time of transition,” said Forcino.

There are still plenty of holiday and gift items left in the store, and Forcino encourages people to come visit the store one last time and to think about bringing back that consignment co-op spirit in the next phase of Crescent Country.