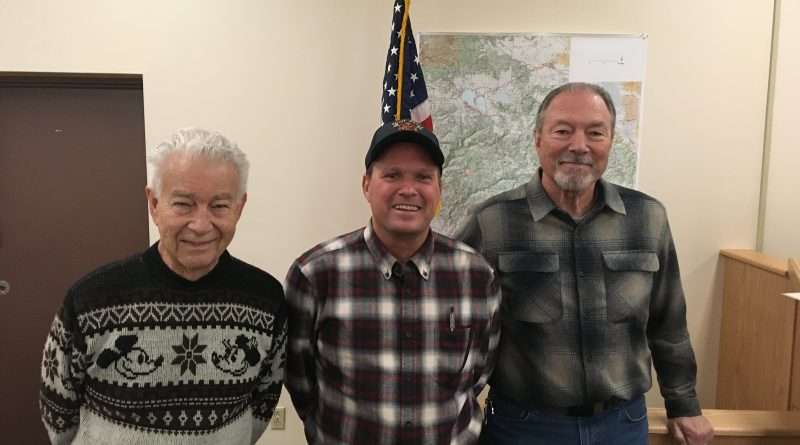 From left are Chester Cemetery Interim Manager David Price, New Board Member Ken Wilson and New General Manager Wes Scott. Scott will officially start his new position on Jan. 1, 2022 and Price will be part of the transition team working with him until mid-January. Photo by Gregg Scott
News
December 9, 2021 Editor

The Dec. 9 meeting of the Chester Cemetery District Board was called to order at 9 a.m. by Chairman George Grams with a full complement of board members in attendance. During the approval of the minutes from the November meeting, it was noted that current member Carol Morgenroth had submitted a letter of resignation effective at the end of the December meeting which means there is now a vacancy on the Chester board. Anyone interested in that position, please contact the Chester Cemetery office with a letter of interest. Many thanks to Morgenroth, who can on the board during a difficult time during Covid and the ensuing Dixie Fire calamity.

New board member Ken Wilson (approved at November meeting) was present and has already been involved in several projects involving the Prattville Cemetery. Wilson and his wife have been operating Wilson’s Camp Prattville for many years and he is also the Fire Chief for the Prattville Fire Dept.

Interim general manager David Price reported that he is well on his way to deciphering and reorganizing the cemetery’s file index card system which will soon need to be updated with both new and current family information from cemetery plot owners.  He also reported that the cemetery staff has completed five full internments which means there are no families waiting due to the fire clean-up restrictions. Clean-up and replacement of the equipment and outbuildings is under way and the backhoe is fully operational and was used for the recent internments.

The last item on the agenda was the recommendation to fill the ‘Permanent’ General Manager position. After reviewing all the applications submitted for the position, a motion was made, seconded and unanimously passed to offer the position to Wes Scott with a start date of Jan. 1.  Scott, who was present in the audience, accepted the offer with thanks to the board. The board also approved a motion to have Interim Manager David Price remain on the job as a mentor and transition aid until mid-January. Things have been moving fast and there is a massive amount of rebuilding to be done, so best wishes to the board and staff as they tackle the challenges.

With the winter months coming up the board decided to change the board meeting time to 11 a.m. The regularly scheduled day will remain the same on the second Thursday of each month. A little extra time to travel during bad weather is always appreciated. Next meeting is Jan. 13, at 11 a.m.