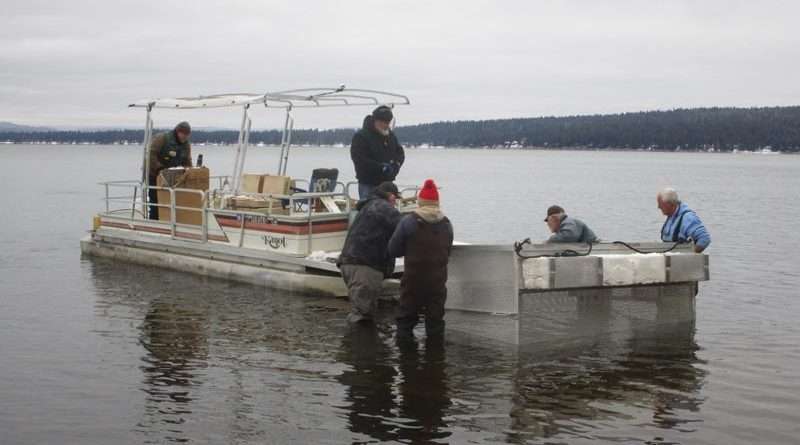 Once the delivery cage is attached to the pontoon boat a short trip to the AFA holding pens will take these young trout to their home for the next few months. They will still be well cared for with daily feeding due to the dedication of so many AFA members.
News
December 15, 2018December 12, 2018 Gregg Scott, Staff Writer

The hatchery spawns and raises Brown Trout, Rainbow Trout, Brook Trout and Eagle Lake Trout and, as an interesting point of trivia, the Mt Shasta hatchery was opened in 1888 and is the oldest trout hatchery west of the Mississippi.

After delivery, the eggs were immediately placed in the prepared hatching trays but now a special plan was needed by teacher Dallas Tognotti due to the lack of students to care for them.

No worries mate, the members of the Almanor Fishing Association, who believe in all things fishy, stepped up and with Tognotti put together a plan that would transition them from embryonic (egg) stage through hatching stage, larval stage and into juvenile stage.

With members providing regular monitoring of water temperature and oxygenation along with daily feedings, the fish are now about 3 to 4 inches long and ready to join their Rainbow cousins in the holding AFA holding pens at Hamilton Branch.

That is exactly what the project of the day was for many members as they gathered at the Chester High limnology lab Dec. 6 to load up the young trout and transport them to their new home in the Branch.

The transfer tank was pre-cleaned by Chester High Senior volunteer Tyler Davidge so it was ready to be loaded on a truck and filled with water for transport.

Once the tank is filled and oxygenated, the process of moving the fish from the six rearing tanks begins.

With several AFA members, Mr. Tognotti, and Chester students Jaime Heng and Cedrick Bearcloud using lightweight nets, the task was completed in about 45 minutes and away they went on their trip to the lake.

At the lakeside another group of members were ready and waiting with transport cage and pontoon boat to move the fish to the semi-permanent home in the lake.

Once at the Hamilton Branch boat ramp the process is identical to that of the 50,000 Rainbow trout moved into the pens in October.

This is another good example of the AFA dedication to the quality of Lake Almanor and to helping the high school in the process.