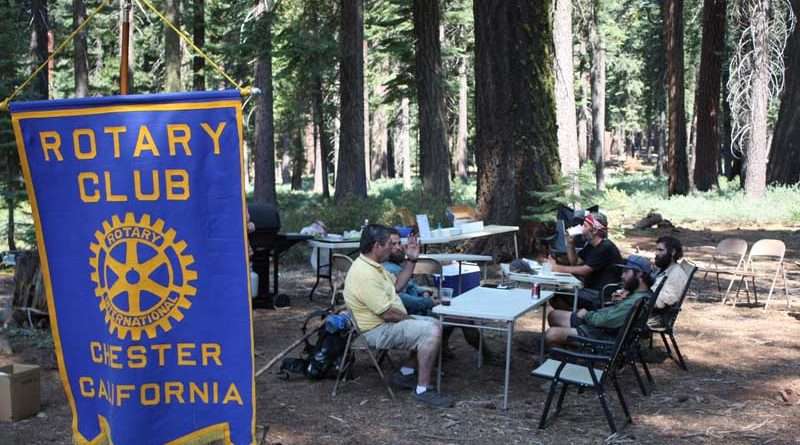 These Pacific Crest Trail hikers are ready to just sit and relax while Chester Rotary’s Trail Café is being set up. These fellows, who come from different locations, including Australia, West Virginia, Minnesota and California, met on the trail. One thing they all had in common was a fondness for milkshakes. Rotary member Terry Johnson, left, chats and finds out what they would like to eat. Photos By Gregg Scott
News
August 17, 2017August 11, 2017 Gregg Scott, Staff Writer

For the last several years, the Rotary Club of Chester has selected a day each summer to set up a temporary Trail Café at the Highway 36 trailhead in Chester on the Pacific Crest Trail.

The purpose of the Trail Café is to offer Chester small town hospitality to the PCT hikers and as a reminder that Rotary is an international organization that serves in most of the countries many of these trekkers come from.

The diversity of individuals taking on the challenge of the PCT is beyond even the range of countries and regions they hail from.

Each one has a story about why they decided to take several months out of their lives to traverse the 2,659 miles of harrowing terrain that makes up the trail from Mexico to Canada.

These folks take the challenge very seriously and are genuinely appreciative of those that take the time to make their quest a little more enjoyable.

Hamburgers, potato and macaroni salads fresh on the trail are welcomed as if it were a five-course meal.

At the mention of milkshakes, their eyes lit up like they were watching fireworks on the 4th of July.

“We only have vanilla or chocolate,” said the hosts. “No problem, that’s my favorite,” the hikers responded.

Hearing the stories of where they come from, what they do for a living and why they decided to take on the PCT is priceless.

Considering Chester is roughly the halfway point for completion, it is amazing at the positive attitudes that prevail with these folks.

Several had already heard of the hospitality offered in Chester and decided to spend a night or two before starting the second half of their adventure.