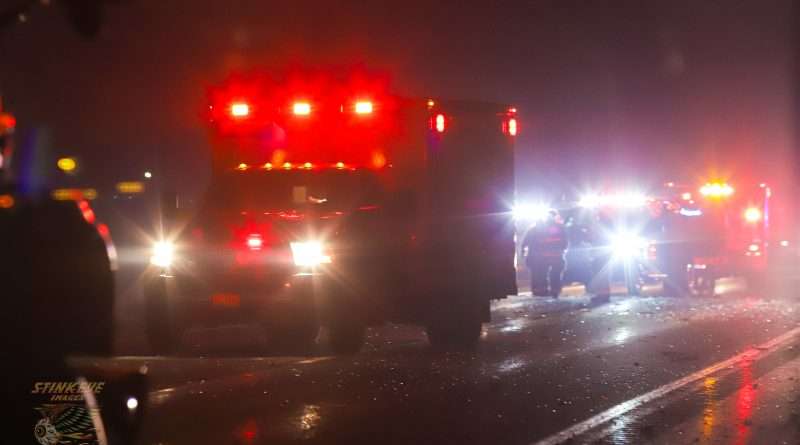 The scene of a major collision in the Sierra Valley that closed Highway 70. Photo by Jason Kincade
News
July 28, 2021July 30, 2021 Editor

It’s been a busy couple of weeks for the California Highway Patrol and yesterday Plumas News received a release about an accident that occurred in the early hours of July 25. A reader submitted photos the morning of the incident, but Plumas News waited to post them until more information could be made available.

According to the CHP news release, on July 25 at approximately 12:38 a.m., William Barnard,  22, of Reno, NV, was driving a 2007 Toyota 4-Runner eastbound on SR-70, east of Maddalena Road.
According to the CHP, due to Barnard’s level of intoxication, he fell asleep and allowed his Toyota 4-Runner to drift into the westbound lane directly into the path of Leonard Leavitt, 69, of Maclean, VA, driving a 2021 Audi with four passengers.
The eastbound Toyota collided with the Audi in the westbound lane. As a result, the Toyota overturned several times and came to rest on its wheels on the north shoulder of Highway 70. The Audi came to rest on its wheels on the south shoulder of the highway.
Multiple occupants from the Audi had to be extricated by fire personnel due to extensive damage to the passenger compartment. All occupants of the Audi were transported to Renown Medical Center with moderate injuries.
Barnard was arrested for DUI and then transported to Renown as well, with major injuries.
Both lanes of Highway 70 were blocked for approximately one hour to accommodate scene clean up.
The CHP issued a reminder “that once again, the poor choices of one individual have resulted in forever changing the lives of five others who were doing absolutely nothing wrong. Please do not drive while under the influence of alcohol or drugs.”