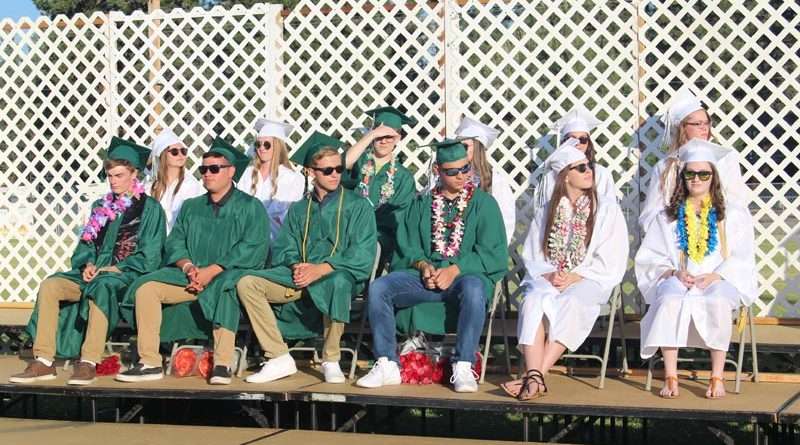 After years of study, graduates wait patiently in the bleachers for their diplomas to be awarded during the Class of 2019 Chester High School graduation ceremonies June 14. Photos by Stacy Fisher
News
June 19, 2019June 18, 2019 Stacy Fisher, Staff Writer

The Chester Jr. Sr. High School Class of 2019 were prepared to receive their diplomas before a crowd of parents and supporters in the school’s sports field on a late spring evening June 14.

During the traditional procession, 24 seniors dressed in green or white graduation gowns, individually decorated caps and dangling tassels filed down the center aisle along with teachers and school administrators to take their seats, basking under mostly sunny skies as hundreds of attendees happily watched.

A special dedication was presented by Faith Clarke, who said this year’s graduation ceremony was dedicated in recognition of the school’s beloved English and drama studies teacher, Celeste Higby, saying she was, “An amazing teacher, who has helped not only us but many past graduates throughout our high school careers,” always going “above and beyond” to help advance the students’ studies.

Next he invited Olah to give a speech to the student body and audience members.

Olah began by saying that she’d like to thank everybody who has had any type of positive impact on the Class of 2019. “’It is greatly appreciated,” she said.

Continuing, she remarked that, “I’ve been told more times than I can count that I will not be able to accomplish my dreams and goals because I’ve grown up in the sheltered little town of Chester — that we do not have much cultural diversity or the advantage of having a plethora of classes, and therefore I am at a disadvantage.

“These formidable opinions are not made by, but more by the people who don’t understand the dynamic nature of Chester. … We are not limited to less than our dreams because we are from a small town.”

Olah mentioned numerous organizations and businesses in Chester that have provided “indefatigable support” to the students, including scholarships that have uplifted many in ways that they may realize they can reach for their dreams no matter where they may have grown up.

“Not very many people have the opportunity to build the kind of relationships with teachers to make our experiences in the classroom more personal and comfortable” or “gets everlasting support from the community,” the way they do, she insisted.

“Class of 2019, if there’s one thing we should take away with us from this town” and all the experiences we’ve had living here, is that Chester is unique.”

Olah said never to let anyone tell them that they cannot succeed. “Prove people wrong and create your own path,” she said.

And finally she said, “Here’s my message to you: Dream without limitations … Live the life you dream of and make them happen.”

In addition to Valedictorian and Salutatorian honors, Hernandez noted that the PUSD now recognized academic excellence for students earning high academic grades throughout their high school experience at Chester High.

Hernandez named several students who stood up to receive their certificates, displaying different twisted colored cords with tassels on either end that hung around the students’ necks, indicating which award they had earned for high academic achievement.

Zoe Utterback gave this year’s senior speech, saying, “How quickly things change, and I am reminded how fleeting these years have been. … I admit it took a lot of thinking and brainstorming reminiscing on these years with my classmates to come up with a theme.

“I was reflecting on the gifts that each student possesses and how well everyone meshes together … like a big family with lots of kids, each distinctive in their qualities that are all able to work together as a perfectly functioning unit.”

Utterback named a number of her fellow students and how they all worked in unison as a team, whether it was the school athletes during a game, in the planning of fundraisers, after school events or as individuals in leadership roles and in their academic and artistic endeavors.

“There isn’t anything they couldn’t handle. Their determination and drive for success will surely lead them to greatness. No task is too big for them to accomplish,” adding that school was always a place of exciting discovery.

“I think I can speak for all of us when I say this class has always had something special from the get-go.”

Markie Willhoit, accompanied by Kaela Wiseman, gave a short speech on the topic of flowers, saying that, “It is scientifically proven that flowers improve emotional health … by releasing multiple chemicals within our brain to instantly make us happy. So tonight, allow us graduates to show our appreciation with the gift of flowers.”

The seniors left the stage and presented bouquets of flowers as a thank you for the loving concern shown to them by their parents and loved ones while “Time of Your Life” by the band Green Day played in the background.

For the Acceptance of Class presentation, Principal Hernandez provided official witness to PUSD Assistant Superintendent Kristy Warren, saying, “I hereby declare that these senior class members before us have met the graduation requirements of the State of California and the Plumas Unified School District” and is authorized to receive diplomas of graduation from Chester High School.

Warren responded, “As a representative of the Plumas Unified School District, I gladly accept the graduating Class of 2019. You may commence with the distribution of diplomas,” at which point Board of Trustees member Traci Holt, Hernandez and instructor Paul Hardig awarded the diplomas, calling each graduate by name one by one as they stepped forward beaming proudly.

Exhibiting a show of youthful exuberance, the graduating Class of 2019 engaged in the time-honored tradition of tossing their caps high into the air accompanied by wild cheering and applause from family and friends.