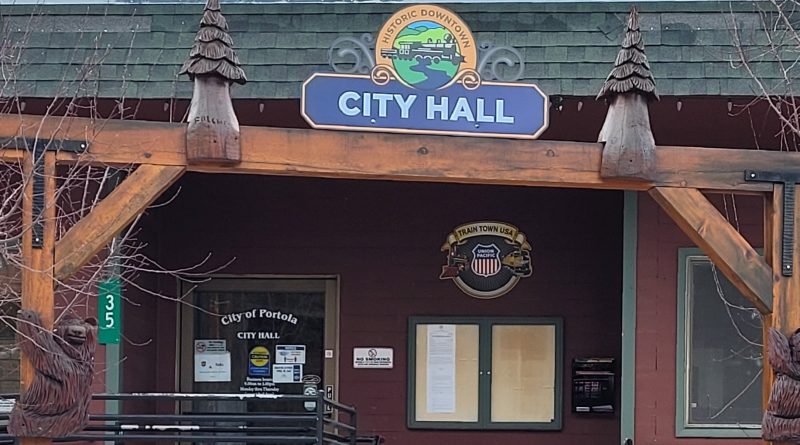 Councilmember Phil Oels reported that he had attended the recent Burn Wise event held by the Northern Sierra Air Quality Management District (NSAQMD) and had spoken.

Councilmember Bill Powers reported that he had attended a recent meeting of the transportation commission, in addition to “last Saturdays’ extravaganza at the memorial hall.” According to Powers, the NSAQMD event was very well attended.

Mayor Pat Morton reported that she had attended a meeting of the Local Emergency Services Study Group, or LESSG, as well as the first meeting of the season with the Eastern Plumas Angel Tree Program.

Interim City Manager Jon Kennedy reported that the Beckwourth Fire Department had responded to a total of 28 calls during the month of August, with seven calls for the Beckwourth division and 21 in Portola. Of the seven calls in Beckwourth area, five were for medical aide, one was for an illegal burn pile and one was for a vehicle accident. Of the calls made for Portola, 15 were for medical aide, one call went out for a lift assist and there was one fire alarm. The department also responded to one traffic accident, a lightning fire, a chimney fire and a vehicle fire in the Portola division.

“Ultimately there are still a lot of grants left- our grant totals are just under 9 million dollars and we have a lot of work to do. Thank you, Bill and Phil, for attending and participating at the event, it was wonderful,” Brown said.

Interim City Manager Jon Kennedy reported that there were nine more properties to add to the community cleanup program list since the last meeting.

“This is our monthly check in to continue with remote meetings under the emergency order,” Kennedy said. Morton clarified that she felt there wasn’t enough space for social distancing in chambers at city hall. Powers made a motion to approve with Oels seconding, and the motion passed unanimously by roll call vote.

“As you know, every year I come back and we talk about items that we don’t budget for at the beginning of the year, such as a project being approved without knowing how much money we’re going to spend,” Scarlett said. “I also want to go over the Local Emergency Services Study Group (LESSG) partner balances and set-asides council has approved over time.”

Scarlett noted that there was some unanticipated revenue, between $50,000 for the PG&E settlement and $230,000 in coronavirus fiscal recovery funds, with only $32,000 of that having been spent thus far. “The rest of that becomes an entry on the balance sheet,” Scarlett explained. Scarlett then touched on an SB2 grant reimbursement in the amount of $53,000. “We almost didn’t get the reimbursement in the same fiscal year that we put it in- that request took nearly a year to process.”

According to Scarlett, as far as expenditures, the SB2 and the LEAP (Local Early Action Planning) grant were originally approved back in 2019, with about $100,000 budgeted.

In November of 2020, council approved a match of $8,018 on an SCBA (Self-Contained Breathing Apparatus) grant with Eastern Plumas Rural Fire Protection District and Beckwourth Fire, which had come through for reimbursement.

American Rescue Plan Act (ARPA) expenditures were in the amount of $9,400 for ARPA personnel and the community cleanup, with Scarlett noting that they were approved in April 2022.

“This is all part of the money from the State and Local Fiscal Recovery Fund,” Scarlett said.

“We had a larger summer than we budgeted for and anticipated in terms of pool personnel, so we adjusted for that, and half of the $140,278 spent on snow removal will be reimbursed by the state.”

Scarlett noted that on the line item for disc golf, “a lot of people went down and worked on the Riverwalk and a lot of that was fire related for clearance and safety. Even though this could be public works, I thought it was important to identify it separately as a part of that project.”

“We never know if we will spend ten dollars or $2 million with the North Loop project, but it is 100 percent state reimbursed,” Scarlett said.

On the topic of LESSG partner balances, the partners at the end of the fiscal year still had $8,383 and the city still had $4,657 set aside.

Scarlett said, “We have obtained a three-year proposal for audit and financial statement work from CliftonLarsonAllen LLP, who are Certified Public Accountants and experts in government standards.”

The work includes completing the annual audit for the city and preparation of the financial statements. The preparation of the pension liability and the report on Gann Limit calculations are also included. The previous three years cost for all services was $32,000 per year, and despite rising costs on their part in excess of 20 percent in the last two years, they kept to the amount.

“This is highly specialized work and I recommend continuing with the services of CliftonLarsonAllen,” Scarlett said. “While there is a lead auditor, the firm changes auditors who work on our account approximately every two years, so we always have a fresh set of eyes on our records.”

It was recommended that the city council approve the use of CliftonLarsonAllen, LLP as the auditors for the city and authorize Interim City Manager Jon Kennedy to execute a three-year contract.

With no public comment, council went on to approve the proposal by roll call vote.

Council then went into closed session.